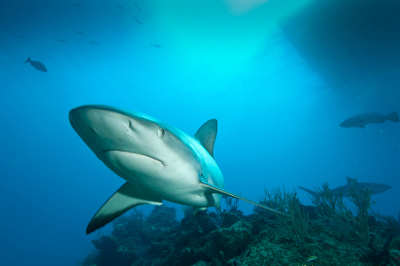 Anna Clark has long had a fascination with sharks. As a young girl, she decorated her room with inflatable toy sharks and rooted for the Great White at the movies. “I cried when they blew up the shark,” she said, joking about the finale of “Jaws 3.” Now she’s helping to save the ocean predators as the chairwoman for the Texas Chapter of Shark Stewards, a conservation organization based in San Francisco.

Clark, who is the president of EarthPeople, a consulting and communications firm in Dallas, said she was taking a break from work last fall when she read about a shocking incident off the Colombia Coast. Divers doing research in the Malpelo Wildlife Sanctuary came upon the bodies of hundreds of sharks, stripped of their fins, dead at the bottom of the ocean. The researchers spotted 10 fishing boats in the protected reserve and estimated that 2,000 sharks were killed in a harvesting method known as shark finning. 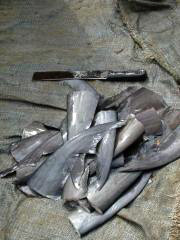 Clark, who became active in the sustainability movement in 2005 after reading about the plight of walruses affected by climate change, said she was prompted to do something.

“I’ve got to get back to why I started this,” she said of her seven-year journey as a green entrepreneur and activist. After doing some internet research, she contacted David McGuire, a marine biologist, filmmaker and executive director for Shark Stewards. She offered to do some public relations work for the nonprofit. As she learned how widespread sharkfinning was, she decided to launch a local chapter of McGuire’s organization to help spread awareness.

Clark said she sees a connection between her interest in sustainability and protecting one of the ocean’s top predators.

“If we kill millions of sharks per year, the oceans won’t be able to survive,” she said. “They’re nature’s built-in way of keeping the oceans sustainable.”

Scientists estimate that more than 70 million sharks a year are killed due to the rise of the shark fin trade. As many as 107 shark species are near extinction.

(Photo: A Whale Shark, one of many species of shark placed on the endangered list due to artisinal and commercial fisheries often seeking their fins)

Animal advocates, such as WildAid, say that shark finning is as cruel as it is wasteful. In the process, fishermen capture the sharks, cut off their fins, often while the sharks are still alive, and throw the writhing sharks back into the water, where they sink to the bottom to die.

Shark fin bans are gaining momentum. The shark fin trade has been shut down on the U.S. west coast, with bans in Hawaii, Oregon, Washington and California. On the east coast, Toronto enacted a ban last year, and last month a bill was been introduced in New York. While, these bans have impacted the industry, China still consumes the majority of shark fins in the market, according to the WildAid website.

Shark fins are used primarily in making of shark fin soup, an expensive delicacy popular in the Chinese culture. A symbol of affluence, it is served at wedding banquets and sold in restaurants for as much as $100 a bowl.

Ted Hong, a board member and former chairman of the Taiwanese Chamber of Commerce in Dallas-Fort Worth, said he has eaten the soup on occasion but believes it is time for the culture to change. Hong said he’s watched a documentary about shark finning and finds the practice gruesome.

He said shark fin soup appears to be losing its popularity among a younger generation of Asian Americans. Yao Ming, retired NBA basketball star from China, and Ang Lee, the Taiwanese film director, have come out publically against shark finning. The New York bill was sponsored by Grace Meng, a Chinese-American representative whose parents worked in and owned Chinese restaurants.

“Even in Hong Kong, there’s a movement to ban shark fins,” Hong said.

The University of Hong Kong banned the serving of shark fin soup in 2005. And in January, the Shangri-La hotel chain announced it was banning the dish at all of its 72 facilities, most of which are in Asia.

Clark said her first step as Shark Stewards chairwoman will be educating the public. She and a group of student volunteers will have a booth at Sharky Sundays at the Museum of Nature and Science in Dallas May 20 and July 22, in conjunction with the traveling exhibit Planet Shark. McGuire will be making an appearance Sept. 16.

Going forward, she plans to research the prevalence of the shark fin market in Texas. This could lead to proposing legislation that would ban the shark fin trade in the state. The group has already collected 200 signatures on its petition. (to view or sign visit - http://www.thepetitionsite.com/6/stop-the-shark-fin-trade-in-texas-and-the-gulf/)

Clark said while being green for many means buying eco-friendly building materials and recycling, protecting nature and wildlife is the driving force behind the environmental movement.

“We can’t forget about conservation.”

Julie Thibodeaux is a Fort Worth-based writer covering environmental issues, green topics and sustainable living. Previously, she worked as an editor and writer at the Fort Worth Star-Telegram. Contact her at [email protected]