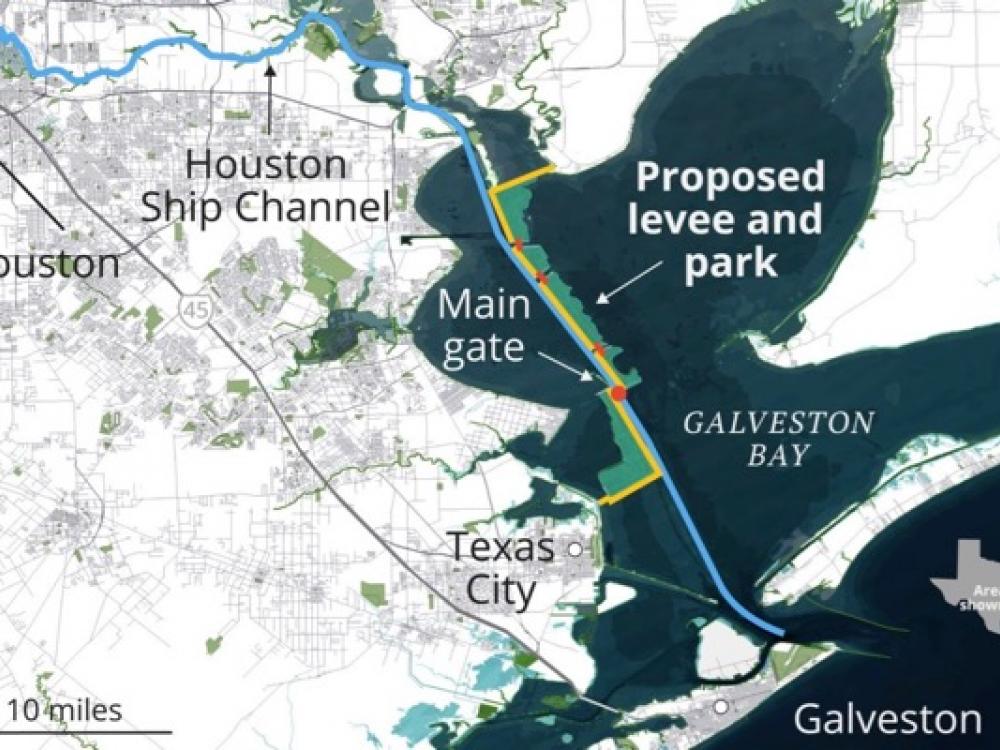 The main component of Rice University's proposed Galveston Bay Park Plan is a 25-foot-tall levee along the Houston Ship Channel that would be constructed out of clay dredged from the shipping lane. Additional dredged material would be piled behind it to form parkland. Courtesy of Texas Tribune. Connie Hanzhang Jin​.

From the Texas Tribune

For about a decade, two of Texas’ top universities have pushed dueling plans to protect the Houston-Galveston region from hurricanes.

A concept championed by Texas A&M University at Galveston appears to be winning out as the federal and state governments pursue a plan similar to one proposed by A&M oceanographer Bill Merrell in early 2009, months after Hurricane Ike smashed ashore at Galveston Island.

But that project by the U.S. Army Corps of Engineers and the Texas General Land Office, which calls for the installation of beachfront sand dunes and massive storm surge barrier gates, won’t become reality for at least 15 years — and probably much longer. That leaves plenty of time for a worst-case hurricane to devastate the densely populated, highly industrialized region — a reality that’s coming into sharper focus as sea levels rise and the ocean warms.

Rice University is pushing a plan that it says could become a reality faster and more cheaply than Texas A&M U of Galveston's $20 billion coastal barrier system.

The park plan, conceived in 2015, calls for the use of clay dredged from the Houston Ship Channel, where a $1 billion deepening and widening project is in the works to accommodate more and larger ships, to create a 25-foot-tall levee along the shipping lane, which is the nation’s busiest. Additional dredged material would be piled behind it to form parkland. The dike would connect to an existing levee at Texas City, which would be raised to 25 feet from 17 feet.

A significant amount of dredged material has already been disposed of along the channel, forming marshy islands and a wildlife management area. That means it would not have to be built entirely from scratch.

A large storm surge gate — much like ones called for in the coastal barrier system — also would be installed and would be closed only when big storms threatened the area. Like the coastal barrier system, the park plan also calls for a “ring” levee around the city of Galveston to protect it from incoming and outgoing storm surges, the deadliest effects of hurricanes. The new north-south levee, which would cut through Galveston Bay, would be punctuated by smaller gates to allow boats to pass through.

Longtime Texas environmental attorney Jim Blackburn, the co-director and primary spokesperson for the SSPEED Center, said that it could be completed as early as 2027 for $3 billion to $6 billion. It’s an amount he said is low enough that it could be funded locally, without having to wait on money from Congress, as the coastal barrier system will almost certainly have to do. The system would not, like the barrier system, protect beachfront properties on Galveston Island and Bolivar Peninsula because it would be situated further inland.

But Blackburn said it would protect the vast majority of the area’s sprawling petrochemical complex and the entire western side of Galveston Bay, which is densely populated and fast-growing. And the park plan’s overall level of protection would be much higher than the coastal barrier system’s, he said. It would guard against something like a 250-year storm and a 25-foot storm surge — about 10 feet above the highest recorded surge for the area. A weaker Category 4 hurricane — classified as a storm with wind speeds of 130 to 156 miles per hour — would probably be totally contained, he said. And it would make a big dent in a Category 5.

“We have seen sea level rise and storm scenarios that get you to 33 feet [of surge],” Blackburn said. “It’s not inconceivable that this is not high enough, but it is by far and away beyond anything that we’ve ever seen, and I think it’s the right starting place.”

He also noted the plan is multipurpose, unlike the coastal barrier system.

“The idea that we would spend all that money on the coastal spine and really have only one utility out of that is something we were at least trying to integrate into our design differently,” Blackburn said.

It's unclear whether the park plan will gain traction with the private funders and government agencies that would need to be on board before the project can move ahead. But last week, the governing body of the Port of Houston Authority, which is working with the U.S. Army Corps of Engineers on the dredging project to deepen and widen the ship channel, gave staff the green light to talk with Rice about the potential for such a symbiotic arrangement — a small but meaningful first step.

Roger Guenther, the port authority’s executive director, said the park plan is “intriguing” and definitely worth exploring. But he also said the planning phase of the ship channel expansion project is already nearing its end and it’s too late to revise it; as it stands now, the plan calls for most of the dredged material to be used to create marshes and oyster and bird habitats in Galveston Bay. That means that the park plan would have to benefit from future dredging that could be years away.

“I think the next round of [ship channel] improvements might offer a great opportunity to use some of that dredged material for the things they’re talking about,” Guenther said. “We’re at the point now where we want to look at that with them.” 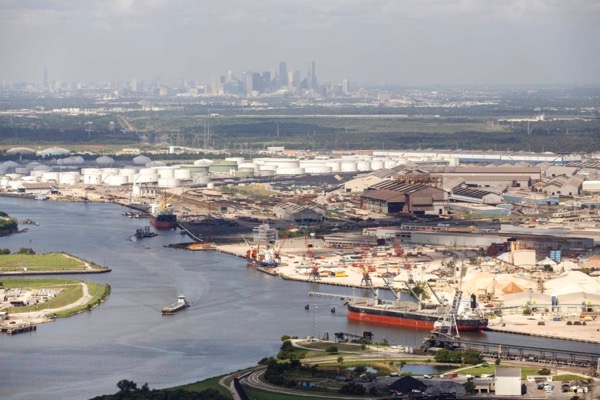 Refinery complexes along the Houston Ship Channel. Photo courtesy of Michael Stravato of The Texas Tribune.

Blackburn said it may indeed be too late, but the SSPEED Center plans to pursue a separate federal permit from the Army Corps of Engineers for the project that could add it to the already-approved dredging project — which could still be years away from receiving funding from Congress. The center's project would need several years to go through the Army Corps' vetting and study process.

It’s “sort of a once-in-a-lifetime opportunity with all of that raw dredged material being generated,” Blackburn said. “You’ve got to take advantage of those opportunities, in my opinion, when they show up.”

He and Guenther both discussed the possibility of local funding, including from the private sector. If the park project can’t use dredged material from the ship channel project, Blackburn acknowledged its price tag would be much higher.

The plan faces other big obstacles, too.

For one, the SSPEED Center won’t be able to submit a permit application on its own; it will first have to secure a local sponsor, which is typically a governmental entity. Blackburn said the port authority probably makes the most sense, though Guenther said that hasn’t been discussed yet.

The center also is seeking funding to flesh out the design, which will be expensive. Blackburn said the Army Corps’ permitting department has urged the center not to submit an application that consists of only “lines on a map.”

But she said it would likely have huge environmental impacts that the center has not yet studied. It would eat up thousands of acres of Galveston Bay and hinder water circulation in the bay that's crucial for marine life. She also cast doubt on the estimated price tag, noting that the proposed gate system is comparable to the one included in the coastal barrier system, and that one is estimated to cost as much as $11 billion.

“I believe they are off,” she said.

In a recent white paper, Blackburn described the park plan as an alternative to the coastal barrier system, which he said was too expensive and not protective enough. But he now says he sees it as complementary.

“They are working to see what they can develop at the coast, but we’re going to go ahead and get this thing underway,” he said.

Disclosure: Texas A&M University and Rice University have been financial supporters of The Texas Tribune, a nonprofit, nonpartisan news organization that is funded in part by donations from members, foundations and corporate sponsors. Financial supporters play no role in the Tribune's journalism. Find a complete list of them here.

Kiah Collier reports on energy and the environment for the Texas Tribune, where she began working in July 2015. Since graduating from the University of Texas at Austin in 2009 with degrees in philosophy and multimedia journalism, Kiah has reported on government and politics for publications across the state, including the Austin-American Statesman and the Houston Chronicle.