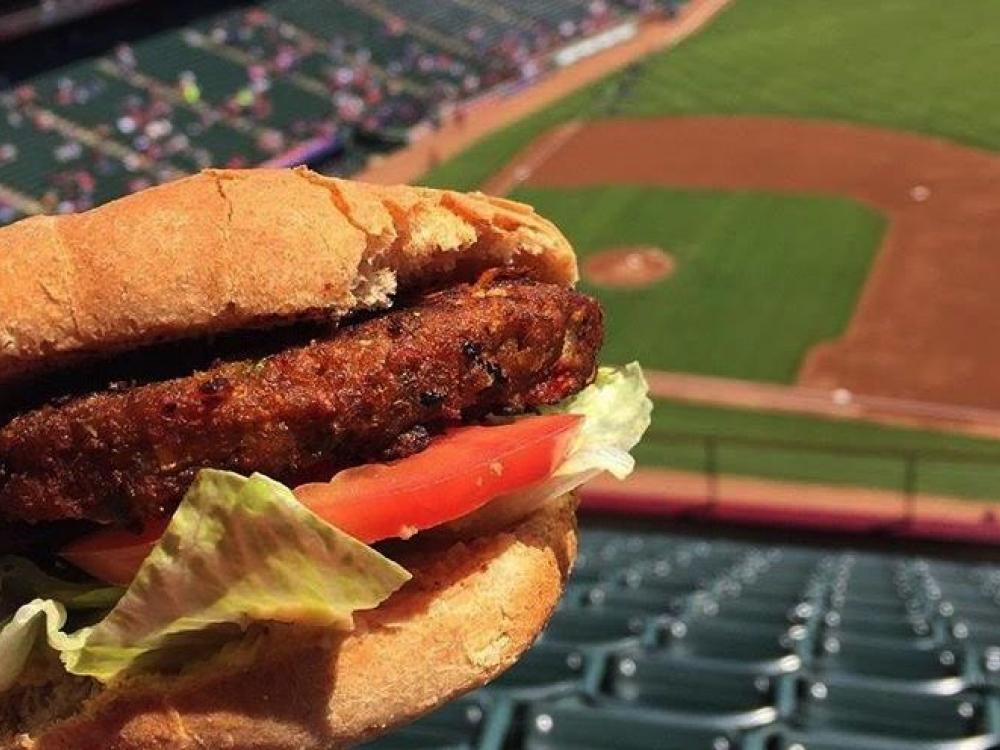 When it comes to the Texas Rangers’ experience, there’s the baseball and then there’s the stadium food. Which is why meat-crazed fans are willing to vacate their seats at Globe Life Park and stand in line for artery-clogging atrocities like this season’s $27 Wicked Pig, a new pulled pork sandwich enhanced with bacon, sausage, ham, prosciutto and pork rinds. But with the arrival of Ballpark Vegan, the stadium’s first exclusively vegan food cart, their meat-aversive counterparts have found something to cheer about too, and stadium officials say they’ve been flocking to its Section 16 location by third base this spring. 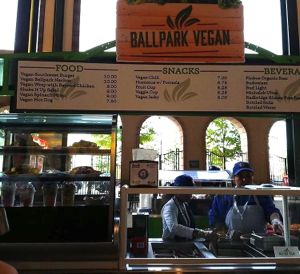 To celebrate, the Rangers have dubbed May 14 Vegan Day, inviting members of groups like the North Texas Vegans and Veggie Texas Rangers Fans to come out to enjoy Ballpark Vegan’s menu during the 7:05 game against the Toronto Bluejays.  Along with organic beer served at the food cart, incentives include a giveaway of 15,000 second baseman Rougned Odor bobbleheads and a post-game concert featuring country singer and songwriter Cody Johnson.

The Ballpark Vegan stand is located in Section 16 near third base.

For countless seasons, items like fruit, salad, hummus and of course peanuts, have been available for those with healthier appetites, but with Ballpark Vegan, the stadium has upped its game. The stars of the vegan cart are typical ballpark fare like nachos, burgers, hot dogs and chili, sans the meat and animal by-products. There’s even a vegan jerky, and concessionaires say staff sampled 10 different varieties of the latter before settling on a textured mix of soy and shitake mushrooms from Primal Spirit Foods, a product thought to please vegans and omnivores alike.

“The point was to have typical, heavier offerings that look like what everyone else is ordering and have them taste good enough for anyone to eat,” says Casey Rapp, general manager for Delaware North Sports Service, the stadium’s concession company.

Rapp adds that feedback regarding the vegan-centric food cart and the flavors found there has been positive and “surprisingly strong,” with the veggie burger leading Ballpark Vegan’s sales initially until the vegan hot dog recently jumped ahead in mid-April. 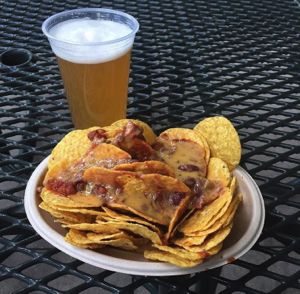 “At our last game, I think we sold 201 hot dogs and 199 burgers,” Rapp says. “After that, the veggie wrap with the fake chicken is very popular, followed by the nachos.”

Rapp credits diehard Rangers fan Twalla Grant with alerting him to the need. A resident of the McKinney area who switched to a plant-based diet several years ago, Grant says she only attends about two games per month, but loves her time in the stands and thinks vegan fans should be able to enjoy messy-food options comparable to what their friends are consuming — a nice tray of nachos made with Teese nacho cheese, perhaps, or a black bean-based Guiltless Gourmet burger and a chicken wrap or chili featuring Beyond Meat’s non-GMO pea and soy protein.

“Other vegans and vegetarians also get irritated by not having things on the menu that they can eat, but I guess they just go away quietly,” Grant says. “I made it a point to complain instead. … I started emailing Casey about it and, basically, pestered him for about two years.” 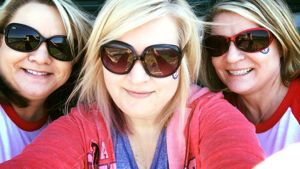 “There were a surprising number of options out there,” he says, adding that he and about a dozen other Delaware North employees took the taste-testing process seriously. “Actually, there are a lot of vegan cheeses, but it can be hard to get the consistency right if it gets cold. We wanted the vegan nachos to compare well to our regular nachos. It’s important to be able to serve a fresh, consistent product every time.”

Vegan Twalla Grant, center, with flexitarian friends Rachel Hernandez and Coline Wood, was the Rangers fan who launched a campaign to put vegan offerings on the stadium's menu.

Grant says her “omni boyfriend really liked the nachos,” and she notes that feedback from her peers points to a satisfied crowd regarding other items like the vegan chili and two versions of a spinach wrap, one filled with veggies and the other, with Beyond Chicken added.

Inspired by Veggie Happy, a website that tracks vegan offerings at major league baseball stadiums, Grant also started a Facebook page in 2014 called Veggie Texas Ranger Fans, and with more than 350 followers, she says even she’s been surprised by how many other Rangers fans shared her point of view. Now she volunteers as a Veggie Happy manager and compiles comments from other vegetarians and vegans who email her at veganrangersfans@gmail.com about the Ballpark Vegan items.

Rapp expects there will be more tinkerings to the menu: Already, Delaware North has responded to complaints about a slow line and requests for a vegan dipping sauce to accompany the wraps. And Grant says she hopes next season might bring vegan offerings to higher traffic areas — perhaps closer to first base, her preferred seating — or even a second cart.

Elaine Rogers is a Grand Prairie-based writer and former features editor at the Star-Telegram who has written for Dallas Child, D Home, Delta Sky and Women's Sports & Fitness. Rogers is a pescatarian who loves trying out vegetarian recipes and has an interest in all things green. Contact her at Elaine.Rogers@tx.rr.com.