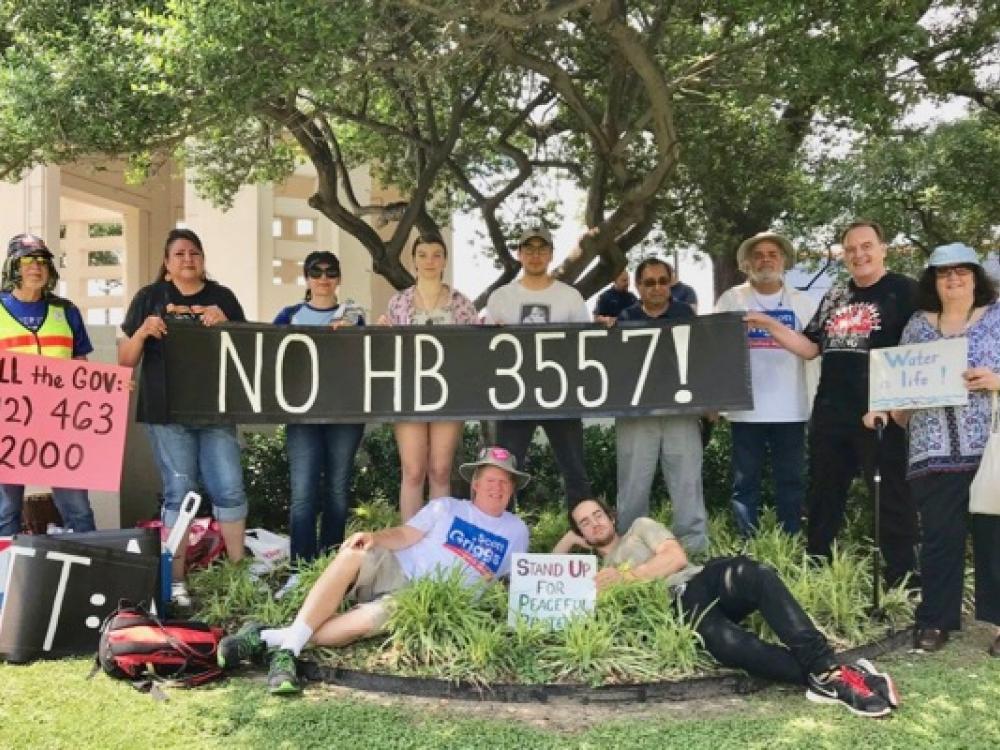 The 64th Texas Legislature’s efforts to criminalize public protest is all over — but the shouting. And the signing.

As of May 27, House Bill 3557, the “Critical Infrastructure Protection Act 3, appears to be a done deal.

But there was shouting last Saturday in Dealey Plaza in Dallas as about a dozen demonstrators urged Governor Abbott— “Do NOT Sign HB 3557 into LAW!” A rally is planned in Austin June 15.

It’s public pushback to a shocking legislative turnaround at the Capitol at the end of May.

On June 1, Dallas activists shared the same concerns about HB 3557 voiced by thousands of Texans in calls, emails, public testimony and protests at the legislature since the bill’s introduction by Rep. Chris Paddie (R-Sherman) in March.

HB 3557 is one of a number of similar bills passed already in the Dakotas, Iowa, Louisiana and Oklahoma that are the product of the American Legislative Exchange Council. ALEC brings elected public officials together with lobbyists for powerful corporations such as Koch Industries, owned by the right-wing billionaire Koch brothers. They work "behind closed doors to draft so-called model bills without public input," according to the Center for Media and Democracy campaign.

Opponents of HB 3557 came from environmental, public interest, free-speech, farm and ranch owners’ and indigenous peoples’ groups to protest the bill that the Dallas Center for Peace and Justice had described as a direct effort “to intimidate activists and concerned citizens into silence.”

To silence opposition, that is, against industrial sites involved in many recent disasters and devastating long-term pollution. Incidents include widespread pipeline ruptures; chemical plant breaches near Houston; agricultural pollution of the Mississippi River fouling the delta and Gulf; abusive treatment of landowners and their livestock, water and soil on private land crossed by oil and gas pipelines; damage to Native American lands and destruction of sacred sites protected by U.S. treaties. All were incidents occurring in Texas, adjacent states and around the U.S. 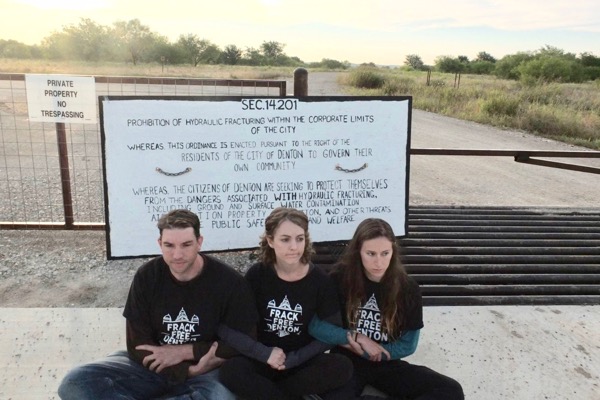 Alarm rose among activists when HB 3557 was introduced. As passed in the House before it was sent for consideration by the Senate, the measure made a state jail felony of peaceful demonstration. This it defined as “entering…a critical infrastructure facility with the intent to destroy the facility OR impair or interrupt the operation of the facility.”

Actually impairing or interrupting a facility’s operation bore a second-degree felony charge, as did destroying the facility.

Under the bill, state jail felony penalties could be enforced on protestors who, like members of Frack Free Denton in 2015, blocked gates to a gas well site if they were on private property. That's just one of numerous actions by residents frustrated after years of unsuccessful city negotiations with uncooperative operators for health and safety restrictions on urban drilling.

Environmentalists lobbied in the legislature to block the bill or reduce its penalties. On May 20, Texas Campaign for the Environment, leading the effort, declared a modest victory.

The bill, having reached the Senate, had been amended in committee with lesser penalties. The amended bill dialed back felony charges for demonstrating and hampering operations to Class A misdemeanors. The full Senate passed it in a floor vote.

However, conviction for impeding operations still meant up to a year in county jail and/or a fine of up to $10,000. Mere presence on a property “with intent” to slow or shut down operations could result in a $4,000 fine.

“It is a great relief that our legislators recognize the difference between interruption of critical infrastructure and destruction, especially in regard to the construction phase,” wrote Lori Glover of Big Bend Defense Coalition in Alpine. “This all boils down to financial losses for pipeline companies when forced to slow down and truly address legitimate community concerns about risks and long-term impacts. The reality is the number of incidents and the costs of property damage from protesters nationwide are minuscule compared to more than $3.4 billion in damages from pipeline failures, not to mention over 100 documented fatalities.” Glover was quoted in a Texas Campaign announcement after the Senate vote.

Texas Campaign for the Environment director Robin Schneider said that more than 3,000 emails and phone calls in opposition had reached legislators.

“Thanks to the concerted efforts of thousands of Texans contacting their lawmakers, HB 3557 is much less threatening than it was when filed…in this version no peaceful protester will be at risk of felony charges,” she said.

But on a weekend, late in the night on May 26, that limited victory fell apart in the last 25 hours that House and Senate could take any action this session.

The House refused to concur in the bill that had passed the Senate, calling for a conference committee. At 11:15 p.m, the committee, five members from each chamber, voted 7 to 3 in favor of the original House version, felonies all around.

On May 27, both chambers convened and voted to approve the conference committee’s decision.

"The misdemeanor for intent to impede or interrupt remained a misdemeanor but the actual impeding or interrupting went up to a state jail felony," said Schneider via email.

"We are sad to say that HB 3557 was passed by both the Texas House and Senate tonight. We were hoping that a senator would have the courage to stand up and filibuster the bill, and asked several to do so. Unfortunately none did, and so Texas landowners, Native nations, and water protectors will have to have the courage to face years in prison for peacefully resisting polluting industry.”

“Thank you to the thousands of Texans that spoke out against this bill. We… will be working in the months to come on holding our legislators accountable for this attack on free speech and the environment."

Within hours of the final vote, TCE had posted the voting record of legislators who passed the hardened reiteration of HB 3557.

How likely is the governor to be swayed from signing HB 3557 by the “Do Not Sign” rally?

“Not very likely,” said Schneider. “But he has the authority to take an interest in civil rights, and to make his own decision.”

On Monday, on Texas Standard, the radio collaboration of public radio affiliates and University of Texas, a commentator noted that the governor can let a bill become law without his signature, if he chooses not to call public attention to it.

What: Demonstration against House Bill 3557, the “Critical Infrastructure Protection Act 3, which increases penalities for peaceful protest. The bill passed through both the Texas House and Senate is awaiting Governor Abbott's signature.

Where: Bus taking Dallas activists to rally at the state capitol in Austin.