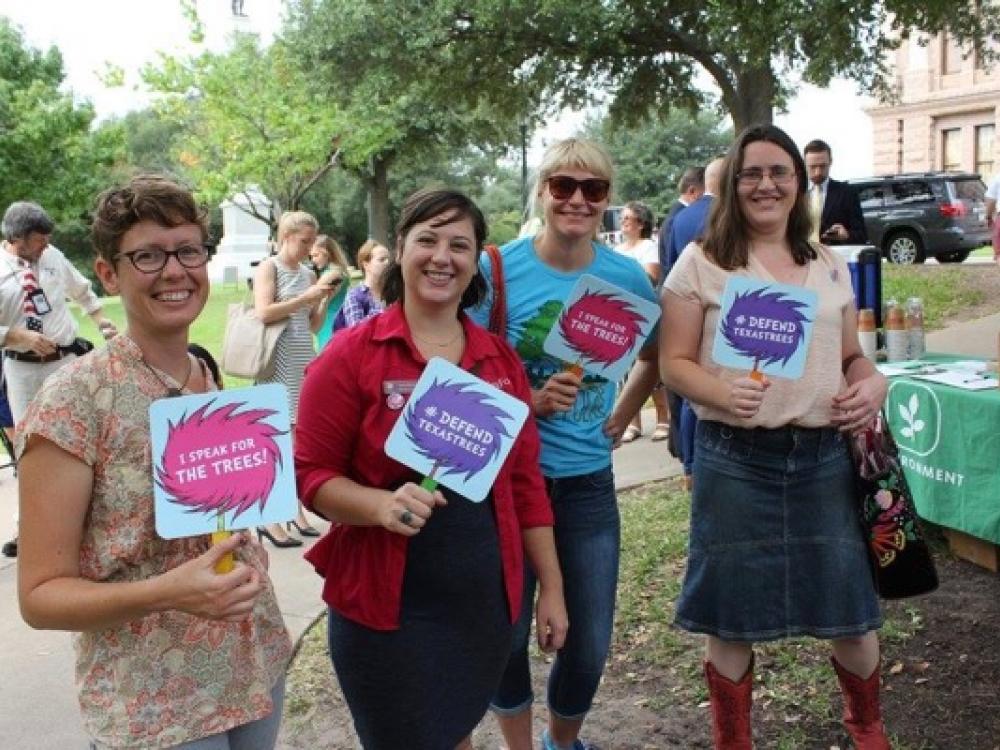 Tree supporters attended a reading of the Lorax at the Capitol in Austin Aug. 2. Photos courtesy of Defend Texas Trees' Facebook page. 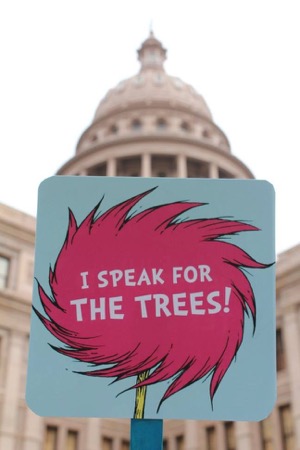 Last week ended the fight over local tree protections in the Texas Legislature. Homeowners, city leaders, tree professionals and 20 or more health, citizens’ rights and enviro advocacy groups turned out in their defense. They crowded hearings and bombarded representatives with calls, petitions and emails throughout the regular and special sessions.

And the public won. For now.

Gov. Greg Abbott, the Senate under Lt. Gov. Dan Patrick, right-wing think tank Texas Public Policy Foundation, and powerful homebuilder and developer lobbies led the campaign to preempt local rules on tree removal. At stake in two bills was the ability of cities and counties to restrict “in any way” property owners’ removal of “trees or other vegetation.” These measures could have allowed clearcutting without even a permit.

The effort ended with a last-minute rejection in the House of Senate amendments to the one bill left in play, House Bill 7. It was originally a measure whereby city tree removal fees could be offset by tree planting. In the special session’s last days, the Senate attempted to turn HB7 into a bill to preempt local ordinances. Andrew Dobbs, legislative counsel for Texas Campaign for the Environment, was there.

“There are a couple of changes…it sets different levels of rebates on tree removal fees for homeowners and developers but it’s still essentially just a fee mitigation bill. Every tree ordinance in the state is still in effect today.”

The final HB7 compromise bill does restrict cities from charging mitigation fees for tree removal to homeowners for trees with trunks less than 10 inches in diameter. It requires cities that charge fees to allow property owners to offset fees by planting trees, under rules the municipality prescribes. And it sets percentage amounts of fee rebates.

The worst of the Senate’s changes are gone, including a $400 limit to tree mitigation fees, regardless of tree size, age or value. And a ban on cities’ regulation of trees in their surrounding areas, known as ETJ’s (extra-terrestrial jurisdiction), the undeveloped land that’s prime target for developers.

Only a few cities in the state have tree ordinances that apply to homeowners.

“I went to all the hearings, both sessions,” said Alles. “Public opponents to the bills outnumbered supporters 10 to one. At the biggest hearing on the most destructive bill, Senate Bill 14, 100 people spoke or registered against it. Only two people spoke for [it']."

"There was no 'fact’ testimony of people aggrieved by tree ordinances in any of the hearings," Alles stated, contrary to claims by Gov. Abbott that residents’ private property rights were being violated by city regulation. “This was the most people by far who have ever turned out for a tree issue in the legislature, and I’ve been going for four sessions.”

“This was the most people by far who have ever turned out for a tree issue in the legislature, and I’ve been going for four sessions.”

The energy behind the effort, and the turnout it generated, is the story behind the headlines.

A coalition of 21 citizen groups of many walks banded together as Defend Texas Trees to do what their name says through an online and event campaign to the public and their members. TreeAct,  an ad hoc action effort, mounted a website with legislative updates.

Texas Campaign for the Environment, the nonprofit that does door-to-door canvasses on many environmental issues, generated 1,800 calls and 5,265 petition signatures to legislators, said North Texas director Corey Trioani.

“The calls came directly from our door-to-door canvass, the petition signatures came from TCE emails as well as emails from others in our coalition.”

“We did everything we could in every part of the state, and it worked,” said Dobbs. “The lawmakers felt the pressure. The result was the major threat to Texas trees that we were facing with the governor behind it, the Senate behind it, powerful lobbyists, was stopped, because the people of Texas stood up.”

Mary Graves, president of the Texas Historic Tree Coalition, also celebrated the outcome in an email statement to members while urging tree advocates to remain vigilant.

"Local ordinances still stand, but we lost a little bit of ground on residential requirements," said Graves. "At least home builders can’t remove all trees without replacement. The biggest threat, the one from commercial builders and developers, was far greater. That has been thwarted. For now."

Tree advocates should be prepared to mobilize, she said.

“We anticipate opposition to continue in the next session.”