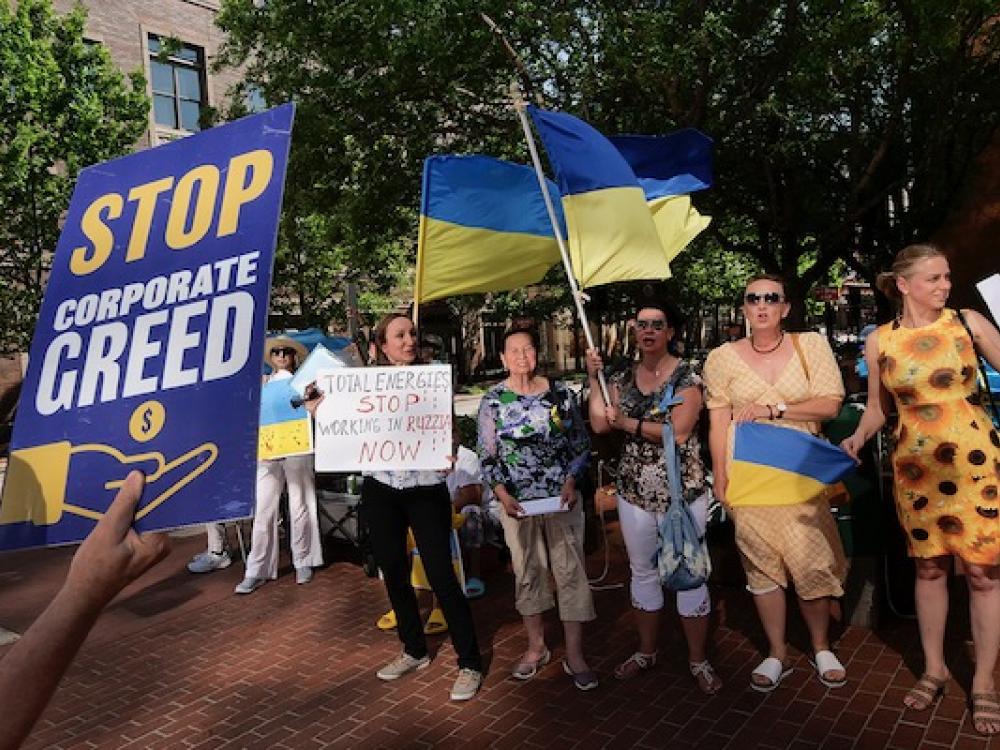 Natalia Carter, left, holds a sign with activists gathered in front of the TEEP Barnett's Fort Worth headquarters. Photo by J.G. Domke.

A group of activists gathered outside TEEP Barnett, the Fort Worth headquarters of TotalEnergies, yesterday to protest the gas driller’s investments in Russia.

TEEP Barnett, which took over Barnett Shale operations in North Texas from Chesapeake Energy in 2016, is an affiliate of the France-based energy giant, TotalEnergies, the world’s fourth-largest oil and gas company.

According to its website, TotalEnergies is a 19.4 percent shareholder in Novatek, Russia's second-largest natural gas producer. Total holds a 20 percent stake in Yamal LNG, a project in Russia that started up in December 2017 and produced more than 18.8 million tons of liquefied natural gas in 2020.

There has been some international criticism of the company over its continued business dealings with Russia.

“Total is propping up Putin by being so heavily invested in one of Russia’s most important industries,” said Natalia Carter, a Fort Worth-based environmental activist, with family ties in Ukraine. “We’re here to call on Total to take action and stop economically supporting a regime that is committing atrocities against Ukrainian citizens.”

Total released a statement regarding its business ties to Russia on Wednesday:

“Russia’s military aggression against Ukraine is a tragedy and we can certainly understand the emotions this generates across the world, including right here in Fort Worth where a protest is set to take place.

“Our Company has clearly stated its firmest condemnation of Russia's military aggression against Ukraine, which has tragic consequences for the Ukrainian population and Ukrainian people around the world.

“TotalEnergies has stopped purchasing Russian crude and petroleum products and is no longer investing in Russian projects. Our Company does not operate any oil and gas fields, or any liquefied natural gas plants, in Russia. Furthermore, TotalEnergies announced on March 31st a $4.1 billion financial write-down after withdrawing from Russia’s Arctic LNG 2 project where it had a 10 percent stake.”

However when asked about the company's investment in Novacek, a Total spokesperson declined to comment. 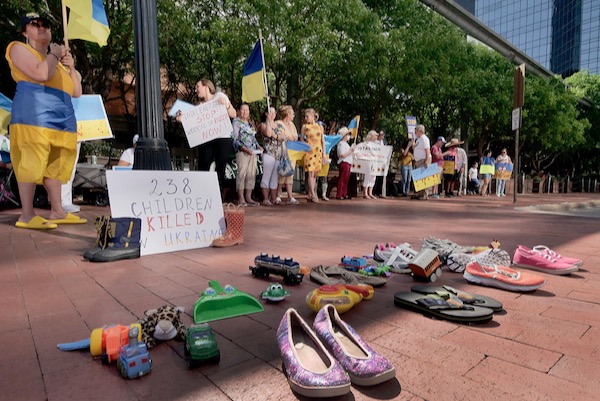 Protestors in front of Total's headquarters in Fort Worth on Thursday. Photo by J.G. Domke.

About 35 participants came out for the protest, including members of Liveable Arlington and Greater Fort Worth Sierra Club.

Liveable Arlington, a fracking watchdog group, has been a foe of Total in recent years, over the company's attempts to expand drilling in Tarrant County. The group's director Ranjana Bhandari expressed support of the protestors, ahead of yesterday’s event.

“We have always been a mother's group sounding the alarm on the health and climate impacts of fracking,” said Bhandari. “We have seen again and again Total's complete disregard for our children here, and we see that amplified in their refusal to divest from their Russian partnerships. Those investments fund this horrific war, and its horrific toll on people. And why? We have alternative energy - it is universally available, it does not make us beholden to murderous regimes.”

John MacFarlane, the chair of the Greater Fort Worth Sierra Club, also issued a statement of support:

“The Sierra Club supports a conflict free world and a ban on nuclear weapons. We also support a carbon free world and a full transition to alternative energy production,” said MacFarlane. “Transitioning to a carbon free world means actively calling for entities including state governments, banks, and industry to divest from oil and gas interests. While BP and Shell have announced their divestment from Russia, TotalEnergies has not done the same. Thus, we support the local Ukrainian community in today's protest of Total and their US affiliate, TEP Barnett, who is actively fracking and drilling for natural gas in Tarrant County which puts our community at risk.” 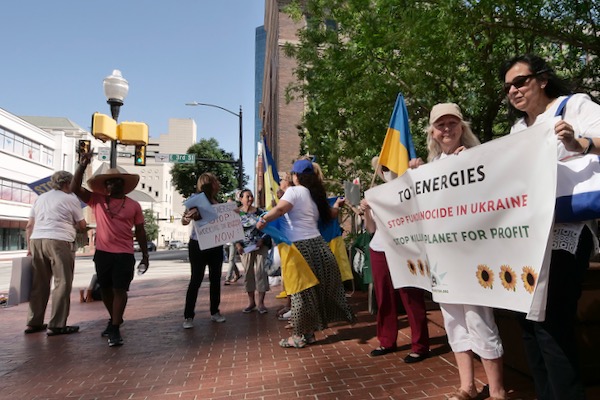 Holding a sign, Tammie Carson and Ranjana Bhandari, right, of Liveable Arlington participate in the Total protest in downtown Fort Worth. Photo by J.G. Domke.

For some of the activists, the protest was personal.

Co-organizer Carter, was raised in Russia, and came to Texas 20 years ago as a student at Austin College in Sherman. She last visited Ukraine in 2018 and has kept in weekly contact with family in Balakliya in the northeastern region near Kharkiv, during the war.

She lost a Ukrainian family member early in the conflict when a cousin’s mother-in-law went out to buy bread and died weeks later from injuries she sustained from an explosion.

Carter said the war is especially tragic having seen the country first hand.

She described Kyiv, the capitol of Ukraine, as full of ancient architecture, children's parks, walkable streets and quaint restaurants.

She had plans to spend more time traveling in Ukraine before the conflict expanded. Of the war she said:

“It’s unbelievable. Nobody ever thought this could happen.”