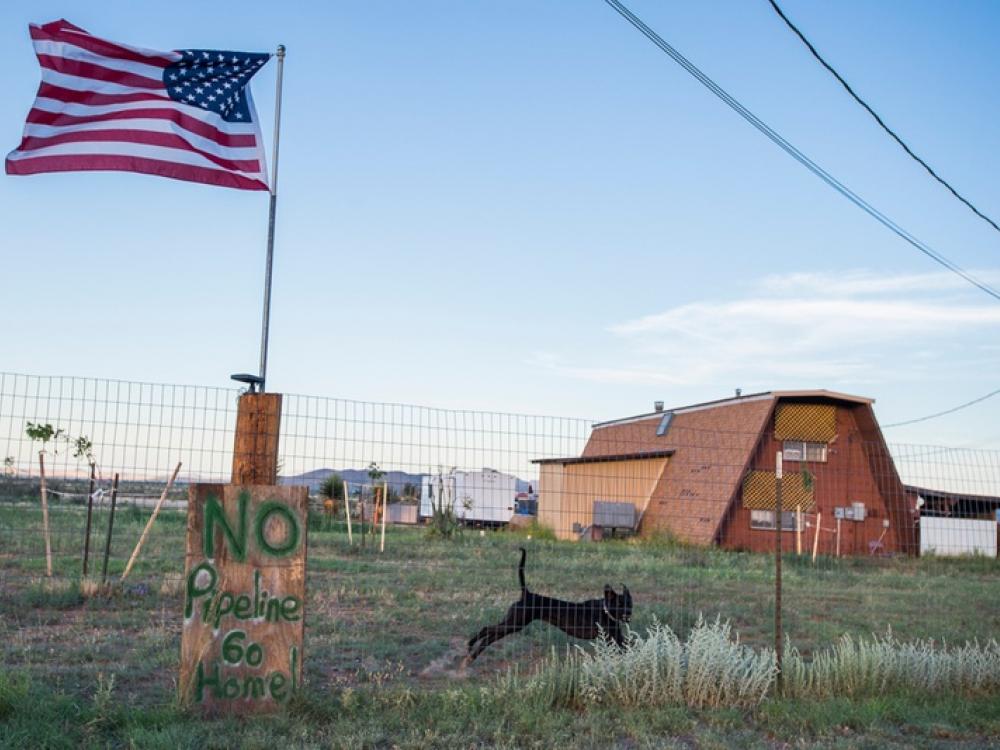 A sign opposing the Trans-Pecos pipeline hangs in a neighborhood near where the pipeline could run near Alpine. Photo by Cooper Neill/Texas Tribune.

A coalition of ranchers, environmentalists and disgruntled landowners has suffered a major setback in its battle to block a proposed pipeline that would carry natural gas beneath 143 miles of largely untouched Big Bend-area land.

Federal Energy Regulatory Commission staff offered a key endorsement of a stretch of the Trans-Pecos Pipeline, writing that it “would not constitute a major federal action significantly affecting the quality of the human environment,” in a draft environmental assessment issued Monday.

The agency, which would regulate a part of the project that crosses into Mexico, also declined to expand its environmental review to the entire project as opponents had sought.

"Unfortunately, the most negative, worst-case outcome is what we’ve received," the Big Bend Conservation Alliance, the group leading the protest, said in a statement that accused the agency of "burying its head in the sand."

The 42-inch-wide pipeline would start at the Waha storage hub near Fort Stockton and cut through Pecos, Brewster and Presidio counties before crossing beneath the Rio Grande near the town of Presidio. It could bring up to 1.4 billion cubic feet of gas each day into Mexico, where officials have recently opened up the energy sector to private companies.

Its planners include Energy Transfer Partners and Mexico’s Carso Energy — a partnership that links Dallas billionaire Kelcy Warren with Carso's Carlos Slim, one of the world’s richest men.

Vicki Granado, an Energy Transfer spokeswoman, said Monday that the company was "pleased" with the federal agency's latest assessment. Energy Transfer plans to start construction in the coming months.

Supporters say the pipeline will bring jobs to West Texas — even if almost all are temporary — and yield a few million dollars in local tax revenue. Bringing natural gas into Mexico could help wean the nation's border cities off dirtier-burning coal, wood and heating oil.

Opponents say the pipeline will at least temporarily mar the near-pristine landscape and come with safety risks such as explosions and wildfires. Others simply don’t want to lose their land to eminent domain.

The federal energy commission says it will oversee only the 1,093-foot stretch of pipeline that crosses below the Rio Grande and into Mexico. Texas has authority over the rest, which is considered an “intrastate” pipeline.

The agency declined to do so on Monday.

The commission “has no jurisdiction for the intrastate pipeline facilities; therefore the scope of the proposed action in this [environmental assessment] is the Presidio Border Crossing Project,” Monday's report said.

The project's full application is still pending at the agency, and the public has until Feb. 3 to formally comment on the draft assessment.

About 426,000 miles of pipeline — about one-sixth of the nation’s network — crisscross Texas, carrying oil, gas and other hazardous liquids. But large swaths of the Big Bend area are pipeline-free, largely because the region – with its mountains, state and national parks, and famously dark skies — is so secluded.