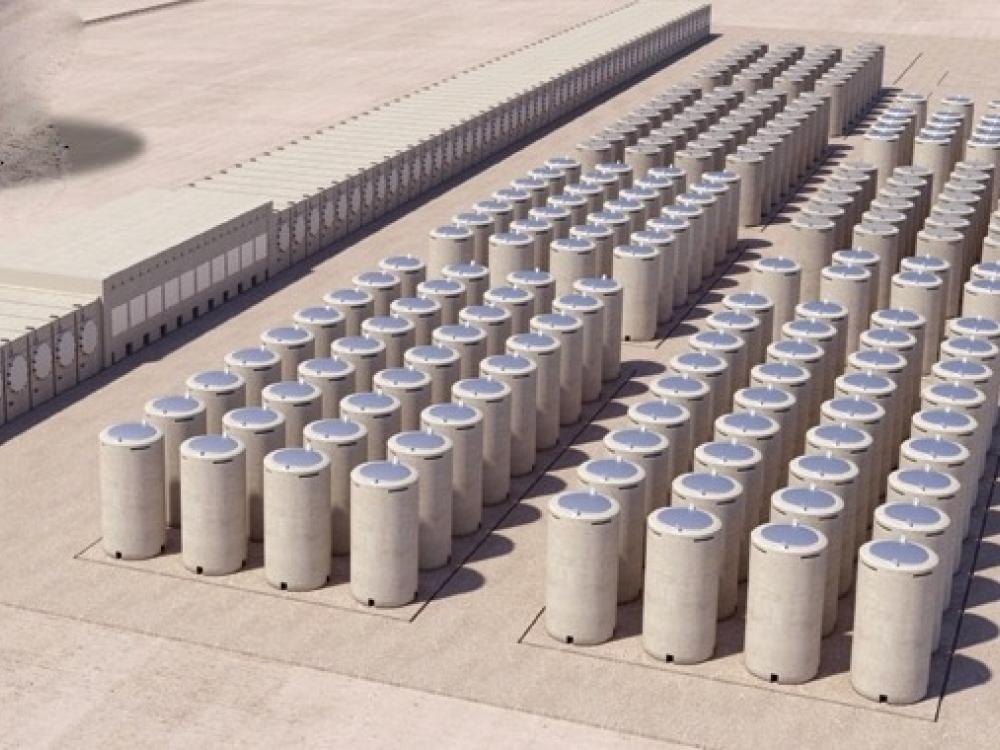 A rendering from Waste Control Specialists shows plans to store highly radioactive waste from nuclear reactors above ground at its West Texas site. Four public online hearings will be held in October. Courtesy of WCS.

With multiple national crises vying for Texans' attention, environmentalists are trying to stop plans for a high-level radioactive waste dump in West Texas.

This spring, Dallas-based Waste Control Specialists passed another hurdle in its bid to bring deadly radioactive waste from the nation’s nuclear reactors to Texas.

In May, the Nuclear Regulatory Commission released a draft study of the project’s environmental impact, giving the project a preliminary green light.

Before final approval, four online public meetings will be held, kicking off Oct. 1.

Lon Burnam, leader of Tarrant Coalition for Environmental Awareness and a member of the Lone Star Chapter of the Sierra Club, said by holding the meetings virtually during the pandemic, the NRC is contributing to this controversial project being kept under the public’s radar.

“They could very easily do an in-person meeting [in Arlington] - they’ve got the entire building. They're just not wanting to deal with the public,” he said.

Burnam said activists are still going forward with a socially distanced protest in front of the Nuclear Regulatory Commission’s Arlington office at 1600 East Lamar Boulevard on Oct. 1 at 5 p.m. as the first virtual meeting starts.

Tarrant Coalition for Environmental Awareness along with Austin-based Sustainable Energy and Economic Development Coalition, the Sierra Club, Public Citizen Texas, the League of Women Voters of Texas and the Dallas Peace and Justice Center are among the organizations that have been fighting the proposed nuke dump since the permit was submitted by Interim Storage Partners in 2016.

Today, Texas Republican Gov. Greg Abbott came out in opposition to the storage of nuclear waste in the state, according to E&E News.

Interim Storage Partners is a partnership of Waste Control Specialists and Orano USA, a subsidiary of the France-based global nuclear fuel cycle company.

“It is not even legal to consider this site in West Texas because the legal requirements are to have a planned permanent repository,” Burnam told Green Source DFW in July.

The Department of Energy is required by law to locate a permanent underground storage site for the nation’s high-level radioactive waste. Plans for a permanent disposal site at Yucca Mountain in Nevada have been shelved after years of fierce political opposition.

Burnam said one of the reasons all Texans should care about the plan to turn Andrews County into a de facto nuclear waste dump is the logistics.

The storage canisters would be transported by rail from operating, decommissioning and decommissioned commercial nuclear power plants around the country.

That means, highly deadly spent fuel rods from the nation’s nuclear reactors would likely pass through the state’s urban centers, including Dallas-Fort Worth, by rail.

Activists point to recent railroad accidents, extreme weather events and the threat of terrorism as reasons to doubt the safety of the proposed plan.

“The Nuclear Regulatory Commission is ignoring the many serious health and safety risks of hauling deadly nuclear reactor waste across the country and dumping it on Texas,” said Karen Hadden, executive director of SEED Coalition.

Once at the site, the canisters will sit above ground on a “parking lot” exposed to extremes of weather. The facility sits near the Ogallala Aquifer, the nation's largest aquifer, which stretches from Texas to South Dakota.

Activists in New Mexico are fighting a similar plan for a high-level radioactive waste facility in their state proposed by Holtec International, according to the Orange County Register.

Burnam said while many activists today consider climate change as their top concern, this old environmental foe should not be forgotten.

“While there are a lot of horrible things that are happening to the environment, there's nothing as horrible, nor as toxic, as plutonium,” said Burnam. “The main reason that the environmental community should be concerned about this is because [nuclear] waste is forever.”

Press *1 after calling in. No registration required. Audio is by phone. Slides will be shown online.