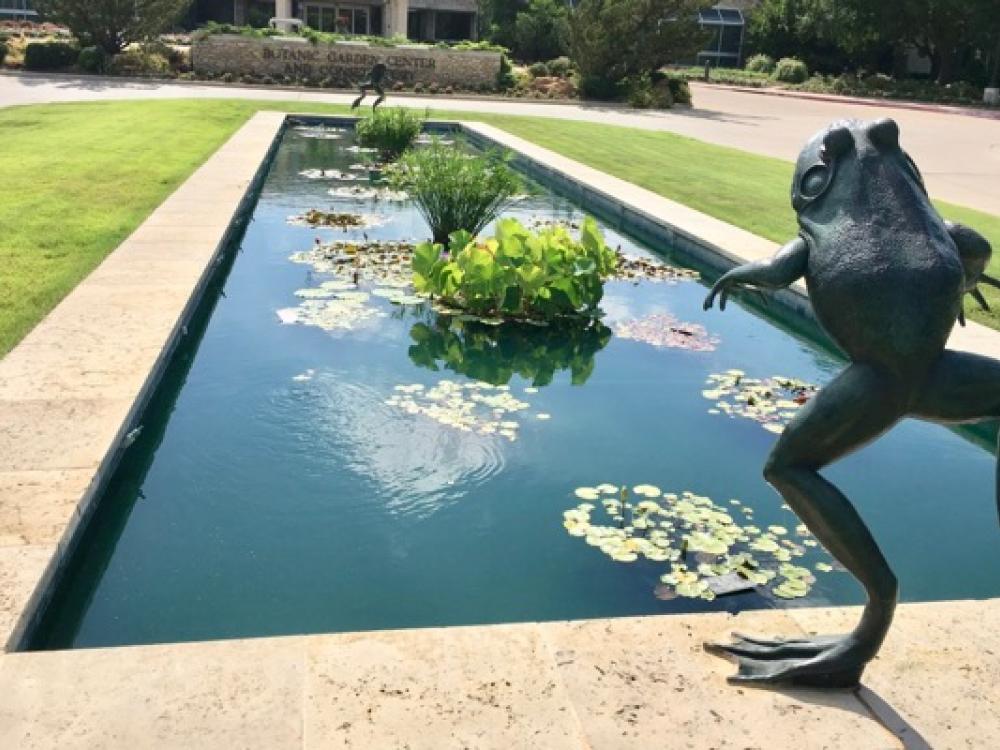 The whimsical frog fountain at the Fort Worth Botanic Garden entrance is one of the features in need of repair at the city-owned park. Photos by Julie Thibodeaux.

The frog fountains at the entrance to the Fort Worth Botanic Garden aren’t flowing, the Moon Bridge is closed, the Scent Garden dismantled and the Conservatory has been shuttered for nearly two years.

That’s why a city of Fort Worth Task Force is finalizing a plan, endorsed by the Star-Telegram, to implement an admission fee to the Garden as early as next year.

However, while park advocates agree the revenue is needed, some warn implementing an admission fee will shut out the city’s most disadvantaged.

The Tarrant Coalition for Environmental Awareness, a local environmental advocacy group, has come out strongly opposed to the admission fee, saying it will keep the underprivileged and cash-strapped residents away from the park.

“I don’t think [the Task Force] is intentionally racist or elitist,” said Lon Burnam, leader of Tarrant Coalition for Environmental Awareness. “But this fee is an unwitting example of environmental racism. Most children in Fort Worth are children of color. And because they won’t be able to afford to go to the Garden, they will be missing out on a prime learning opportunity for all things botanical.”

The 110-acre city-owned park, which opened in 1934, is the oldest botanic garden in Texas. It's always been free to the public, excluding the Japanese Garden within the park, which charges $7 admission.

A $10 entry fee to the entire park is expected to be proposed to the Fort Worth City Council by the end of the summer. The fee would generate more than $2 million annually, which would help pay for $15 million in backlogged repairs, as well as upgrades and programs in the park’s master plan.

Bob Byers, director of the Fort Worth Botanic Garden, said he shares Burnam’s concerns about keeping the park accessible to all. 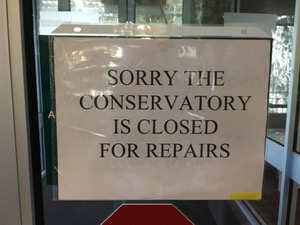 “I don’t think anybody wants [the fee]. The problem is we’ve looked at all kinds of way to fundraise and nothing we’ve been able to find is going to bring in the revenue we need. It’s not just a matter of raising $15 million dollars for repairs. That’s the symptom. The problem is chronic under funding of the garden.”

The Conservatory of the Fort Worth Botanic Garden has been closed since November 2016.

"It’s not just a matter of raising $15 million dollars for repairs. That’s the symptom. The problem is chronic under funding of the garden.”

Currently, the city pays 58 percent of the park’s $4.4 million budget, considered to be a generous allotment compared to other large municipal gardens, according to the EMD Consulting Group, the St. Louis-based firm hired by the city to study the issue. Thirty nine percent of the Botanic budget comes from earned revenue, which includes rental and Japanese Garden fees. Three percent comes from contributions.

Byers, the former director of the Garven Woodland Gardens, the botanical garden at the University of Arkansas in Hot Springs, said even without a fee, too few of the underprivileged are using the park now.

He referred to a recent survey done on Botanic Garden visitors that showed that Fort Worth residents make up only about one third of the Garden's 334,000 annual visitors. People from lower-income households made up only about 4 percent.

“We were surprised at how few [from lower income brackets] were coming. Making the garden free, doesn’t necessarily bring in that audience that you’re doing it for. You have to think of other ways to get them in.”

He added that studies done at other botanic gardens and museums show that the demographics of visitors stays the same whether institutions are free or not. According to some market research, a lack of time and a lack of interest were bigger factors in a person's decision not to visit a cultural institution than admission cost.

Meanwhile, Byers said the Task Force is looking at creative ways to ensure accessibility to the park to those who cannot afford the fee such as a free pass that could be checked out at the library, passes distributed at community centers, sponsored school trips and discounted admission for military families and those in the SNAP and WIC programs.

Under the current Task Force recommendation, children ages 6-12 would pay only $5. Ages five and under would be free. Visitors would also have the option to buy a $100 annual membership for families, $50 for individuals and $80 for couples.

Byers argues that adding another source of revenue will help the garden develop programming aimed at school kids, such as installing teaching gardens.

Suzanne Tuttle, former director for the Fort Worth Nature Center and Refuge, oversaw the implementation of a fee at the city-owned Nature Center in 2006. She said she wasn't in favor of charging admission to the Nature Center at first but saw the benefits once it was enacted. In addition to raising revenue, having a park entry gate resulted in less dumping, less vandalism and fewer people getting lost or locked in. She said although they had no way to track attendance before the fee, attendance continued to climb following enactment of the fee for the next 10 years of her tenure.

“I know the other botanic gardens I visit, pretty much all charge fees,” said Tuttle. “I actually think it’s pretty unusual that Fort Worth doesn’t.”

Tuttle added, “I know it’s a blow to people who stop by and eat their lunch [at the Botanic Garden]. I think the logical way to work that out is with a memberships. I would hope that part of the whole discussion is figuring out a way to offer free days and greatly reduced passes.”

Burnam pointed out that unlike the Fort Worth Nature Center, which is located on the outskirts of town, the Fort Worth Botanic Garden is located in the heart of the city, on the city bus route. As a result it’s one of the few nature destinations, other than city parks, accessible to those with little means.

“It’s available to inner city kids and anyone who wants a respite from life hassles.”

He proposes allowing any student with a Fort Worth ISD ID to get in free as well as any adult accompanying them.

TCEA member Charles Dreyfuss goes farther, suggesting that since two-thirds of the visitors come from outside Fort Worth, the city should make the park free to all Fort Worth residents.

However, Byers says that making the Garden free to all Fort Worth residents would wittle away at revenue from memberships, as residents are the ones most likely to purchase them. Currently the Fort Worth Botanical Society has just under 1,000 members. He pointed to the Dallas Arboretum, which has more than 40,000 members, a higher number attributed in part to having an admission fee.

“The bottom line is what do we do to make the gardens sustainable? “ said Byers. “The single most important thing is repairing the conservatory - we’re starting to lose the plant collection. There are also other safety issues to address, including replacing electrical lines and fixing the pump system. With a fee, experience shows that people will have more respect for the facility, they’re more engaged and they can have a better experience.”

Last week, the Task Force announced in addition to charging a fee, it is considering handing over operations of the Botanic Garden to a nonprofit, such as neighboring Botanical Research Institute of Texas. The two share the same parking lot and have partnered on public events and workshops.

But Burnam says that is another way the park will be removed from community oversight.

“This is a public resource, a public facility that is publicly funded. By privatizing it, you lose theoretical public control.”

Fort Worth faced a similiar scenario when the Fort Worth Zoo Association took over management of the city-owned Fort Worth Zoo in 1991. The move has been widely deemed as successful and even Burnam conceded that conditions for animals greatly improved. To date, the nonprofit has raised more than $186 million for zoo improvements and new exhibits.

Still Burnam fears that with new management, the Botanic will cease to be a park for the people on its way to becoming a "world-class" destination. He says the answer to the Botanic's money woes is funding from city bonds and the philanthropic community, which is already part of the Botanic's long-term financial plan.

“Don’t stick it to the kids and their low-income parents,” Burnam said.