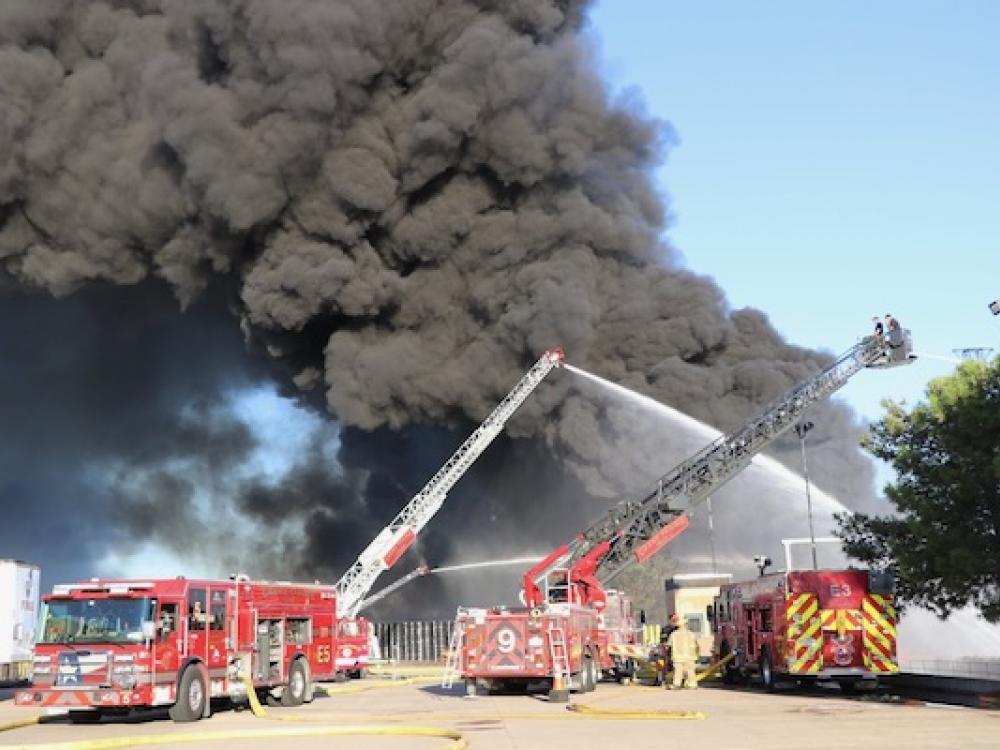 A massive industrial fire that ignited early Wednesday morning at a plastics plant in Grand Prairie, created a toxic plume threatening the health of nearby residents.

A nearby rail car also exploded.

"Plastic is hard to put out and it’s just gonna burn for, sometime ’til tomorrow," Murphy said on Wednesday.

"We're having to bring in copious amounts of firefighting foam," he said.

Residents with respiratory and other underlying health conditions were told to stay indoors and avoid the area.

At around 5 p.m. Wednesday, the Grand Prairie Fire Department posted that the fire had been contained. The fire was still smoldering on Thursday.

The company reported that firefighting foams made it into North Cottonwood Creek, according to the Environmental Protection Agency.

According to the company website, Poly-America is the world’s largest producer of polyethylene construction film. The facility manufactures polyethylene products including kitchen trash bags, drop cloths and plastic sheeting.

The Grand Prairie location is the company’s headquarters.

The fire also ignited the ire of local environmentalists.

“This is a dramatic and frightening example of why we must reduce our dependence on toxic plastics,” said Corey Troiani, the DFW-based senior strategy director with Texas Campaign for the Environment.

“The plastics industry has targeted Texas to expand dangerous facilities like this one to produce more unsustainable single-use products. Incidents like this remind us that we must transition to a cleaner economy and protect our health and environment from plastics. Our hearts go out to the residents of Grand Prairie and neighboring cities who live near this fire.”

The nonprofit Environment Texas, a clean-air and water advocacy group based in Austin, also released a statement:

“We’re concerned about what may be in the air around the Poly-America facility. Burning plastic can emit dangerous chemicals like sulfur dioxide, volatile organic compounds, particulate matter, and heavy metals, which can be carcinogenic and harm the respiratory and immune systems.

“From the wellhead in West Texas to the manufacturing facility, the plastics industry pumps out thousands of pounds of pollution into our air and water to create plastic products that we often use once and throw away. We need to start asking bigger questions about why we allow industry to pollute so much toxic pollution to create products that we don’t need in the first place.”