Chris Jackson makes wildlife photography look easy on his blog, DFW Urban Wildlife. Yet garnering photos like his requires more than skill with a camera. Knowledge of animal behavior is needed and ample amounts of patience. Plus you have to know the places where wildlife can be found.

However, your home can also be a photographic paradise as he outlines in his book In Your Backyard: Discovering Urban Wildlife. The 47-year-old software engineer from Carrollton shared some of his best tips with GreenSourceDFW. 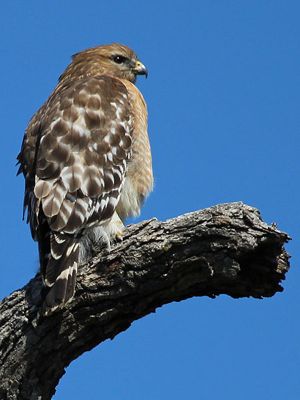 The more you know about the animal you want to photograph, the better chance for success. Guidebooks abound. Audubon Society was the standard for birds until eclipsed by David Sibley. Peterson has long published a guide for just about every species, often by region or ecosystem. But now a myriad of specialty field guides exist.

You can also search online to learn animal calls and sounds.

Left, red-shouldered hawk at River Legacy in Arlington. All photos by Chris Jackson.

Jackson stressed that there’s no substitute for learning in the field. The idea is to know enough that you can anticipate where an animal might be at a particular time of day. Set aside time each week for observing wildlife. Get to know a few species at a time. If you’ve got birds in your yard, start there. Like to amble the neighborhood at night? Your subjects include owls, raccoons and opossums. Live near a body of water? Turtles are slow and easy to shoot.

Make sure you check the weather forecast before leaving for the field. Pack sun block, bug repellent and tissues, plus water and snacks, since you’ll be out a few hours. A cloth or something to sit on can be very handy for long sessions. 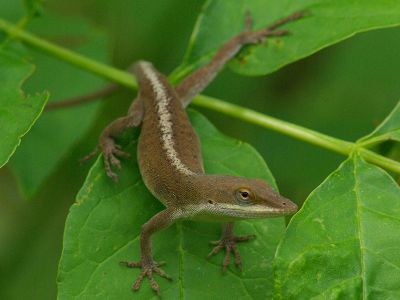 The biggest challenge for future wildlife photographers, said Jackson, is learning to be silent and still. Only by receding into the landscape will animals feel comfortable enough to come close.

A green anole in the McCommas Bluff area of the Great Trinity Forest.

Observe everything: the slant of the sunlight, the way breezes blow, how plants fit into the landscape. Details you never saw before will emerge. If you fiddle with your smart phone until wildlife shows up, you’ll see none of them.

The key is to scan slowly and look closely. Animals are often hidden in the underbrush or tall grasses. Watch for movement. If a predator is nearby, prey animals will leave quickly. Expect to see wildlife on the edges of wooded areas and along creeks and fencelines. Watering holes are another good place to monitor.

But Jackson cautioned: “Most animals are finely attuned to detecting stalking behavior. You may get closer with stalking, but if the animal ever catches you doing it, they’re going to leave you in their dust. It is also important to shift your focus to your subject gradually. When animals realize they have suddenly attracted your attention, they usually split!”

"Getting to see wildlife engaging in candid behavior is a real privilege,” said Jackson. “Patience is the price of admittance.” 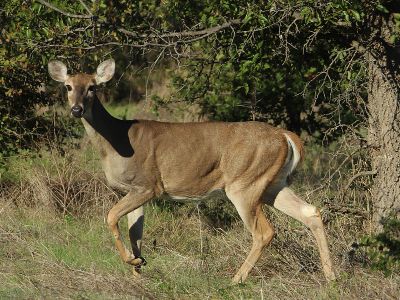 Just as animals merge with the landscape to remain unseen, so should you. Make yourself less visible by wearing clothes that blend in with nature. Find a backdrop to blend into like shrubbery or the trunk of a large tree.

“I often hear animals before I see them,” said Jackson. “It is fun to see what finally emerges from the brush! Combine staying quiet with moving slowly and the wildlife you are observing may never know you are there.”

An urban white-tailed deer. Below, coyotes howl at a siren in Garland. 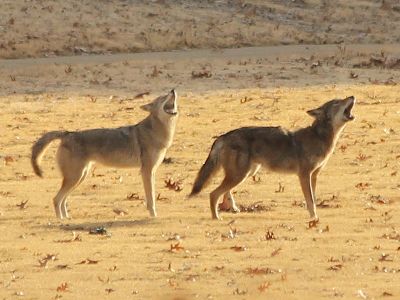 ”Bright and early in the morning is my favorite time to work,” said Jackson. “I like to be on site before dawn if I can. Animals are most active at this time of day and in the summer the temperature is still relatively cool. I also like the idea of being able to extend my time outdoors if I decide to. In the evening, nightfall can put an end to a photography session before you are ready!”

“The lighting at sunrise and sunset is the most favorable,” added Jackson.

The long slanting rays at that time impart a golden hue to the landscape. Lighting from the side casts softer shadows than light from above. Especially in sunny weather, mid-day brightness can overexpose the shot and form dark shadows. A light cloud cover can diffuse sunlight, making a soft and uniform light. 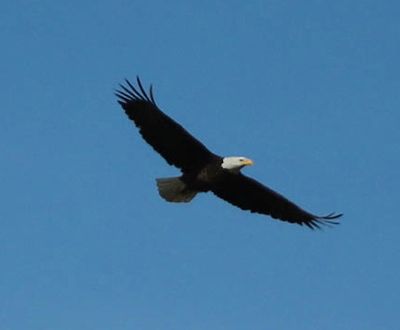 5. Get the Right Equipment

“With wildlife photography you will find yourself frequently working at the very limits of what your equipment is capable of,” Jackson noted. “This is especially true if you are on a budget. Film is expensive and unwieldy. And you have to wait to get your prints before you can see how your pictures turned out. If what you do is intended for the internet, and not print, digital is just perfect.”

“I like to stay light on my feet which means I usually dispense with the tripod and take most of my photographs with the camera handheld,” Jackson continued. “I can usually manage pretty well with this setup. The 28-300mm lens also gives me all of the range I need so that I don’t have to be burdened with lens changes in the field. The only downside to this combination is that it is heavy—right around six pounds or so.”

Above, bald eagle at John Bunker Sands Wetland Center. Below, a close encounter with a copperhead. 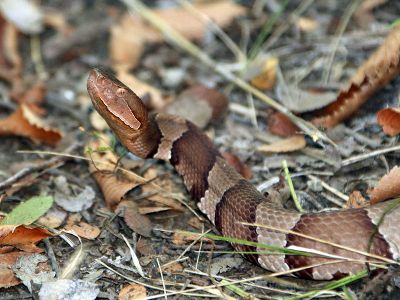 But if you’re not able to get deep into the field like Jackson, or are viewing wildlife from your car, telephoto lenses are a must. On the downside, telephoto lenses are bulky and heavy. The longer lenses cause even the slightest motion to blur the photo, so a tripod or unipod is essential. In a pinch, you can rest the camera on a surface for support. An alternative is to use a teleconverter that magnifies the capability of lesser lenses, but the image resolution is degraded and more light is needed for a clear photo.

“Recently, I have begun carrying a Canon SX50 in certain circumstances,” said Jackson. “This is a lightweight point-and-shoot camera that has some really amazing capabilities. Most notable is its legitimate 50x super-telephoto lens. I’ll usually bring this camera with me when I am exploring a new area and don’t want to be burdened with heavy gear. The SX50 is not a replacement for a Digital SLR, but once you understand the camera’s limitations it is possible to get some really great, internet ready pictures.”

Below, whooping cranes at Lake Lewisville. 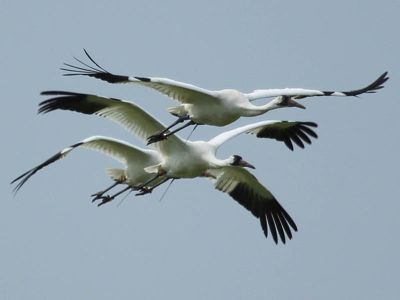 Jackson goes the distance to get great wildlife shots. He sets out battery-powered trail cameras with motion-detectors that trigger the camera when wildlife comes along. If the photos look promising, he’ll return with his full camera gear. He gives examples of how the process works in this blog post.

But it doesn’t always go according to plan. Raccoons vandalized one of Jackson’s trail cameras. Blog post on the rascal raccoons here. 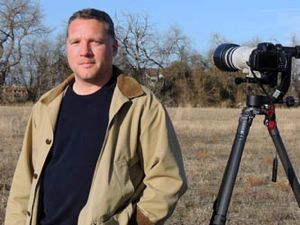 “There are many parks in the Dallas/Fort Worth area, so I am probably leaving some good ones off of this list,” cautioned Jackson. “The following are the parks I find myself returning to over and over again. Most are located near my house in Carrollton and each is loaded with wildlife.”

Lewisville Lake Environmental Learning Area: “This great nature area is located just south of the Lewisville Lake dam. It has a lot to offer — hiking trails, kayaking, camping and fishing. They do a lot of work with local schools and have some super programs for the kids. I like LLELA because of its expansive wilderness areas and the abundance of wildlife!”

Old Alton Bridge: “I first started visiting this area when I was still in high school. At first it was the ghost stories about Goatman’s Bridge that drew my interest. Later it was the wildlife. A lot has changed out there over the intervening years. The location is not nearly as remote as it once was. Bedroom communities have grown up all around, but that is not necessarily a bad thing for wildlife.The encroaching suburbs put a damper on a lot of off-season hunting activity (read: poaching) and that benefited the wildlife enormously. There are more animals living in the woods along Hickory Creek now than ever before!”

White Rock Lake: “I consider this park the crown jewel of Dallas. It’s a great place for a relaxing walk with the family. Lots of animals call this lake home and most of the wildlife is relatively accustomed to human activity. That means the animals are often very tolerant and amenable to observation. Of note this winter is the number of rare and unusual waterfowl observed at White Rock Lake.”

Village Creek Drying Beds and River Legacy Park: “This is one of the most productive places to take pictures I have yet found. The Village Creek Drying Beds are part of an old wastewater treatment facility located just south of the Trinity River in Arlington and Fort Worth. The drying beds still retain various amounts of water and this creates an excellent wetland environment that attracts a great variety of waterfowl. Many other kinds of wildlife call this place home as well. River Legacy Park is adjacent to VCDB and offers some really nice trails through the wooded areas near the river.”

Carrollton Greenbelt Park System: “This is a great little community park. It has a nice paved trail (the Blue Trail) that covers roughly 5 miles from Hebron Parkway down to Old Denton Road. Along the way it passes by Woodlake Pond, which almost always hosts a nice variety of waterfowl. Later the trail meanders into Nob Hill Park, which I believe is a fantastic example of how great a park can be. The east side of Nob Hill Park is groomed for human use and enjoyment. The side opposite of Furneaux Creek has been left mostly wild and is an excellent place for animals to live. I have had many productive photography sessions in this park, in spite of it being more tightly encircled by suburbia than the other places I have mentioned on this list.”

Contribute your wildlife observations and photos to the iNaturalist section of Jackon’s DFW Urban Wildlife website. Hundreds of species have been documented by citizen naturalists already.

Next month in North Texas Wild: Get the scoop on an old-growth forest northeast of Dallas.

Amy Martin, a journalist and writer for more than 30 years, is currently North Texas Wild columnist for GreenSource DFW and author of "Itchy Business: How to Treat the Poison Ivy and Poison Oak Rash, Prevent Exposure and Eradicate the Plant." She was contributing editor for the national magazine Garbage (recycling and features), and has written for TheaterJones (comedy and cirque), Senior Voice (The Aging Hippie column), Dallas Morning News (recycling), Dallas Times Herald (performing arts), and Dallas Observer (music and comedy). For a dozen years, Martin also operated a popular alternative news service called Moonlady News, earning her the nickname Moonlady. A leader in Earth-centered and unaffiliated spirituality, Martin was director of Earth Rhythms and creator of the acclaimed Winter SolstiCelebrations, and Texas Faith panelist at the Dallas Morning News. She may be reached through www.Moonlady.com.