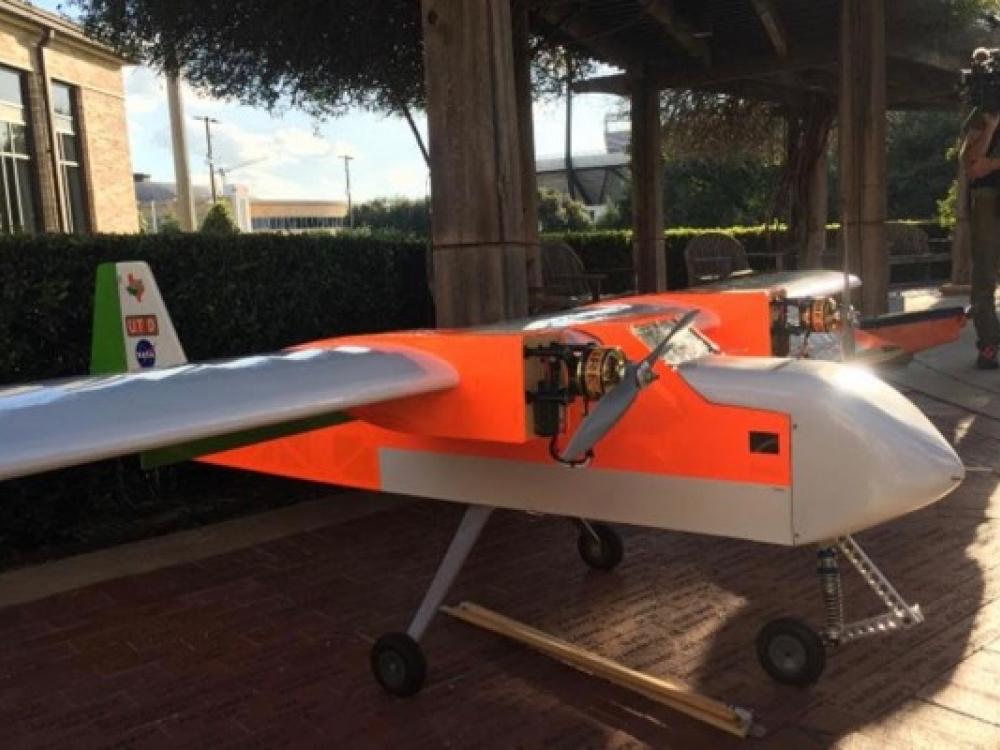 Downwinders at Risk is working with a researcher from the University of Texas - Dallas and others to monitor air quality in North Texas hot spots using drones as well as stationary monitors. Photo courtesy of Downwinders at Risk. 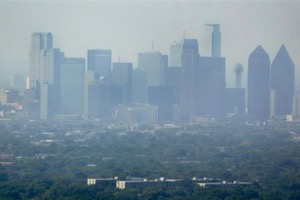 What you don’t know about local air quality could be killing you; or at least worsening your asthma and eroding your cardio-pulmonary health.

Even if you’re a healthy adult or child, exercising or working outdoors in areas with high levels of ozone pollution, aka smog, can make you sick and more susceptible to developing a respiratory infection. High ozone levels, such as those recorded every summer in the Dallas-Fort Worth area can give people what the American Lung Association describes as a “bad sunburn” inside the lungs.

So if breathing polluted air is a risk you’d rather avoid, then you’ll be glad to hear that North Texas researchers and clean air advocates are collaborating to better monitor the air in the Dallas-Fort Worth metro area. By installing monitors with air sensors in dozens of locations, they hope to pinpoint hot spots with high or spiking levels of ozone or particulate pollution. Those two types of air pollution are the most prevalent and can be the most damaging to human health.

By installing monitors with air sensors in dozens of locations, they hope to pinpoint hot spots with high or spiking levels of ozone or particulate pollution.

Ground-level ozone pollution, created when the exhaust from cars and trucks and emissions from power plants and other industrial sources react with sunlight, blights many urban areas. But it’s so bad in the 10-county metropolitan area that DFW ranks #11 on the American Lung Association’s “Most Polluted Cities.” As the EPA defines it, DFW is a “non-attainment area” for its long-term failure to meet the agency’s guidelines for staying within safe ozone levels. 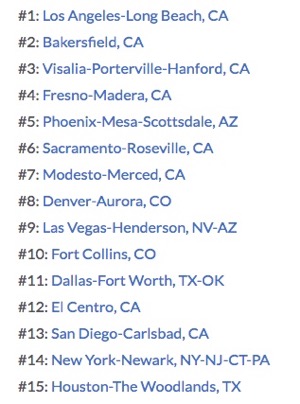 Most Polluted Cities in the U.S. by ozone. Courtesy of the American Lung Assocation.

Downwinders at Risk, which has fought air pollution for decades with targeted successes (against cement plants and urban drilling) in North Texas, wants to expose and better define the area’s dirty air problem in the hope that more revealing data will push public officials to act, says Jim Schermbeck, director of the local clean air advocacy.

The group is a key player in the new collaboration, creating a clean air research/policy/advocacy network.

The plan evolved after Downwinders won a $3,000 grant at the “Earth Tank” competition at Earth Day Texas in April. Downwinders had proposed to buy a drone to check Metroplex air quality in less-monitored areas. But after consulting with Dr. David Lary, a University of Texas-Dallas professor of atmospherics, the group broadened its plan.

Downwinders decided to maximize its grant by partnering with Lary’s program, which will be setting up 10 air quality monitors across DFW over the next year. Downwinders will buy one of Dr. Lary’s monitors (#11), which cost about $2,500 each, and use its remaining grant money to hire a drone operator to run air quality checks using one of several drones already available to Dr. Lary.

Dr. Lary, meanwhile, will be using his own Earth Day Texas grant as well as other funding, to buy and set up the monitors at yet undetermined sites. Later, he hopes to win more grant money to install hundreds more monitors in North Texas and in Chattanooga for a study there.

These monitors will check ozone and particulate air pollution and could help communities in various ways, said Lary, whose degrees and teaching spans the field of photochemical atmospheric (smog) modeling, engineering and public health.

Readings near schools or parks could help keep children off the playground when air pollution is dangerously high. It could help cities map their smoggiest areas, informing development plans, for example.

“It will give us an inventory of pollution problems that are fixable,” Schermbeck said, especially if the network spans the Metroplex.

And early signs are that it will. This initial partnership between Downwinders and UTD  has already morphed into an even bigger network that loops in experts from University of North Texas at Denton, Texas Christian University, UT-Arlington and the UT Health Science Center.

“The idea is to put together a network of academic expertise and municipal governments to form our own 'Air Quality Network,'” Schermbeck said.

The cities factor in as places that have both a need for the air quality information and the rooftops and signal poles that can host the monitors, when they’re ready. Together, the advocates, academics and city leaders may be able to find ways to mitigate air pollution locally instead of just depending on the federal government, he said, adding that “cities realize that if they’re going to get anything done they’ll have to do it themselves.”

Together, the advocates, academics and city leaders may be able to find ways to mitigate air pollution locally instead of just depending on the federal government, Schermbeck said, adding that “cities realize that if they’re going to get anything done they’ll have to do it themselves.”

EPA currently has only about 20 air quality monitors for the entire 10-county DFW region of 7 million people, far too few to provide a 21st Century picture of the local air, Schermbeck said. Further, many of the EPA’s monitors are on the outer edges of the area, in Johnson and Ellis counties, for example, where they might capture industrial pollution, but not the smog created in denser urban airs affected by industrial and vehicle emissions, he said.

The EPA system employs expensive monitors with the capability to measure many types of pollution. It’s valuable and powerful, but too meta, Schermbeck said.

“It doesn’t’ give you a very discrete picture of what’s happening on the ground.”

Dr, Lary said his monitors, which are far simpler and more affordable, can fill in the gaps. He has no quibble with the EPA, but sees a way to augment air data with a closer, focused picture of air pollution near schools, parks and congested intersections.

“We really want to have sensors between half and five kilometers apart, much closer together than what we currently have,” he said. “Then we can characterize the distribution of pollution at the neighborhood scale.”

“Right now, if you were to take the nearest EPA sensor and look at the data from it, that might not be a fair representation of the air you’re breathing. If it’s 10 miles away that might not be,“ he said.

“Right now, if you were to take the nearest EPA sensor and look at the data from it, that might not be a fair representation of the air you’re breathing. If it’s 10 miles away that might not be,“ Lary said.

Lary’s research has shown that local air pollution can vary across an area less than a mile apart within a community, as well as fluctuating through time. The study that confirmed this mapped near continuous air quality readings that scanned a portion of Richardson and Dallas for three months. This uncovered hot spots that appeared in one location on a certain day, but not on others.

So if you’re in Denton County, say, and you checked the EPA monitor for that day (readings are available to the public online), the reading might show that the air quality is good, but near you, that might not be the case.

The supplier for the neighborhood monitoring units is a group called Array of Things, based in Chicago. They’ll be providing the monitoring units for DFW as well as an additional 10 monitors Dr. Lary plans to install at UTD in Richardson.

Array of Things is planning a vast survey of its own in Chicago, setting up monitors across The Windy City to check air quality and many other environmental factors from humidity to ground vibrations.

Downwinders plans to employ its drone flights to check air quality – using one of the new monitors – sometime next spring after the “ozone season” begins, Schermbeck said.

Those plans will target undetermined industrial areas and specifically, locales in Wise County long believed to have some of the area’s worst air because of gas drilling emissions as well as being in the drift path of smog moving north from the Dallas and Fort Worth.

“Everybody knows that Wise County is the worst in DFW, the modelling tells you that…and yet there’s no monitor there,” Schermbeck said. “The state has known this for the longest time.” (That Wise County needs, but lacks, an air monitor.)

If it turned out to be true that Wise County experiences high levels of ozone pollution, it could greatly affect the DFW region’s official air quality status. 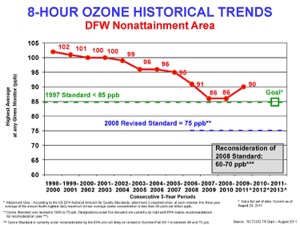 Schermbeck explained: The EPA has labeled DFW as a “non-attainment” region for ozone pollution based on the monitors with the worst readings, in other words, those that exceed the safe threshold by the most. Often, those bad readings have come from the EPA monitor at the Denton Regional Airport, because that area suffers from an accumulation of smog drifting north from traffic-congested Dallas.

DFW exceeds the EPA’s safe threshold for eight-hour averaged ozone levels of .070 ppm by frequently registering in the .080 or above range. (It also failed to meet the previous EPA threshold set in 2008 of .075 ppm.)

The 10-county region is classed as having a “moderate” ozone problem along with many other cities in the U.S. (You can see how the area has failed to meet the EPA standard since the 1990s on this chart by the North Central Texas Council of Governments.)

This has meaning beyond the obvious issue of aggravating respiratory health, because the federal government withholds highway funds from areas that cannot comply with the EPA thresholds.

In other words, Wise County could drag down the whole 10-county linked region.

But on the bright side, the new air quality network will be well-positioned to come up with solutions – helping bolster efforts by agencies already working on this problem, such as the North Central Texas Council of Governments.

“To me, the really exciting part is the collaboration between local government, colleges and citizen groups,” Schermbeck said. “We can have a service of our own, where before we were dependent on the EPA.”

+ For more on how oil and gas pollution, or smog, affects respiratory health and raises asthma attacks see the report, Gasping for Breath.

Journalist Barbara Kessler of Flower Mound has specialized in environmental issues and children’s welfare, working in TV and at newspapers, such as The Dallas Morning News. She operated a syndicated green living website that provided stories to dozens of TV stations. She produces EcoBayou.com, an online resource that advocates for slowing climate change, accelerating green energy and saving wildlife. Contact her at Barbara@EcoBayou.com.