Authors from Dallas County Community College have published a two-volume textbook titled "Feasted Landscapes: Sustainability in American Topics," chronicling the history of unsustainability in the U.S.

Students at Dallas County Community College District will be looking at American History through the lens of sustainability, thanks to a supplemental textbook created by DCCCD staff and faculty.

According to De La Cruz, the book grew out a lecture series, funded by a sustainability grant from the city of Irving. The Irving Youth in Environmental Sustainability project included presentations at North Lake College, University of Dallas and Irving's four high schools. Romero, who has specialized in the study of marginalized populations, sat in on the lectures with her students and became a fan of the program.

“I said ‘This could so easily be incorporated into classes,” said Romero.

She contacted De La Cruz about developing a new series focused on sustainability issues as they relate to American history. The lectures were rebranded as the iYES Lecture Series and delivered to History 1301 and 1302 students, giving them a new perspective through a different set of lens.

After two years, Romero suggested they put together a reader that could be used as supplemental text in multiple disciplines.

De La Cruz agreed to spearhead the project a year after being hired as sustainability coordinator for Mountain View College. 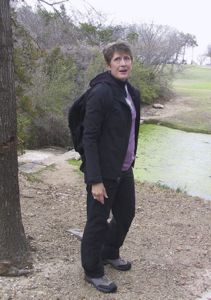 De La Cruz had the chops for sustainability education, having operated an environmental consulting firm for many years.

She also had a love of history.

“David McCullough is one of my most favorite authors,” she said.

In preparation for her lectures, she poured through books on American history and ecology.

She also began to see a pattern of destruction when any one of the three tenets of sustainability – environmental resilience, economic responsibility, social justice, what she calls the three-legged stool – were ignored.

“The most surprising thing is you can look at American History through the framework of the three-legged stool so easily once you know what you were looking for.”

For this collaboration, the four authors each found period writings, documents and legislation that shed light on the country’s unsustainable practices. They  wrote questions on each topic for discussion.

Volume One of Feasted Landscapes begins in pre-Colonial times chronicling how the early European settlers “feasted” on America’s natural resources, exploiting the land, animals and its original inhabitants the Native Americans, along with African American slaves. Volume Two shows how unsustainability in the post-Industrial Age brought pollution, synthetic fertilizers and a throw-away culture.

Despite this gloomy portrait, there are some bright spots in the country’s history with regard to the environment. The story is dotted with conservation-minded individuals, including nature writer Henry David Thoreau, Sierra Club founder John Muir and Rachel Carson, the author of Silent Spring, often credited with launching the modern environmental movement.

“We don't focus on this in our history books because it’s not in there,” she said.

De La Cruz said the reader could be used in a variety of classes, including social sciences, psychology, government, literature and sociology. 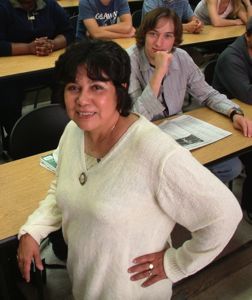 The text is currently available in both print and electronic editions on the Kendall Hunt website. Cruz and her colleagues plan to market it to faculty across the country.

De La Cruz said they hope they’re better informing students so they can take on environmental problems that are facing them, including climate change.

“You can't tackle [the problems] all at once,” she said. “But people need to understand that what harms the environment will harm us.”