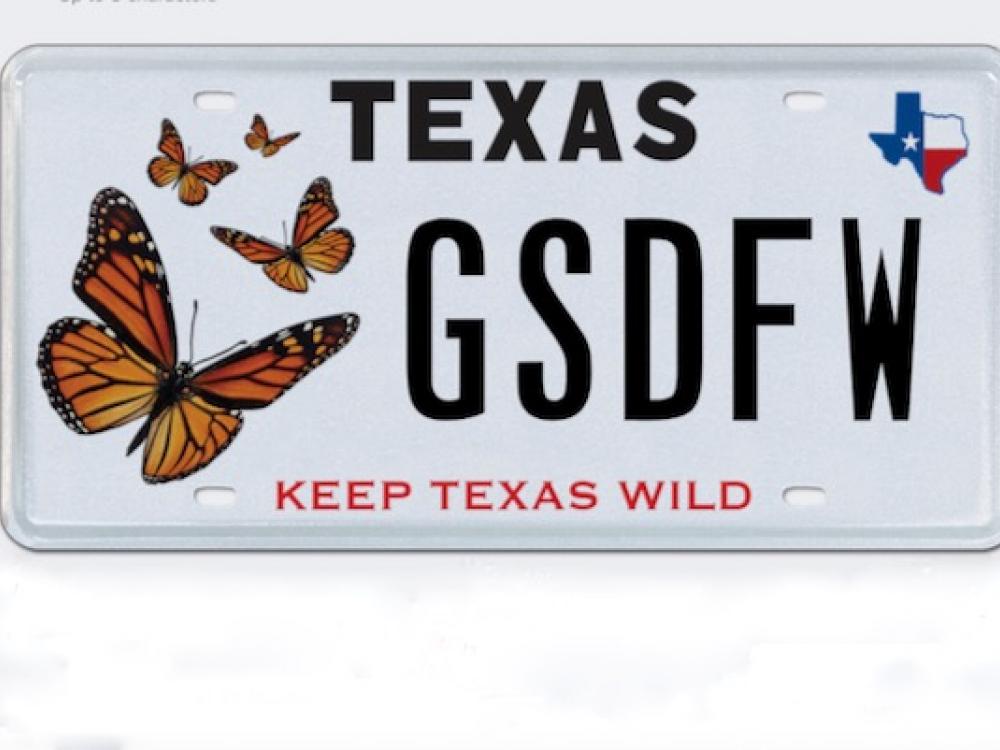 The Monarch Plate, launched in June, is the 10th offering of the Texas Conservation Plate program.​ Image courtesy of Texas Department of Motor Vehicles modified by GSDFW.

Texans can now show their support for monarchs as they flit about town or fly down the road with a new specialty license plate.

Revenue from the sales will help conserve monarch butterflies and other native Texas, non-game, at-risk species, according to TPWD.

Texas is a critical habitat for monarchs. Every spring and fall, thousands funnel through the Lone Star State to and from their overwintering site in Mexico and their summer home in the northern U.S. and Canada.

“This great migratory story is in jeopardy with the overwintering population experiencing steep declines in the last decade,” said John Davis, TPWD’s Wildlife Diversity Program Director. “By adding the monarch to our family of plates, we hope to increase support for this beautiful migration event and through our conservation efforts, brighten the future for this, and many other species.” 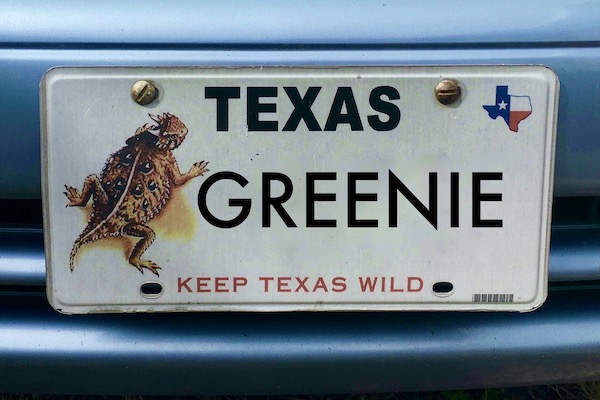 The Horned Frog plate is one of the top sellers since the Texas Conservation Plate program began in 2000. Photo by Julie Thibodeaux.

The Texas Conservation Plate program began in 2000 and has raised more than $10 million for conservation, research and educational projects.

Today, there are 10 plates to choose from, featuring a variety of native wildlife from hummingbirds to rattlesnakes as well as two depicting outdoor scenes — a river and a camping scene.

The design you choose determines where the donation will go. Over two decades, the program has raised $5.4 million for wildlife conservation, $2.5 million for state parks, $1.4 for big game management and $900,000 for fisheries.

The money has helped fund a variety of projects including purchasing electric vehicles for park staff, funding a study of Houston toad habitat, reintroducing prairie dogs in Marfa as well as installing interpretative signage at a number of state parks. Read more about how money has been spent here.

In addition to the Conservation Plates, there are nine specialty plates, which go to specific nonprofit causes such as the ocelot program at Laguna Atascosa National Wildlife Refuge. There is also a plate that supports the Texas Parks and Wildlife Foundation, the official nonprofit partner of TPWD.

Currently, there are 21,866 conservation plates on Texas roads as of Jan. 1. 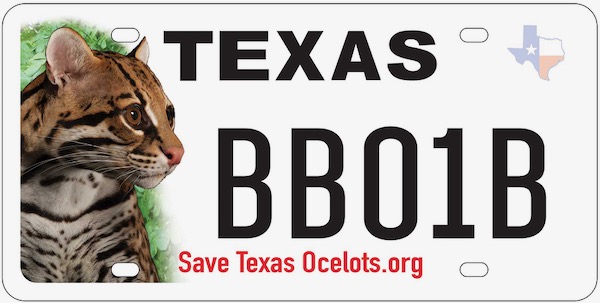 Proceeds from the Ocelot plate go to the ocelot program at Laguna Atascosa National Wildlife Refuge. Image courtesy of TPWD.

According to Stephanie Garcia, a Texas Parks and Wildlife Department spokesperson, the two oldest plates, Horned Lizard and Bluebonnet are the best sellers in terms of having generated the most revenue since the program began.

“Currently, the Camping, Hummingbird and Texas Rivers plates are selling very well,” said Garcia in an email. “The new Monarch plate, launched June 21, is generating a lot of excitement right out of the gate.”

The plates cost an additional $30 over your annual vehicle registration fee. $22 of the cost goes directly to conservation efforts.

You can order them online any time during the year, not just when your vehicle renews. The cost will be prorated. Your plates will be mailed to your local county tax office for pickup in two to three weeks. Or you can order in person at your local county tax office and they will be mailed to you. You can also personalize the plates with letters, numbers and symbols of your choice.