Nature Made Me: Three prairie guys reflect on their roots 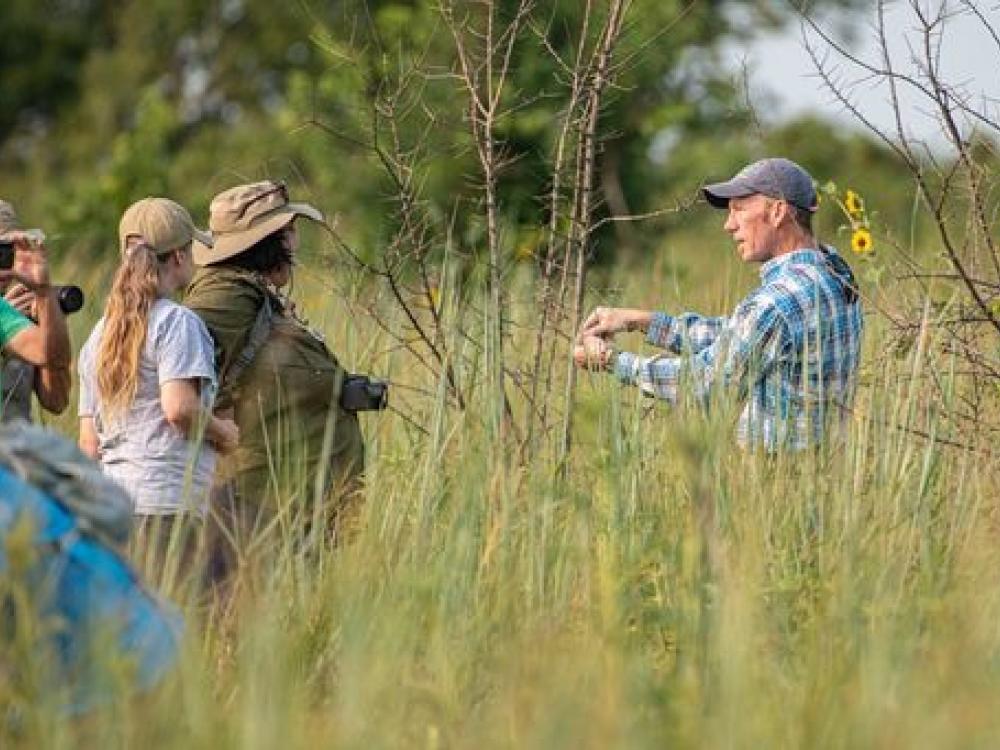 As I compiled my upcoming book Wild DFW by Timber Press over the last year, I interviewed dozens of North Texans whose experiences as nature-loving kids led to their current eco-occupations. The result is a series of profiles I call Nature Made Me.

I kick the serie off here with some nature-loving guys who do so much for promoting prairie conservation in North Texas — Brandon Belcher, North Texas preserves manager for The Nature Conservancy; Richard Freiheit, Lake Lewisville Environmental Learning Area restoration manager; and Matt White, author of Prairie Time: A Blackland Portrait.

Brandon Belcher was a creek kid.

“Growing up in Dallas, I never wanted anything more than to play outside,” said Belcher, now the North Texas preserves manager for The Nature Conservancy. “From chasing frogs and snakes in grade school to exploring the White Rock Creek floodplain bottoms as I grew older, I was happiest outdoors — and I still am today."

Belcher said he didn't plan on being a prairie professional. After high school, he made his way into the telecommunications business, which he found successful, though not satisfying.

But the love of nature never left him. Belcher embarked on college intending to study environmental sciences and then switched to wildlife and conservation sciences. 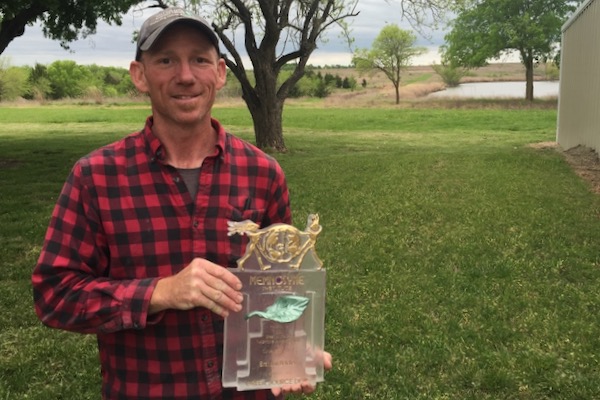 “Ultimately, I realized that ecology is what I've been studying my whole life, the science of connections,” he said. “Like John Muir's quote, ‘When we try to pick out anything by itself, we find it hitched to everything else in the universe.’”

Belcher began volunteering at Clymer Meadow, a Blackland Prairie preserve managed by The Nature Conservancy near his East Texas home. The effort tapped into his halcyon days as a creek kid when “Curiosity arose about everything, the why and how and when, questions I still seek to answer daily.”

An enthusiastic learner at Clymer, Belcher pursued the preserves manager position when it came open. Ultimately he earned a master's degree in plant ecology from the Texas A&M–Commerce and is in demand as an instructor.

Despite his deep prairie affiliation, said Belcher, water also has always had a special attraction for him.

"I still find myself going out of my way to take a peek at some body of water, looking for critters around the edges," he said. "I look for a bit of surprising nature everywhere, and I am never disappointed.” 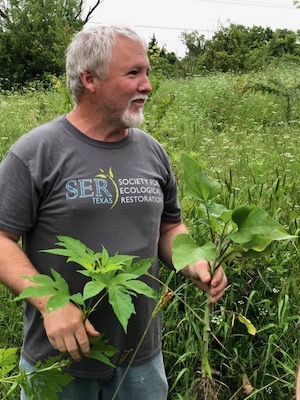 Like agricultural alchemists, Richard Freiheit and his volunteers at Lewisville Lake Environmental Learning Area work their magic on pastures, developing a biological richness known as Blackland Prairie. Thanks to their toil, rough and raw land is transformed into undulating waves of prairie grasses and wildflowers. It's hard, back-breaking work that entails clearing encroaching brush with chainsaws and burn piles; collecting and distributing seeds; and planting thousands of plants at a time.

All because Richard, now the Lewisville Lake Environmental Learning Area restoration manager, took a detour through a field going home from school in his youth. He loved the bluebonnets that coated it every spring and especially "the pit with a mountain of dirt beside it,” he said.

“When it rained, the pit would fill up with murky water, and you could wade through it up to your neck."

Then one day, it was all leveled.

"I was beside myself with disgust that those people plowed that field in winter, when the bluebonnets were dormant, so they could claim they didn't know." 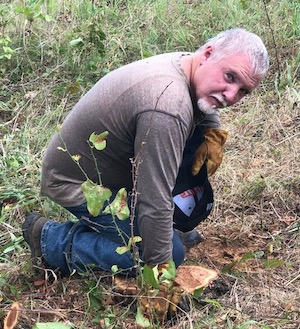 Richard Freiheit digging in at LLELA. Photo by Tim Trosper.

His work at LLELA has been a constructive counterpoint to that kind of environmental loss.

"In the 16 years I've been the restoration manager at LLELA, I've been asked many times what kind of person I am, you know, a bird guy or a plant guy. What really does it for me is fixing things, those things that others didn't know enough or didn't care enough to take care of. My job allows me to look out across neglected fields and imagine what they could be, what they should be, and then do something about it."

"Those strong emotions I had as a child about the land have stuck with me. Ask anyone who has been on a tour with me at LLELA. I have realized that I can pass that passion on to others just by showing it. I can't do it alone and I don't want to. But what I can do is share my passion for the land and fixing it with any that care to hear.”

"Never doubt that a small group of thoughtful, committed citizens can change the world; indeed, it's the only thing that ever has." – Margaret Mead 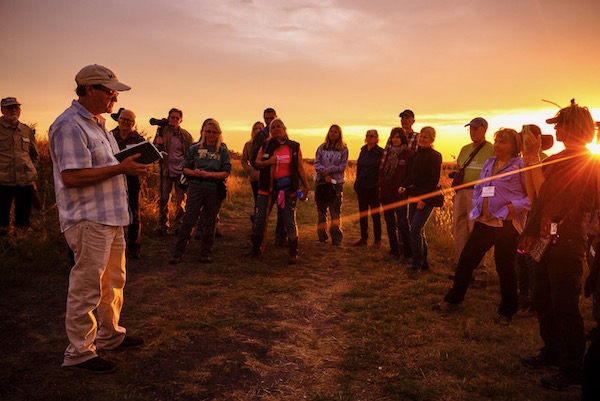 “I grew up in the country — in a land of cattle pastures that had been plowed. I always wondered what the land looked like before.” 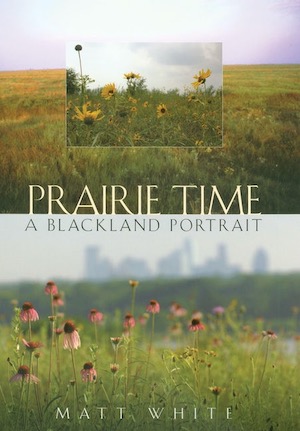 A nature kid, his father introduced him to the study of trees while his mother turned him on to birds.

But it was a science teacher who ignited White's fascination with plants:

“He had us learn the Latin names of 30 local wildflowers and press them on index cards. That hooked me on botany. Then in my late twenties, I visited Paul Mathews Prairie in Hunt County and began to experience these unique wildflowers I had never seen growing."

“I thought that this must be what early Texas looked like.”

But pressing matters got in the way, like marriage, raising four daughters, and becoming an American history teacher at Paris Junior College.

“Years later, I began to ask the questions that led to Prairie Time and my obsession with prairies,” said White. "I was in my bedroom one evening thinking about how much more we care if something bad happens to someone we know. I realized few really knew the Blackland Prairie — why would people care about preserving them? So I started writing.”

White is a prairie activist, educating landowners about preserving their native grasslands. Working with Texas Parks and Wildlife, he is on a quest to document the remaining examples of Blackland Prairies home to the rare Silveus dropseed native grass.

"As I looked about me, I felt that the grass was the country, as the water is the sea. And there was so much motion in it; the whole country seemed, somehow, to be running." – Willa Cather, My Ántonia