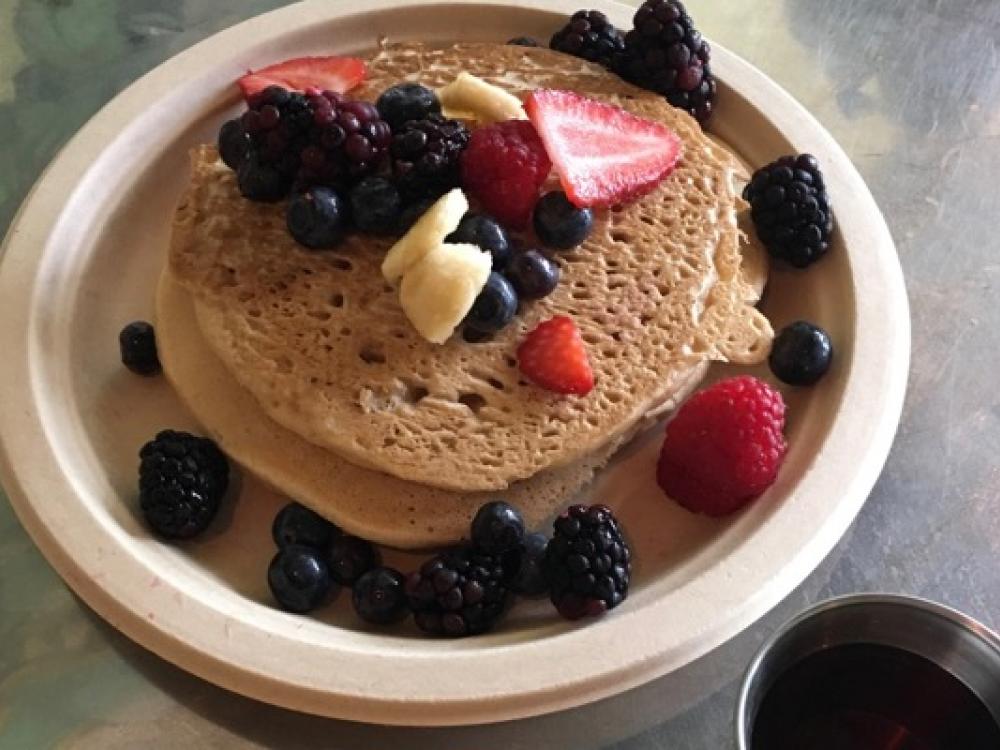 Vegan pancakes are one of the brunch items now served at the Healthy Hippie in Watauga. Photo by Karl Thibodeaux.

You know DFW is getting green when a plant-based restaurant turns up in Watauga.

The Healthy Hippie is a vegetarian and vegan cafe that opened in October on Denton Highway. We discovered it after seeing an ad for their new Sunday brunch, which launched this month. 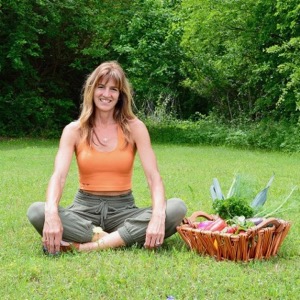 Kelli Myatt, a Keller-based dance, fitness and nutrition coach, is the healthy food guru behind the restaurant.

Myatt, who grew up in Dallas, has always been a fitness buff. She studied dance at Booker T. Washington High School for the Performing and Visual Arts and went on to became a classical ballet teacher and fitness instructor.

Kelli Myatt is the owner/founder of the Healthy Hippie. Courtesy of the cafe.

She said her food epiphany occurred 15 years ago, during the holidays. She was hanging out in a book store after a traditional holiday meal and noticed how bloated, tired and bad she felt. At that moment, she found herself standing in front of The Great American Detox Diet, a book written by Alex Jamieson, the girlfriend of the filmmaker of Super Size Me.

The Detox diet was what Jamieson used to bring her boyfriend back to health after his 30-day experimental binge at McDonald’s. Myatt was hooked.

“The next day I cleaned out my entire pantry,” said Myatt.

She eliminated what she refers to as the "big five" – meat, dairy, sugar, alcohol and processed foods.

She quickly discovered how much better she felt. 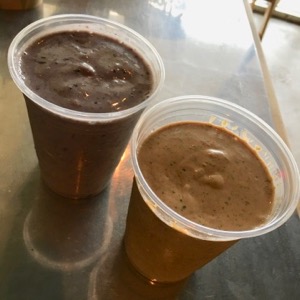 Soon she was coaching friends and family members who envied how healthy she ate. Though not a certified nutritionist, she accompanied them to the grocery store, schooled them on how to shop for whole foods and shared her recipes.

These delicious Fruitberry Fields and ChocaDelic shakes are vegan. Photo by Karl Thibodeaux.

After friends encouraged her to start a business, last summer, she began selling her plant-based protein bars, snacks and shakes at Keller Farmers Market.

“We had a line every week,” said Myatt. “I realized how hungry people are for this kind of food.”

Then a friend told Myatt about an open space in a shopping center and encouraged her to open a storefront.

Myatt felt like she was being led to a new venture. Going with what seemed like the flow, she opened the Healthy Hippie in October. 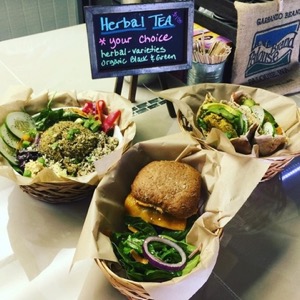 Since then a steady stream of customers have sought out the cafe for its plant-based bowls, burgers and pocket sandwiches. Soups, chili, nachos and hummus fill out the menu, along with Healthy Hippie energy bars, teas and protein shakes. Almost everything is vegan with the exception of a few items, such as the broccoli bites, which have dairy-based cheese, and the sesame-seed burger bun, which has honey.

Last Sunday, the cafe began offering a plant-based brunch menu - a rarity in North Texas. Everything we tried was yummy including a short stack of whole wheat vegan pancakes, served with a choice of agave or maple syrup, and fresh fruit. Afterwards, we savored a couple of delicious and filling protein shakes - one fruity, one chocolatey - and sampled three flavors of protein bars. (Our favorite was the Hemp.) Hot and fresh locally sourced Avoca coffee was served with plant-based creamers. Other brunch items available included vegan and gluten-free waffles, quinoa bowls, amaranth porridge, oat bowls, a breakfast pocket sandwich and eggs.

So how does a healthy hippie cope with running a restaurant while raising a family and teaching dance, fitness and food classes and tending a large garden?

“It’s given me new insight into people who used to tell me they were too busy to eat healthy,” admitted Myatt.

However she said the restaurant is truly a labor of love that consumes her off-time as well.

“Everytime I take a day off, I give myself a new thing to do - I come up with a new recipe or new feature.”

As for being green, the business strives to be zero waste. All refuse is recycled or composted into Myatt’s expansive organic home garden, which supplies much of the fresh produce for the restaurant.

For those new to the plant-based lifestyle, this is the place to come with questions and an appetite. Myatt is no food snob and accepts where others are on their food/health journey.

“The transition to plant-based eating needs to be a more peaceful transition,” said Myatt. “I’m more about knowing what you’re eating and where it’s coming from and being aware of how it makes you feel.”

About: Vegan-Vegetarian restaurant with brunch and and monthly seasonal and holiday specials. Food classes and catering are also offered.