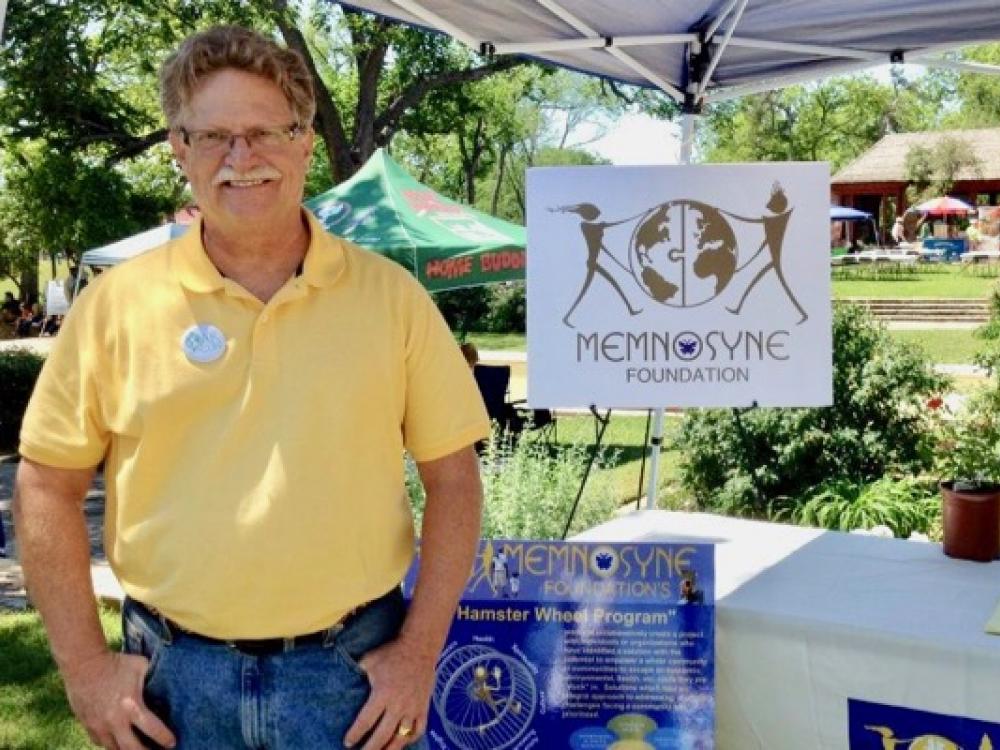 Coke Buchanan, director for three centers at Green Source DFW's parent nonprofit, the Memnosyne Institute, died Monday at the age of 66. Above, Coke at the Memnosyne booth at Oak Cliff Earth Day in 2012. Photos courtesy of the Buchanan family.

It was a full moon when Coke Buchanan, one of our colleagues at Green Source DFW, passed quickly from a heart attack in the early morning hours of May 28. The loss is almost too much to bear for the many communities he touched. Coke wore many hats at the Memnosyne Intitute, the parent nonprofit of Green Source DFW. He served as the director of its Centers for Global and Local Outreach, Indigenous Cultures and Spirituality. He’d recently worked closely with Green Source DFW staff and volunteers to merge Oak Cliff Earth Day and the Run for the Environment. His passage breaks so many hearts it's devastating. 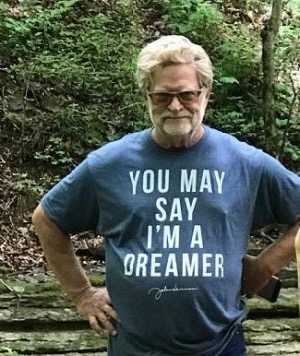 Coke on a family trip in Arkansas in late May. Courtesy of Facebook.

Memnosyne is hosting a tribute for Coke, A Celebration of An Extraordinary Life at 7:30 p.m. on Thursday, June 7, at Cathedral of Hope, 5910 Cedar Springs Road in Dallas. The event includes a video montage with stories, readings from his writings, a candlelight flute performance, testimonials from various communities he served and the spicy food that delighted him. The event will also be live streamed on The Memnosyne Institute's Facebook page.

Coke and the Environment 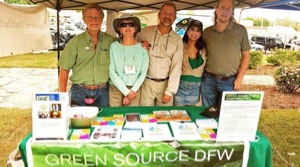 Coke’s sister Lybo Buchanan had been involved in Oak Cliff Earth Day since its inception. While the Memnosyne Institute had been a major sponsor of the green fest for many years, it was only last year that Memnosyne took over the festival when it was in danger of going by the wayside. Together the Buchanan siblings worked with Green Source DFW director Wendel Withrow to revive the popular grassroots fest and combine it with Green Source DFW’s annual Run for the Environment and give it the Memnosyne stamp.

“Coke was like a whirlwind,” said Lybo. “He had all these wonderful ideas of what he wanted to bring to the event, and worked hard to make it happen. Vendors, website, entertainment, activities, all of it. He personally rented a truck to deliver all the tables to the event when the rental place backed out at the last minute.”

“If the environment is not healthy, then neither are we,” she added. “Life and nature share a symbiotic relationship. Coke felt strongly that this important message needed to be shared and Oak Cliff Earth Day was the perfect way to do that. He was so looking forward to next year’s event.“

“Coke touched so many lives, planted many seeds, and did his best to leave the planet a better place,” said Lybo. 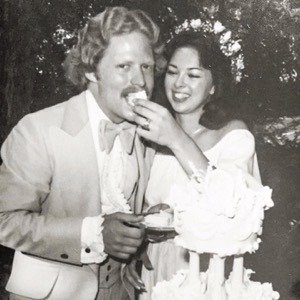 For all his many interests, family was the core of Coke’s life. He married his childhood sweetheart Bonita, producing daughters Briana and Kate. He remained close to his sisters Lybo and Viki, plus Jann, now deceased.

Childhood sweethearts Coke and Bonita Buchanan tied the knot in 1976.

The Buchanan family home on Stonegate just north of Inwood Village in Dallas was legendary for its welcoming spirit and embrace of life.

“That was due in a large part to our parents” said Lybo. “It was often filled with family, friends, a dog or two, a cat or two, and at one time Avery, the infamous monkey.“

Coke attended college at the now University of Texas at Denton and completed his bachelors degree in business administration at Southern Methodist University. He enjoyed a successful 26-year career in telecommunications with Southwestern Bell/AT&T and Source, Inc., always breaking new ground and forging alliances. 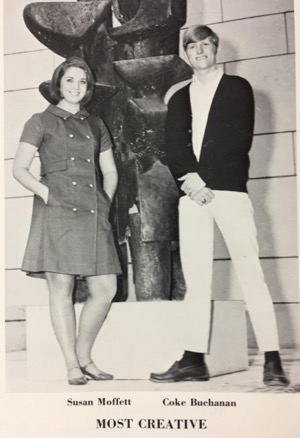 Coke’s commitment to community service began at age 19 with Big Brothers of America and the I Have A Dream Foundation. He served as the JFK Assassination Information Center communications director and co-authored “Nightmare in Dallas” with assassination eyewitness Beverly Oliver.

Coke showed his creative side early at Thomas Jefferson High School in Dallas.

Peace, environment, indigenous people, human rights - Coke was there, on the ground, making his mark and doing it with an ebullient smile. His good works continued after his death by donating all major organs.

“He didn’t care if you were Christian or Muslim, black or white, straight or gay, human or animal,” said Lybo. “He embraced everyone. Like everything Coke did, he did it with passion. He loved people, and most of all, he loved bringing people together.” 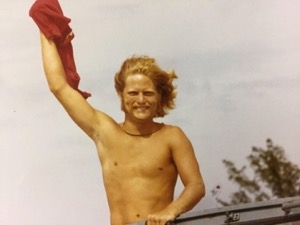 Coke in his hippie days.

As his obituary stated, “Coke was funny, generous, optimistic and always had a story to tell. He struck up conversations with people everywhere he went and tried to coax smiles from all he met.” He was described as “the problem solver, the voice of reason, the negotiator and the mediator” with “a contagious, loving, passionate enthusiasm which inspired all who knew him."

As a pal said: “He was definitely one of the good guys.”

After his vital assist in getting Memnosyne started, Coke led its Center for Indigenous Cultures. A few negotiations he was instrumental with include:

•First treaty in 300 years between Hopi and Navajo nations via the Hopi And Navajo Alliance to strength their opposition to coal company operations harming native land. 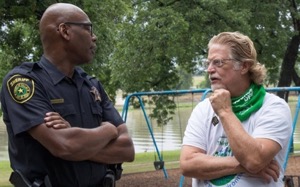 Coke at the Green Source DFW Run for the Environment in 2017. Photo by Karl Thibodeaux.

•The Historical Society, City of Aspen and Aspen Center for Environmental Studies project with •Ute leaders in rewriting Colorado historical markers to acknowledge the Ute’s history.

•Menil Collection collaboration with the Maori based on artifacts the museum possessed.

•Acknowledgment of Tolteca tribe’s continued existence by the DeYoung Museum, resulting in Mexico’s adherence to the United Nation’s agreement granting that community the full human rights promised to indigenous communities.

•Creation of The International Summit on Indigenous Environmental Philosophy that resulted in The Redstone Statement of global indigenous leaders and environmentalists.

Coke also gave significant help to the Sioux community at Standing Rock, the Liberian community in New York and The Poor People’s Campaign in Texas. 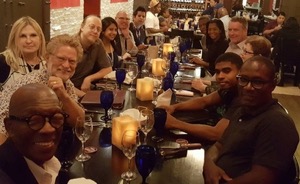 “Coke was my friend and the co-director for Oak Cliff Earth Day. He was a tireless worker for many causes which gave a voice to the voiceless and promised a better life for all. He will be greatly missed by all.”

Coke, second from left, at a Memnosyne function.

My darling brother Coke, my heart is broken, but my soul is filled with love for you. I too will miss your phone calls with your bright ideas, or calling to bounce something off me, or just to keep you company while you were driving. I will miss your coming by in the middle of the day and taking me to lunch. I will miss the projects we shared together. I will miss your humor, your stories, your cooking, your smile, laughter, shared memories and your goodness. There was so much passion in all you did, and the world was so much brighter when you were in it. 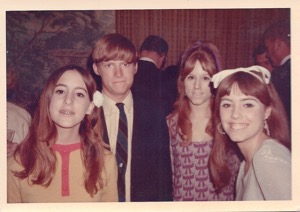 The Buchanan siblings circa 1967. From left, Viki, Coke, Jann and Lybo.

My heart is broken. My sweet brother Coke, you were such a pure soul who gave his everything to everybody. You touched so many lives in the most spiritually uplifting way. Our life was made brighter by the light your spirit shined on us. I will think of you every day for the rest of my life. I will miss your phone calls when you would start with "I have the greatest idea..." You were a creator whose visions were so powerful.

Coke lived a uniquely fascinating and extraordinary life – rich with a passion for giving and aiding in transition in every way imaginable. We lean not on our own understanding but trust in God's divine plan and timing. Coke's legacy is one of light, love, kindness, healing, fellowship, and creation of understanding.

Such a legacy and such a loss. It was a privilege to meet Coke through work on the Poor People’s Campaign, and to learn more about his extensive contributions to the many causes he cared about.

Coke Buchanan’s life work is breathtaking in its purpose, scope and impact. His leadership skills were a beautiful melange of gentle, strong and heartfelt. His care and compassion lead his journey through this lifetime. How fortunate Memnosyne has been to have his light leading so many of the paths Memnosyne has forged. He was a beautiful man on every level.

We will always remember his kindness and his love for all those he served in his role as Navigator for the Indigenous Projects with the Memnosyne Foundation. He has surely earned his angel wings.

A Celebration of An Extraordinary Life

About: A tribute to the Memnosyne Institute center director and cofounder Coke Buchanan

Hosted by: The Memnosyne Institue

Where: Cathedral of Hope, 5910 Cedar Springs Road in Dallas. The event will also be live streamed on The Memnosyne Institute's Facebook page.