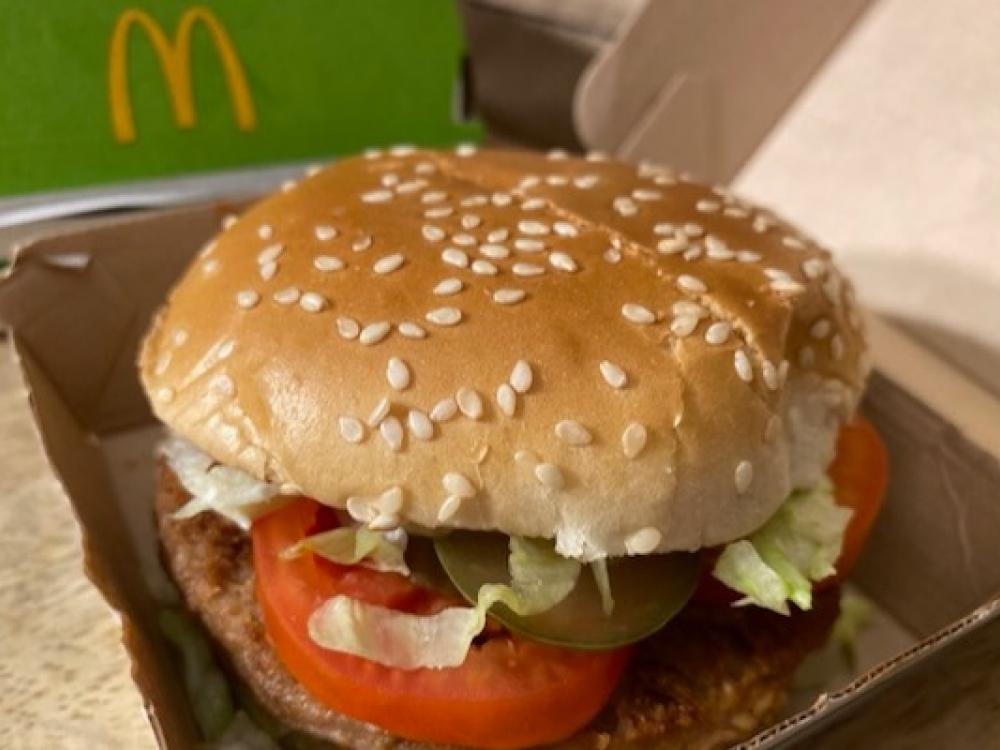 McDonald’s is offering its new McPlant burger in 300 locations in Texas. Photo by Andrew Ridout.

From Chipotle, with its Sofritas burrito, to Burger King, with its Impossible Whopper, more and more food establishments are getting onboard with the burgeoning vegan movement.

Just a decade ago, it would have seemed truly "impossible" that a national chain would introduce a 100 percent plant-based meal. But vegan food has edged its way into the mainstream market. So it’s no surprise the world’s largest fast food chain, McDonald's, has hopped on the vegan bandwagon too.

There have been rumors about a plant-based patty from the Golden Arches for the last couple of years. So I was excited to see it finally rolled out.

McDonald’s began testing its new McPlant burger in October in eight restaurants, spread out across the country. The test was so successful that the burger is now available in 600 locations across Texas and California on a larger trial run.

I was able sample one recently in North Texas and found it pretty tasty. The patty itself had a nice flavor and basically tasted like a conventional hamburger. But it's made from a combination of peas, rice and potatoes. This is no surprise, as McDonald’s and Beyond Meat collaborated on the McPlant formulation.

Just as important, it was served in a biodegradable pasteboard box, which highlights another initiative by McDonald’s — that by 2025, all of its packaging will derive from renewable, recycled or certified sources. The company also aims to offer guest packaging recycling in all of its locations.

I admit, before I became vegan, Mickey D’s was one of my guilty pleasures. I would sometimes indulge in their cheeseburgers, chicken nuggets, fries and more. Though it may be a while before the chain offers plant-based alternatives for those, I am happy to see that it understands the potential market for the ever-growing population of vegans worldwide.

As for other fast food chains, Burger King has offered a plant-based burger, the Impossible Whopper, since 2019. Although I generally don’t encourage eating too much fast food, you can’t beat the convenience of getting a burger at the drive-thru while simultaneously supporting the company's efforts to cater to the vegan crowd.

Burger King also recently opened a 100 percent plant-based location in London, UK. It offers items such as a vegan Katsu Royale, a spiced-up chicken sandwich. In addition, Burger King aims to convert 50 percent of its traditional menu to plant-based items by 2030. The company also has a goal of donating 10 English pence — about 13 cents — on select items to a charity that plants trees in cities. Kudos to Burger King for some important steps in the right direction.

A quick comparison of the McPlant burger and an Impossible Whopper — they’re both tasty and what you would expect from fast food.

If you’re looking for a hardy, fill-you-up meal with fries and a drink, choose the Burger King option. However if you’re satisfied with a slightly smaller, more snack-size burger, the McPlant is for you.

A warning to strict vegans — be aware that if you try the McPlant burger, and want it served vegan, you must ask them to “hold the mayo and cheese,” as those extras are not plant-based. And note that the patty will still be cooked on the griddle alongside animal-based products. (Both true for the Impossible Whopper.) Also be advised that McDonald's famous fries contain beef flavoring and milk-based ingredients.

Although McDonald’s hasn’t announced its next step for the McPlant, you can currently try one at more than 300 locations in Texas — most of which are located in the DFW area — while supplies last. Visit the McPlant website to find a participating restaurant near you.