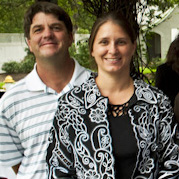 Todd Moore, owner, says that you hear a lot about family-owned businesses these days, but Lucky Layla Farms truly fits the bill.  “You can find my wife Deanna at any time travelling between locations, my mother-in-law demonstrating our healthy products at various stores/markets, my father-in-law taking care of cattle and bottling at Lavon Farms, and my brother-in-law marketing our Lucky Layla brand,” he says.  “Plano Lavon Farms is considered another entity where the raw milk is sold.  “I generally oversee the entire operation.”
(Todd and Deamma Moore  Photo: Front Burner  DMagazine.com )

Moore’s grandfather bought Lucky Layla Farm in 1936 and because he liked buttermilk and because Guernsey cows produce good buttermilk, he bought that breed.  Stock farms were common in that era, so there was a variety of animals and fowl.  Upon Moore’s grandfather’s death, his dad turned the farm into a commercial dairy in 1950 and when his dad died in 1996, Moore took over the operation.   “I never had a formal education in dairy work, because fortunately Dad was willing to let me learn on his own nickel,” Moore relates.  “I’m still learning today.”

Moore says that he sort of stumbled into owning Jersey cows, because in 1990 he wanted to increase his herd and Guernsey cows were somewhat extinct, so he chose Jerseys which are similar.  “The two breeds originated on two islands off the English channel, the Isle of Jersey and the Isle of Guernsey,” he explains.(photo: entreedallas.com)

Between the 200-acre East Plano Lavon Farms and the 1,200-acre Springville Farm in East Texas, there are 350 milking cows.  The cows are fed hay and silage, but they are also pasture fed.  The milk is sold to a coop that sells to a processor.  “At this time the price of milk is pretty good, but in 2009 and 2110 we lost a large percentage of dairies, since dairy farmers were being paid the same prices as in 1979,” Moore laments.

Moore says that he works between 10 and 14 hours a day and is usually on the job at 5 a.m., making it an easy 70-hour week job.  Holidays are out of the question and if you’re not physically working, you’re working mentally.      “We have 15 employees, including me, my wife, and in-laws,” he informs.  “We start milking at 4 a.m. and 4 p.m., and I have helpers who assist me.”

“Our dairies are clean; we don’t confine our cows to concrete or certain areas and most of all, we treat our cows as mothers.”  Moore adds that their Plano Dairy features a lot of the latest equipment, but they still operate two 1977 tractors.  However, their Emory Dairy has the most up-to-date equipment available.

Detailed information can be found at www.luckylayla.com.

Minnie Payne is the food reporter for Green Source DFW, focusing on DFW stories that include agriculture,  sustainable wines, green grocers, community gardens, green restaurants, etc. She’s open to all food story suggestions from readers. She was a writer for Pegasus News and presently freelances for Living Magazine and Frisco Style Magazine,  contact her at  972-416-2823, [email protected]