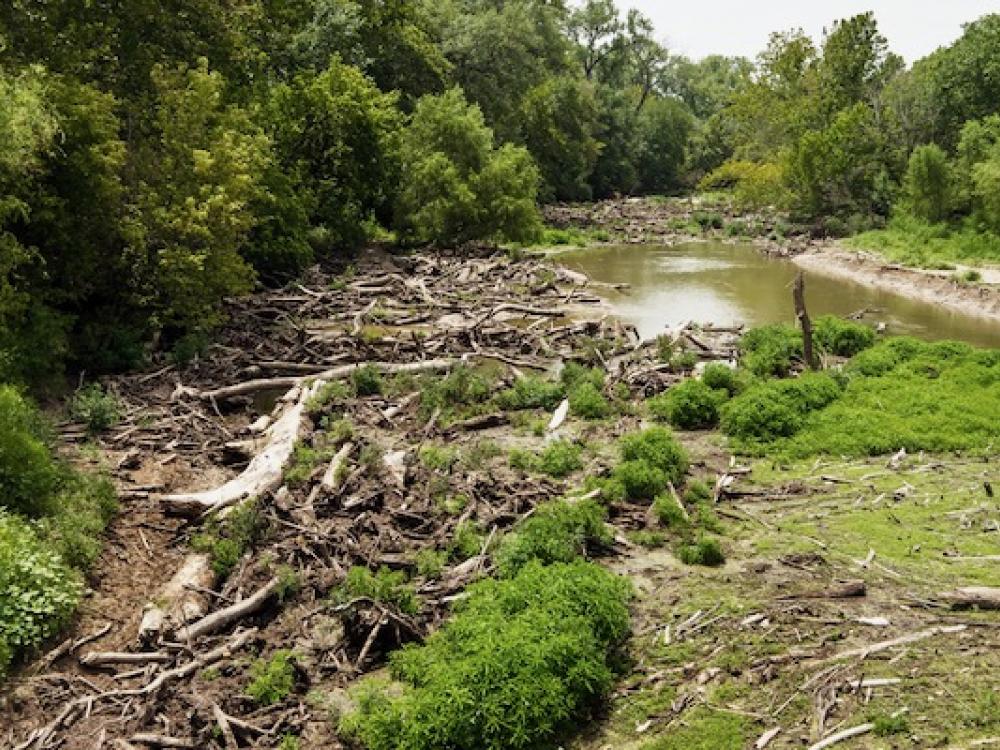 The log jam caused flooding that kept half the Greenbelt's trails closed since 2015.​ Photos by J.G. Domke.

A massive log jam that kept half of the trails in a popular greenbelt in Denton County closed for five years is finally busted up. 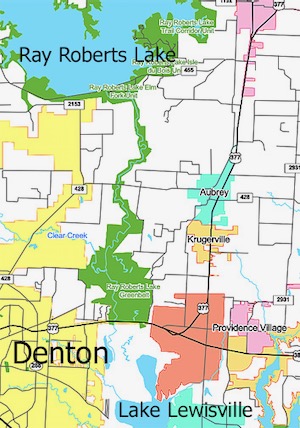 The logs were bottled up just south of U.S. 380 along the Elm Fork of the Trinity River in the Greenbelt Corridor, a 12-mile stretch between Lake Lewisville and Lake Ray Roberts, managed by Texas Parks and Wildlife Department.

The excess silt and debris caused the waterway to overflow and flood the trails, rendering them off limits to hikers and horseback riders.

North Texas university geography professor Paul Hudak, who specializes in water resources, told the Denton Record-Chronicle in September that it was the largest debris field he had ever seen and “adding that its appearance is disconcerting and ‘almost bizarre.” (See aerial photo by DRC.)

Carol Nichols, a board member of the Greenbelt Alliance and founder of the Lake Ray Roberts Equestrian Trail Association, said the closure of the 6-mile wooded stretch of equestrian and pedestrian trails from U.S. 380 to F.M. 428 has been a source of frustration for years.

In March, she spearheaded the effort to get the log removal “rolling.”

Lake Lewisville was built in the 1950s and Lake Ray Roberts in the 1980s to provide flood control and water sources for the surrounding communities.

In the 1990s, the region began to flourish as a recreation destination when the Texas Parks and Wildlife Department created Lake Ray Roberts State Park. Multi-use recreational trails were added along the greenbelt that joined the two lakes south of the State Park. The Greenbelt Corridor accommodated hikers, bikers, joggers and horses. In 1999, the City of Denton opened the adjacent Clear Creek Natural Heritage Center, along Clear Creek, which feeds into the Elm Fork.

Avid horseback rider Nichols began riding on the trails in 2009 and founded the Lake Ray Roberts Equestrian Trail Association shortly after to advocate for keeping the trails maintained.

Around the same time Richard Rogers led a group of residents to form the Greenbelt Alliance, which stopped a proposal to turn the Greenbelt into a utility corridor for huge towers and powerlines. 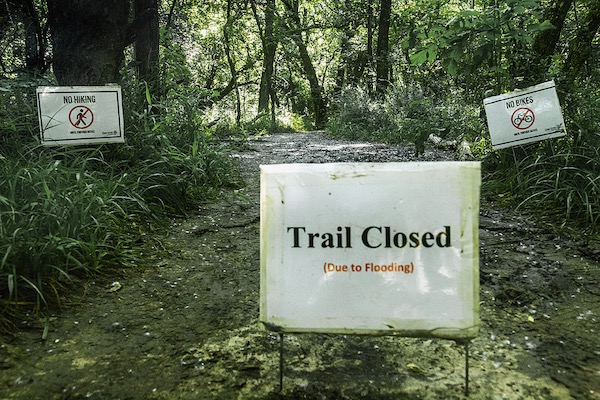 Up river at Denton's Clear Creek Natural Heritage Center, trails were flooded and had to be closed in May. Photo by J.G. Domke.

All were enjoying the trails until the floods in 2015.

After a 50-year drought in Texas, it started to rain and rained so hard in 2015 that the United States Army Corp of Engineer’s “flood plain” between Ray Roberts Lake and Lake Lewisville looked like a swamp.

They had to hold back the water for months before letting water go downstream.

Trees locked together as silt built up along the creek. Ravines washed out horse and hiking trails and the parking lot at the 380 trailhead looked like a lake. Since then, half the Greenbelt Corridor has been closed.

As the years passed, Nichols' desire to get the trails reopened grew. She remembers riding the washed out trails in the lower half of the Greenbelt.

“I love those trails,” she says.

She said over the last decade, her organization has raised around $500,000 in grant money and donations to maintain the trails.

“We have been spending a lot of our money and taxpayer money to get federal grants to repair and restore the recreational trails, just to have them wash-out again.”

After talking to colleagues, it became clear that the log jam, south of Highway 380 that had been slowly building up over the years was the source of the problem upstream. 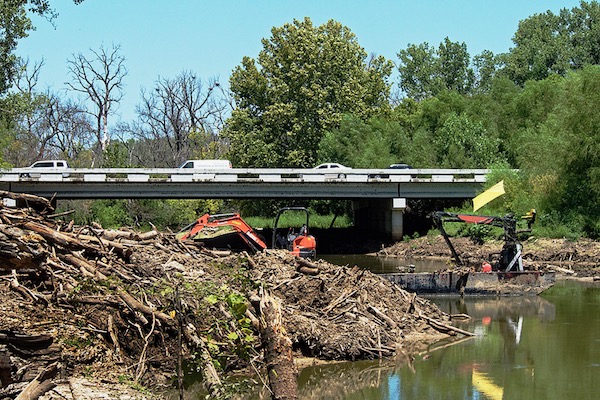 She organized a conference call with local stakeholders including City of Denton, U.S. Army Corps of Engineers, Texas Parks and Wildlife Department and the Trinity River Authority. She also reached out to Steve Smith, founder and president of the Trinity Coalition, which had succeeded in assembling a 130-mile paddle trail along the Trinity.

The Corp of Engineers said they had been short of funds and were hoping nature would take care of the problem.

But with just a 100 foot drop between the two reservoirs there isn’t enough water-power to move any logs. Ray Roberts Lake would normally release 1000 cubic feet an hour but was now being forced to release only 200 cubic feet a day due to concerns about flooding. The logs were staying put, and more trees were falling into to the creek.

Smith remembered attending an environmental workshop set up by the North Central Council of Governments with a presentation from the Texas Department of Transportation. Had anyone talked to TxDOT, he asked?

Smith helped Nichols get in touch with the director of the workshop and “miracles of miracles she was able to get highway funding to clear a log jam.”

TxDOT put out bids, found the contractor in June, to “ensure the integrity of our system bridges upstream” with the Corp of Engineers approving the dredging under U.S. 380/U.S. 377.

As a result, the contractor recently removed approximately 2,300 cubic yards of debris from the Elm Fork.

But Greenbelt Alliance and the Lake Ray Roberts Equestrian Association see this as only phase one. 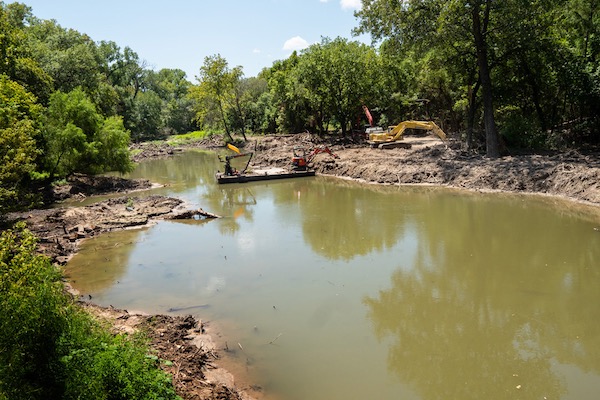 In August, 2,300 cubic yards of debris was removed from the Elm Fork. Photo by J.G. Domke.

“We want to get the first jam cleared and hope that before they move their equipment, we will ask TxDOT, can you please work on these other jams?” says Nichols.

She said there are more logs piling up farther upstream. Plus she wants to put a maintenance plan in place to prevent future problems. She envisions this work could be done with help from local volunteers.

“I’m pleased with the progress so far, but I don’t want to stop too early,” said Nichols.

“There’s been lots of damage to the environment, maybe not be as bad as an oil spill, but the fish aren’t there because of the log jam, the birds aren’t there and the people aren’t there to enjoy it.”