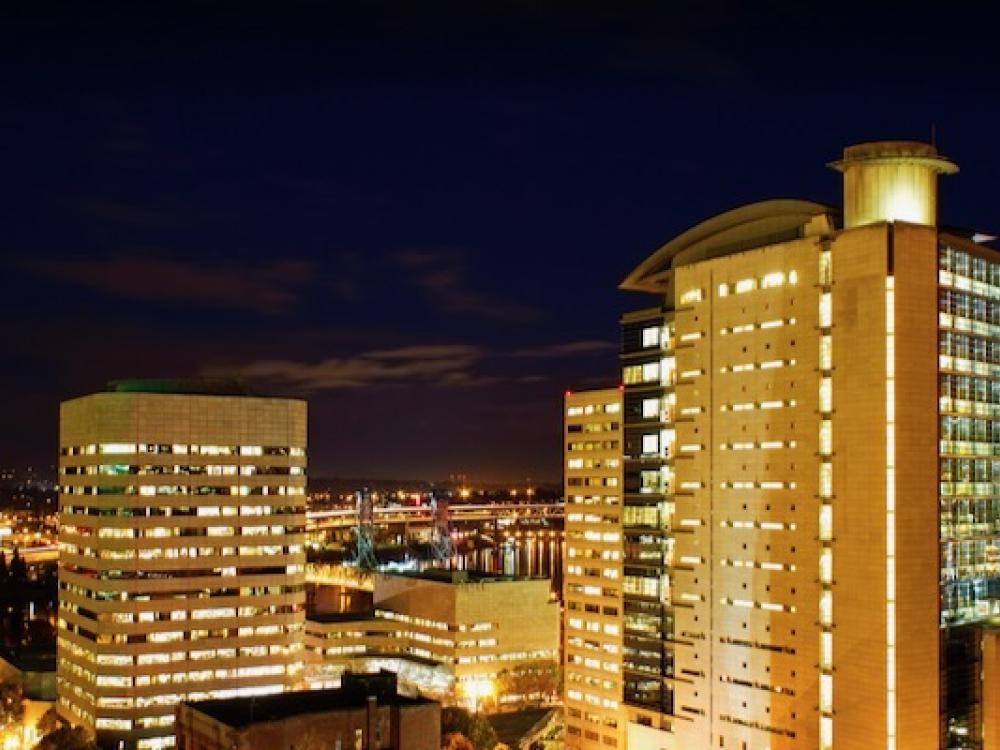 Lights Out Texas asks homeowners, businesses and managers of tall buildings to eliminate or reduce lighting between 11 p.m. and 6 a.m. during the peak of the fall migration, Sept. 5 to Oct. 29.

Texas plays a critical role in bird migration as the anchor for the Central Flyway. We talk to Ben Jones, executive director for the Texas Conservation Alliance, who explains how turning off lights from 11 p.m. to 6 p.m. during peak migration months in fall and spring can help save the lives of millions of birds. Marshall Hinsley reports. For more information, see Lights Out Texas. Listen to more episodes of the Texas Green Report.

MARSHALL HINSLEY: How you can help save up to a billion birds every year, just by flipping a switch.

In this episode of the Texas Green Report, a production of Green Source DFW and the Memnosyne Institute.

MARSHALL HINSLEY: We all know that a lot of birds fly south for the winter and then come back to North America in the spring, but every year for an estimated four or five hundred million -- some say up to one billion birds, that journey is cut short by fatal collisions with the buildings that they literally run in to along the way.

Ornithologists have been spending years trying to understand why so many birds have a fatal attraction to buildings and other structures, and the common denominator they’ve found is that the buildings that kill the most birds are all lit up at night, and nighttime is when most migratory birds do their migrating.

To help reduce the number of birds we’re losing from such an easily preventable cause, the Cornell Lab of Ornithology has partnered with conservation organizations throughout the country to spread the word about how you can help save birds by just cutting the lights. The campaign is called Lights Out, and Ben Jones of the Texas Conservation Alliance says Lights Out Texas is something every Texan can get behind because it’s really just a simple action. 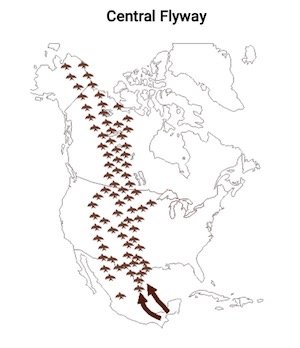 MARSHALL HINSLEY: For eons, and long before our night skies were lit up by cheap lighting, birds evolved to take advantage of migrating at night because that’s when it’s cooler and they’re safe from birds of prey. They developed the ability to stay on course in the dark of night in part by using celestial lights sources: the moon and even the stars. Now that humans have apparently declared war on the night sky, birds have been confused by all the light shining up from the ground and reflecting off the clouds.

BEN JONES: So, they fly down into brightly lit land areas, which are basically the cities. And when they get down there, they circle a lot of times confused and can die of exhaustion, if they don't actually hit a building on the way down, they land down in the downtown areas, or in the brightly lit residential areas. And then there are many dangers that are in place there. So, they're drawn down into these areas where there are many windows and walls that can lead to collisions. Also other dangers like feral cats and traffic, et cetera. Also scarcity of food and water sources. So that's the issue with lights — drawing them down from their natural, high migratory elevations down into areas where there are many hazards.

Among the worst of these hazards is glass. If you’ve ever bumped into a clean glass door, you know what a bird travelling at a high velocity faces when he dives down head first into what he thinks is a protective alcove. If the head-on collision with a window or shiny surface doesn’t kill them instantly, a bird who’s made such an unfortunate mistake can suffer disabling trauma, which makes them unable to get back to their flight.

And the solution to this avian death toll: just turn out the lights. 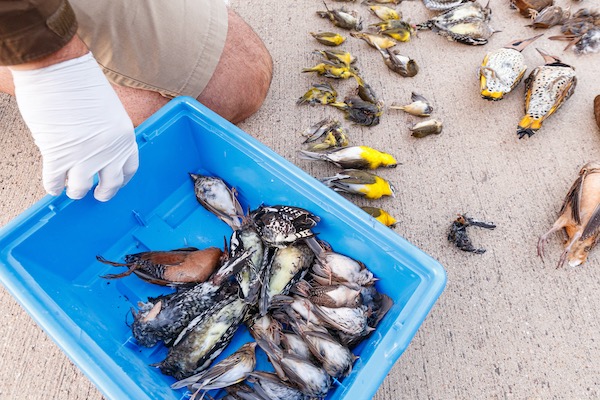 Volunteers for Lights Out Texas collected 233 birds this spring that appear to have been killed by colliding into buildings in downtown Dallas during migration. Photo by Sean Fitzgerald.

BEN JONES: There are studies that show an 80 percent decrease in collisions between a building that's lit, and a building that does not have light emitted from it.

MARSHALL HINSLEY: And it’s not an all or nothing situation. It doesn’t take everyone turning out the lights before we start to see birds being spared.

BEN JONES: You can imagine in a downtown filled with glass and mirrored glass, when one building goes dark, there's a compounded effect across that whole block, in even from blocks many, many yards away. Because the light of the one building is reflected off surfaces of other buildings and then reflected again from other buildings. And so you have this really extraordinary compounded wonderful beneficial conservation effect when one building goes lights out.

MARSHALL HINSLEY: Of course, the more who do sign on to the Lights Out Texas campaign the better. And it’s not just among the densely packed skyscrapers of Houston, Dallas and Austin where the lights need to go out.

MARSHALL HINSLEY: Jones says he knows there are some lights that simply can’t be cut. The campaign focuses on a call to turn off or at least dim all non-essential lighting during the migration period: that’s landscape lighting, signs and parking lot lighting for businesses that are closed for the night, and any light that really serves no life-saving or safety-critical purpose. It’s up to the homeowner or business owner to make the determination between critical and nonessential lighting.

Lights Out Texas is a campaign that’s only a couple of years old, but it has a chance to bring about a huge benefit for the birds that travel through the state to get to their winter or summer grounds. The change it calls for is simple: cut the light when birds take flight, and it’s already garnered the support of the state’s most reputable institutions.

BEN JONES: Lights Out Texas is this amazing collaboration among a number of organizations. The campaign is driven by Texan by Nature, the Texas Conservation Alliance -- my organization -- the Perot Museum of Nature and Science, Texas A&M University, Texas Parks and Wildlife, and a wonderful gathering of Audubon centers and chapters across the state.

In Texas we have so much to be proud of, and we are a proud state and rightfully so. But a lot of times people don't realize we play a pivotal role in bird conservation. Texas is a major state for migratory birds, especially because we anchor the central flyway, which is like this superhighway of migratory birds -- a route that goes down to the center of the country. So, Texas should be proud and some really critical that we stay a step forward and take action on this front, because what we do here, right here in Texas, has an exponential effect that impacts all of North America's bird population. Sixty plus percent of the migratory birds in the United States are passing through our state every year, twice a year. So it's important that we do everything we can to give them safe passage.

MARSHALL HINSLEY: To learn more about Lights Out Texas and what people are doing to make Texas a better place for birds, visit our website at Green Source DFW dot org.

Listen to more episodes of the Texas Green Report.