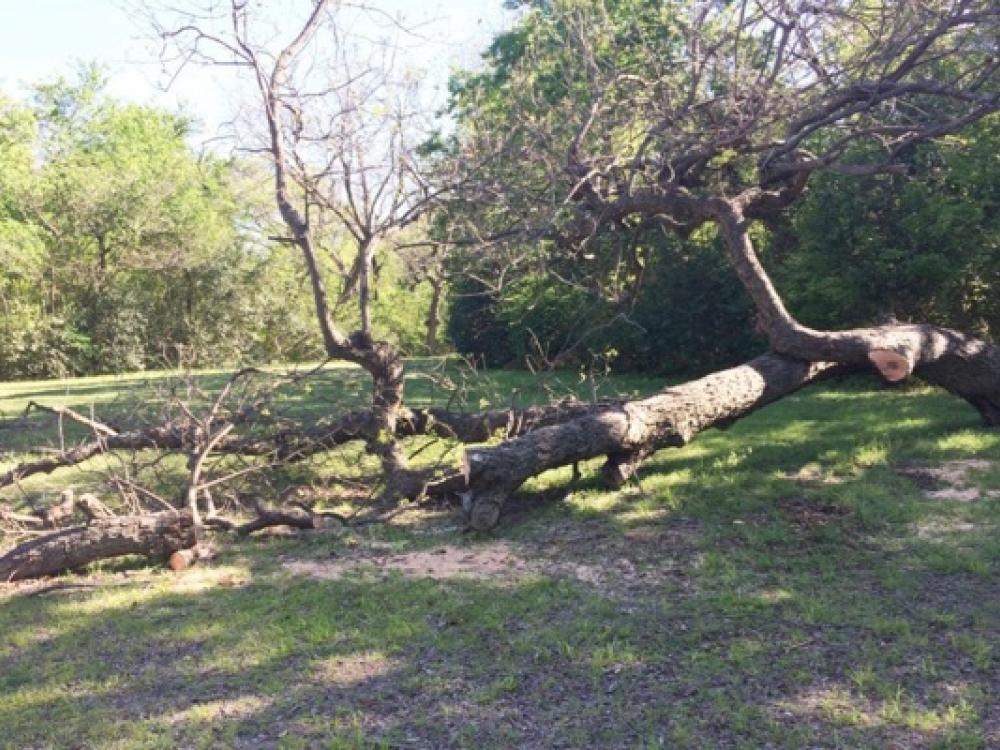 A vandal was stopped when neighbors noticed he was cutting up a park tree for firewood in the Dixon Branch Greenbelt last month. Photos by Amy Martin and Scooter Smith.

“The tree which moves some to tears of joy is in the eyes of others only a green thing that stands in the way." - William Blake 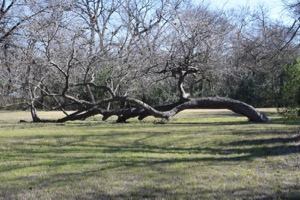 Oh no! Not again! Not that tree, not our tree, our landmark, our friend. Located on Peavy just past Lake Highlands in the Dixon Branch Greenbelt in Dallas, the leaning pecan tree grew near horizontal to the ground, earning it the nickname "Indian marker tree." Though at an estimated 75 years it’s too young. For decades Eastlake residents, including this writer, have treasured this tree. Families have taken holiday pictures perched on the tree’s horizontal trunk. Groups picnic there. Small children clamber over it so much the bark is worn in places; after all, it’s at their level. And now it’s almost all gone.

High-wind storms blew through Dallas early morning on March 30, leaving trees blown down by wind. With workers all over the park clearing trees, a vandal took that opportunity to carve the landmark tree into pieces. Pecan trees all over Dallas parks have been under assault by cutters who sell the wood at a premium price to meat smokers.

This was the fourth assault on the tree. One incident last fall was stopped by alert residents who called police, though the vandals were let go without charges. Requests for signage and fencing were declined. Neighbors since then have been extremely observant of the tree.

Pecan trees all over Dallas parks have been under assault by cutters who sell the wood at a premium price to meat smokers.

Late that March afternoon, residents caught the latest assault and called police, even blocking the vandal’s truck and trailer so he could not leave. Within minutes, tree lovers from Eastwood, Lake Park Estates, Lochwood and Old Lake Highlands neighborhoods had gathered, demanding that this time the vandal be arrested.

Police arrived and questioned the vandal, who stated he was authorized by the city to cut storm-downed trees, but could not provide paperwork backing his claim. Residents showed the police photos of family gatherings at the tree, children having Easter egg hunts around it. They expressed their love for the tree, its legend as an Indian marker tree and how it served as a landmark for the area. 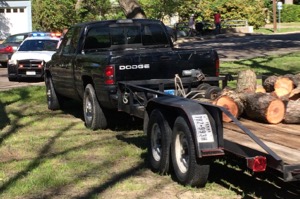 A member of the Eastwood Riparian Committee, which are the volunteer stewards of the Dixon Branch Greenbelt section across Peavy, called Karen Woodard, a city forester, who in turn tracked down Russell Hooper, district supervisor for the park department. Even though on vacation, he fought rush hour traffic and came over.

Hooper gave the tree a valuation of a minimum of $10,000, which allowed a charge of felony criminal mischief. He confirmed to the police that the property was part of Lake Highlands Park and the cutting was unauthorized. The vandal was arrested and taken away. After removing the cut pecan wood for safe keeping, his truck and trailer were towed.

As things were wrapping up, councilman Mark Clayton came by, saying his office was flooded with calls. He expressed his concern to the officers and thanked Hooper for coming by on vacation day. 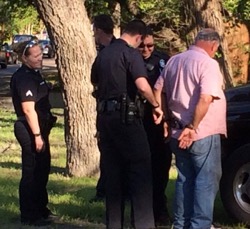 It was shocking to see the post-assault tree! One of the main horizontal trunks had been cut in two and carved into chunks. Many limbs were cut. The tree was decimated. It will never look as it did before.

A steady stream of residents came by, each one was upset, angry, even livid. Some angrily confronted the vandal. They stood in vigil. A little boy touched the tree and cried that “my tree is hurting.” A girl, Harper, came by with a band-aid for the tree. Heartbreaking!

"The message is clear: You mess with our trees, you better be prepared to take on the entire neighborhood.” - Keri Mitchell, advocate Lakewood/East Dallas

Recovery is going to be touchy. The tree is expected to survive, though it is deeply damaged. There is enough canopy left to regenerate it, but it will be slow. Eastwood Riparian Committee is pursuing park approval of post-trauma tree care by licensed tree professionals. Once a total cost is established, a fund will be set up to receive donations for the effort.

The Future of the Tree 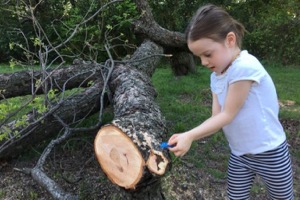 Because park department policy is that all new trees and plants installed on park property must have very expensive automatic irrigation, planting another tree is impossible. Residents are pursuing the possibility of a serious wildflower seeding around it, hoping that if it seemed more like a garden, vandals would pass it by.

Harper applies a band-aid to the hurt tree. Photo by Tim Rogers.

Signage is also being pursued, giving the tree an informal designation like “neighborhood landmark,” noting that even though besieged by weather and floods (which is assumed what pushed it down), and assaulted multiple times by vandals, nonetheless it persisted.

With residents' love for the tree, they have taken responsibility for it. They will continue to love the tree, even as it looks now. It will always be their beloved landmark tree.