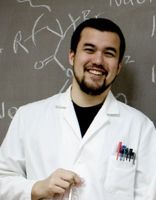 An SMU graduate student wants to change the way we look at chemistry. Shannon Woodruff, a Ph.D candidate, who works in the research lab of Professor Nicolay V. Tsarevsky, recently won the Ciba Travel Award in green chemistry from the American Chemical Society.

Often referred to as a form of molecular-level pollution prevention, green chemistry is the design of chemical products and processes, based on a set of 12 principles, that reduce or eliminate the use and generation of hazardous substances in order to increase human health and environmental safety.

“It all boils down to using less chemicals, recycling them and being aware of where the chemical waste goes to,” said Woodruff.

Woodruff will use his award to attend the 245th National Meeting of the American Chemical Society in New Orleans, where he'll report on his research on polymers.

The California native said he was glad to find a way to combine his love of chemistry with helping the environment. He hopes a new generation of chemists going forward will use chemicals more responsibly.

“Chemistry has gotten a bad name because of all the pollutants,” he said. “We’re cleaning up after our predecessors.” 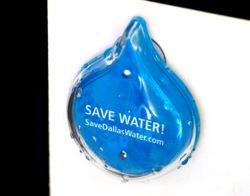 At Earth Day Dallas, we picked up a nifty water conserving gadget. The city of Dallas was handing out waterproof timers designed to stick to the walls of your shower. They run for 5 minutes and give users a blinking warning light at 30 seconds to go.

According to SaveDallasWater.com, five minutes is the recommended maximum time for showering. At a rate of 5-10 gallons a minute, a 10-minute shower can use as much as 100 gallons of water. If you didn’t get a timer, Dallas water utility customers can pick one up at Dallas City Hall.

According to Carole Davis, manager of the Water Conservation Division, the city's conservation campaign, which launched in 2002, has made a difference. Since 2001, water usage in Dallas has dropped by 20 percent per capita.

To change behavior, Davis said they employ education, outreach and rebates, including  their “New Throne for Your Home” campaign.

“The program has been a tremendous success,” said Davis.

Since 2007, the department has given away 60,000 high efficiency toilets. Dallas water customers who live in homes built before 1992 may still quality for the free fixtures. 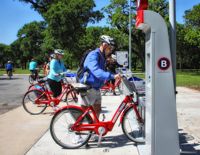 On Earth Day, bicycles were added to the public transportation options for residents and visitors in Fort Worth. For the April 22 launch of the city’s bike sharing program, 300 volunteers rode the new bicycles to 28 stations in Fort Worth.

The program, seeded with a $1 million federal grant, is overseen by Fort Worth Bike Sharing. The bikes and equipment are provided by B-Cycle, a Madison, Wisc. based company, which also provides equipment to Houston and San Antonio for their bike-sharing programs.

Memberships can be purchased for $8 per day, $30 per month and $80 annually. Members can check the bikes out at no cost if returned under 30 minutes. Fees apply for longer rentals. The first week of operation, the program drew 229 users who took 760 trips from stations located downtown, in the Cultural District, the near south side and TCU.

Julie Thibodeaux covers environmental issues, green topics and sustainable living for Green Source DFW. Previously, she worked as an editor and writer at the Fort Worth Star-Telegram. Send your green bulletin items to [email protected]. Follow us at Facebook/GreenSourceDFW.com.