Editor's Note: Green Source DFW writer Julie Ryan rode to Austin with the North Dallas Texas Democratic Women on April 14, who were going in response to House Bill 40, among other issues. To environmentalists' dismay, the legislation that reduces local control on gas drilling passed on Friday 122 to 18. Read her account of the day trip to the Capitol. 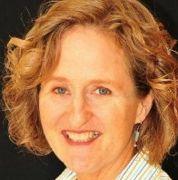 Citizen activists are streaming south to Austin, to speak up for local control of safety regulations on oil and gas operations in their towns and counties.

There’s a seat left on the bus. Why not go?

GET ON THE BUS 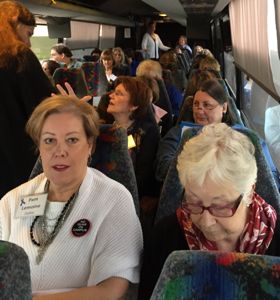 On April 14, I climbed aboard, joining four other women traveling on behalf of Sierra Club and Alliance for a Clean Texas, as guests of the North Dallas Texas Democratic Women.The Dem femmes would lobby against measures for education funding to be provided by giving tax credits to business, which bill sponsors say would help give some poor children vouchers to private charter schools.

The environmentalists were there to oppose House Bill 40, the “Denton fracking bill.”

Most were old hands – the majority mature women, with two college students.

I had never lobbied before. I’d forgotten how easy it is to look up my district number. And my representatives. It seemed as if I had paid attention to this only when deciding my vote – and forgotten the important detail of checking up on what my representatives were doing once elected.

Some not-good things, it turned out.

The month before, a North Texas gathering of environmental groups had reviewed an unnerving list of bills introduced in the Legislature. Bills affecting safety of oil and gas operations, water supply, the ability of communities to intervene in the permitting of hazardous operations – 55 environmental bills in all, 34 of them adverse to public health and safety, or restricting citizens’ rights to speak in the public interest. 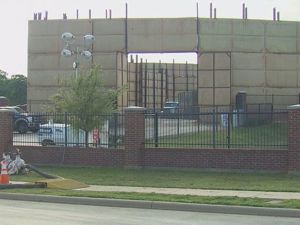 Then a fracking well blew out in southwest Arlington the Saturday before the lobby trip. It took 24 hours to cap, with 99 residents evacuated. The fire chief said it was lucky that no fumes escaped.

Going to Austin in person was the natural next step for some North Texans concerned about how gas drilling was going to be regulated in the future.

Above, fracking fluid leaked from a natural gas drilling site in Arlington on April 11 causing new concerns about the safety of fracking. Courtesy of WFAA.

“Ladies, I’d like to give you some pointers on lobbying,” announced our trip co-leader, over the PA system.

“First of all, R E S P E C T.  Be respectful at all times. I may use the word ‘moron,’ at home among my friends, but not in the Capitol.  The person next to you on the elevator may be the aide of the legislator you just met.”

Information packets were passed out, with floor maps of the Capitol and the Capitol Extension, legislators’ office numbers, and names and locations of those belonging to our hosts’ party. Our small squad of five had our own packets, with a Dallas Morning News editorial and Environmental Defense Fund research, with details on three cities among the 300 whose regulations liable to be overturned by pending legislation. House Bill 40 was up for floor vote that day.

Through the day, in two teams, the five of us called on a total of more than 30 representatives and senators. Their aides, that is – the legislators were in session. 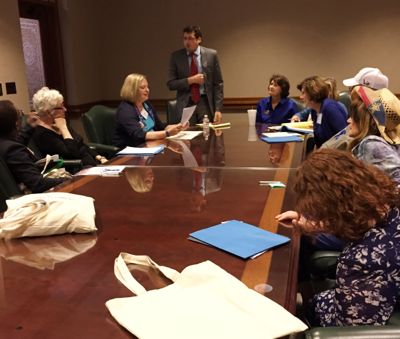 Our reception was uniformly polite and relaxed and friendly in most offices. It was also uniformly negative. All of the legislators were either decided, or strongly favored, voting for state control of oil and gas operations under House Bill 40.

Talking with Senator Huffine's chief of staff. Courtesy of NDTDW.

Uniformity, regularity, clear expectations for oil and gas companies were their bywords. The environmentalists had objections: health hazards cropping up throughout the Barnett Shale, with nuisances and dangers for which residents had no sure recourse – established regulators, the Texas Railroad Commission and Texas Commission on Environmental Quality were underfunded, understaffed and not keeping up – and cities such as Dallas, Fort Worth, Mansfield had spent years developing ordinances with oil operators at the table, now to be overidden.

WHY CAN'T WE BE FRIENDS?

After a few calls watching the practiced lobbyists, newbies began to make their cases, as well.

At one point, in the office of Rep. Rodney Anderson (R) of Fort Worth, I suddenly found myself enjoying the give and take. Although disagreeing, both sides were clearly listening to each other, and enjoying it.

In fact, the “thank-yous” on both sides as we left offices felt sincere – even when the discussion had gotten pointed.

“This needs to happen more often,” I thought. Maybe if we all talked more, we’d be less polarized. Where can you find a calm atmosphere where opposing sides listen respectfully? Maybe if we had started way before the session began. Maybe if we had more public venues for face-to-face political conversation – instead of sitting isolated watching shouting faces on cable TV.

Maybe if there were less lobbyist money in the system.

CAN YOU HEAR ME NOW? 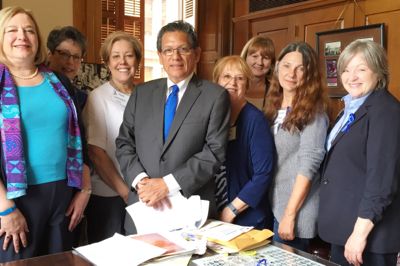 What citizen lobbyists did last Tuesday didn’t change anything measurable. HB 40 was tabled that day, for a technical glitch that marred the transcript of comment from committee. Their efforts did remind legislators of public health and safety protections that many Texans demand, and the state will have to provide by other means, if local safeguards are overturned. More was to happen, but not for several days.

It was exciting, being in the energy of the Capitol. The building and all its details are stately and beautiful. It was intriguing to hear the observations of seasoned participants.

I may be able to recognize oil-and-gas lobbyists, now. I don’t walk in just anywhere with my Sierra Club bag turned badge-side out. And I look for common ground to address with the person in front of me.

I see how hard environmental lobbyists work. We put in a 14-hour day. And the next day, I called my own Texas senators, whose offices we’d missed.

They say, the only voices that speak louder to legislators than paying lobbyists, are their constituents. I recommend it. I recommend learning how to speak your mind persuasively without blowing your top. I recommend making your vote count.