Green heros in the spotlight at Green Source DFW Awards 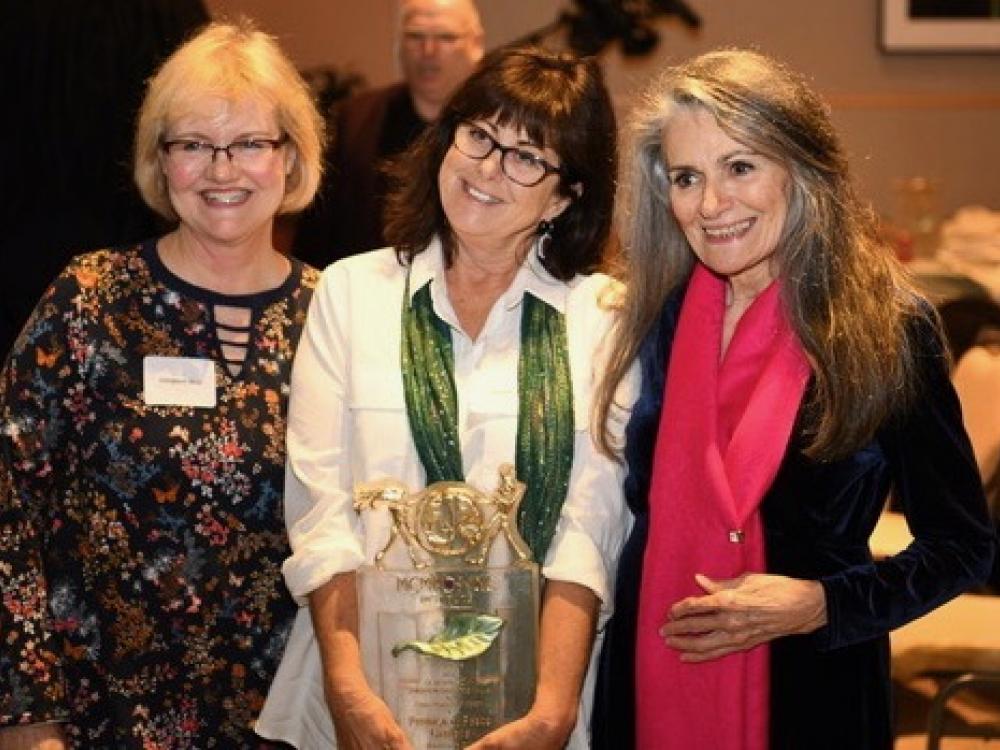 North Texans from every sector of the green community came out to celebrate local green trailblazers at the Memnosyne Institute's 7th annual Green Source DFW Sustainable Leadership Awards on Thursday at the Dallas Arboretum.

The evening kicked off with a video message from Memnosyne cofounder Mary Ann Thompson-Frenk, who spoke of the power of every individual to change the world with the advances and accessibility of modern recording technology and social media.

“Every single one of you has the capacity to make the kind of impact on this world that so few before you have every done. We’re living in a society that is more interconnected than ever.”

Hear the full video message from Thompson-Frenk, who was unable to attend because she was in New York City receiving the Women's Entrepreneurship Day Civic Pioneer Award at the United Nations:

Shout Out to the GreenSourceDFW community - Gratitude and Good News!

Indeed, the winners throughout the evening were examples of individuals who put their stamp on their communities.

Green Source DFW director Wendel Withrow served as emcee and led off by noting the passing two eco-warriors - the Memnosyne Institute’s Coke Buchanan, who died in May, after helping to bring back Oak Cliff Earth Day. WIthrow also noted the passing of Ed Lowe, the Dallas-based owner of Celebration Restuarant, who founded the Friends of the Brazos River. Lowe fought to keep the Brazos from being drained by the Brazos River Authority. He died in Big Bend National Park last week on a river trip. 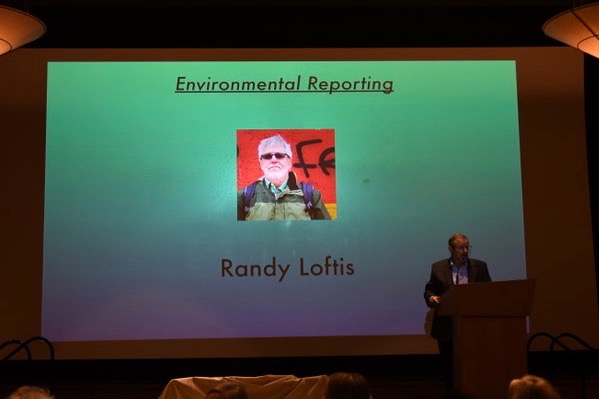 The Environmental Reporting award was given to Randy Loftis, the environmental reporter at the Dallas Morning News for 26 years. Loftis continues to work as an independent journalist and is passing on his wealth of experience to the next generation of environmental journalists, as a full-time professor and faculty member at UNT, which is why he couldn’t attend the awards - he had a Thursday night class.

The Environmental Science and Innovation Award went to the DFW Air Research Consortium, a partnership of local universities, municipalities, nonprofit groups and citizens aimed at monitoring air quality in North Texas. DFW ARC is now overseeing the establishment of DFW's first independent air quality network,  the first network of its kind in Texas. 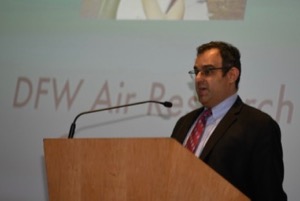 Dr. David Lary accepted the award for Environmental Science and Innovation on behalf of DFW ARC.

UTD’s Dr. David Lary, one of DFW ARC’s leaders and one of the nation's foremost authorities on environmental sensors and monitoring, accepted the award.

The Conservation Activist Award went to Don and Debora Young of Fort Worth. 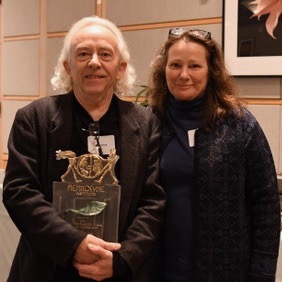 The Youngs founded the Friends of Tandy Hills Natural Area in 2004 in response to the arrival of urban drilling in Fort Worth. They launched the earliest protests against fracking in the area to help protect the last remnants of the prairie in Fort Worth. In 2006, they created Prairie Fest at Tandy Hills, the first green festival in North Texas, which had a 10-year run. Last year, they hosted the largest bioblitz ever held in North Texas, if not the state, to launch data collection of species at Tandy Hills. In addition, they created an educational program, Kids on the Prairie, which introduces thousands of school kids to the prairie and is helping create the next generation of conservationists and environmentalists. 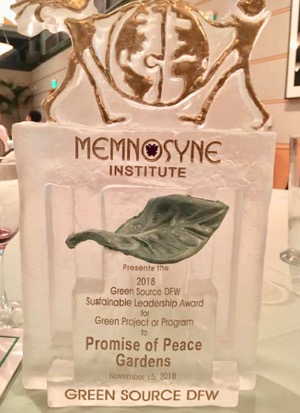 The Green Project or Program Award went to Elizabeth Dry, founder of Promise of Peace Gardens.

Promise of Peace Gardens was founded by Dry in 2009 and operates three community gardens in the Dallas area, focused on teaching children about the importance of choosing a healthy lifestyle and caring for both the people and the natural world.

All three gardens are located in food deserts and add more than 2,500 square feet of crop-growing space and much-needed fresh fruits and vegetables for the communities nearby while teaching participants how they can grow some of their own healthy food. 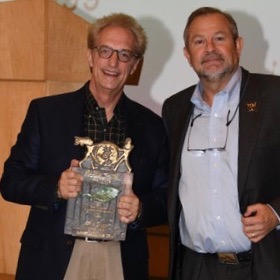 The Coke Buchanan Volunteer of the Year Award went to David Griggs.

Griggs is a civil attorney in Dallas and an instructor in Government at Brookhaven College. Griggs has been an environmental activist in Dallas for more than 20 years, campaigning against polluters and as well as promoting environmentally responsible initiatives. He lobbies for environmental bills before Texas legislators and testifies before the Texas Railroad Commission, Texas Commission on Environmental Quality and the EPA. As the current political chair of the Dallas Sierra Club for almost a decade, Griggs has played a significant role in helping Dallas elect a City Council devoted to sound environmental policies. Griggs also is the founder of the statewide Sierra Club PAC "Turn Texas Green," which helps Sierra-endorsed candidates with funds for their campaigns.

The Environmental Justice Award went to the historic Freedman’s neighborhood of Joppa in Dallas. 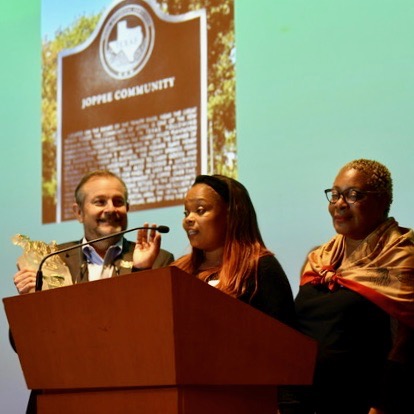 Temeckia Derrough accepted the award on behalf of the community. Earlier this year, Derrough and the citizens of Joppa partnered with others from the North Texas green community to help stop a batch plant from being built in their community. In a year with many environmental setbacks nationally, this was one of the feel-good environmental stories of the year.

The Unsung Hero Award went to Kenneth Winn for his efforts to clean up his south Dallas Pleasant Grove neighborhood. For over a decade, Winn has been picking up trash and bandit signs in his Litter Patrol Truck, which is tricked out with waste cans, anti-litter signage and litter cams mounted on the sides.

Community activist puts the pleasant back in the Grove 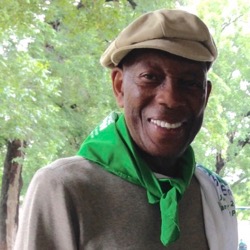 The Founders Award went to the Memnosyne Institute's Executive Director Phillip Collins, who was traveling in New York with Thompson-Frenk.

“Phillip has the job of herding cats,” said Withrow, with chuckle.

The Memnosyne Institute is the parent nonprofit of Green Source DFW and many other projects, including FoodSourceDFW, a network to fight food waste and hunger in DFW, and community building in Mexico. 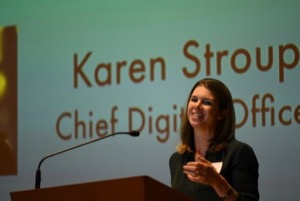 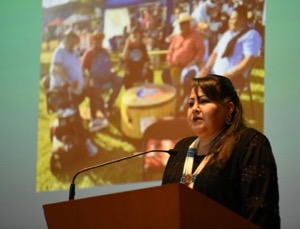 The evening was capped off with a rousing drum song from the Native American Drum group Sidewinder, led by Lance Tahchawwickah of the Comanche Nation. Yolonda Blue Horse, a member of the Rosebud Sioux Tribe, introduced the group and shared the struggle of Native Americans to keep their culture alive.

Both she and Tahchawwickah invited the audience to join forces in the fight for the environment and to look to Earth-centric cultures as their own for inspiration.