Most people have heard of the Denton County suburb, but not many have been up to the actual “Flower Mound” where the city got its name.

Legend goes, Native Americans considered the Mound a sacred site and buried their dead there. Located at the crossroads of FM 3040 and FM 2499, early Anglo settlers used it as meeting place.

Edward Marcus, brother to famed retailer Stanley Marcus, once owned the property and gave Lady Bird Johnson a tour in 1970 with the Secret Service in tow. The former First Lady, a wildflower lover, was reported to have been awed by the native flora that blanketed the hill. “I remember she said it was the most beautiful site she’d seen in a long, long time,” said former Flower Mound mayor Bob Rheudasil, who helped Marcus purchase the land in 1959. 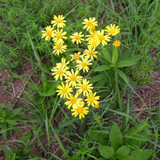 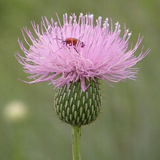 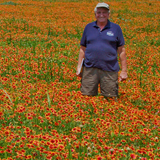 In the 1980s, a local resident, Otto Consolvo, whose wife was Native American,  convinced the developer who owned the property to sell it to the town’s citizens for $10 in 1983. As a result, the 12-acre site was saved for posterity.

The Flower Mound Foundation was formed and has served as the property’s caretakers for three decades. In recent years, documenting its plant-life became the nonprofit’s focus. After years of effort, The Flower Mound: A History and Field Guide to the Flowers and Grasses was published in 2004.

If you’re looking for a unique gift for the gardener or nature-lover in your life, consider purchasing this gem of a field guide. This beautifully illustrated book would appeal to anyone interested in Texas wildflowers, prairie ecology or the history and geography of Denton County, which are covered in the opening chapters. 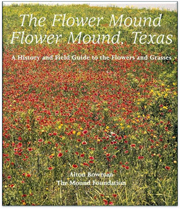 Alton Bowman, author of the book and chairman of the Flower Mound Foundation, said he spent five years researching the Mound. Bowman, an antique restorer with a lifelong interest in botany, sought help from Barney Lipscomb, head of the Botanical Research Institute of Texas Press.  Lipscomb said the prairie serves as a living snapshot of the Great Plains prairie, which extended from Texas to Canada before farming and development destroyed it. With less than one percent of the original native prairie left, Lipscomb said it’s rare to find so many species in one location anymore.

Bowman said he cataloged as many as 300 plant species on the Mound, including the “Big Four” prairie grasses: little blue stem, big blue stem, Indian grass and switch grass. All of the familiar Texas wildflowers can be spotted on the Mound at some time during the year. The showiest display occurs in May, he said.   “If you want to show off the Mound at its very best -- there are more blooms on Mother’s Day than any other time of year,” he said.  With encroaching development, preserving the Mound is more important than ever  Bowman saidThey’re even considering bringing in a small buffalo herd to clean up the prairie as an alternative to controlled burns. It might garner new interest, he said.

“Buffalo haven’t been on there in a 100 years or more,” he said. “Just to see that would be really cool.”

WHAT YOU CAN DO:
Buy the Book: Purchase the book at the Flower Mound Public Library for a $20 donation. All proceeds go to preserving the Mound.
Volunteer: Take part in the Flower Mound Foundation’s workday Feb. 9 to clear invasive plants.
Learn More: Stop by the Mound and walk to the summit. Attend the Easter Sunrise Service March 31 or the Wildflower Walk May 11. Join the Flower Mound’s Facebook page at Facebook.com/TheFlowerMound.

Julie Thibodeaux covers environmental issues, green topics and sustainable living for Green Source DFW. Previously, she worked as an editor and writer at the Fort Worth Star-Telegram. See jthibodeaux.com. Contact her at [email protected].