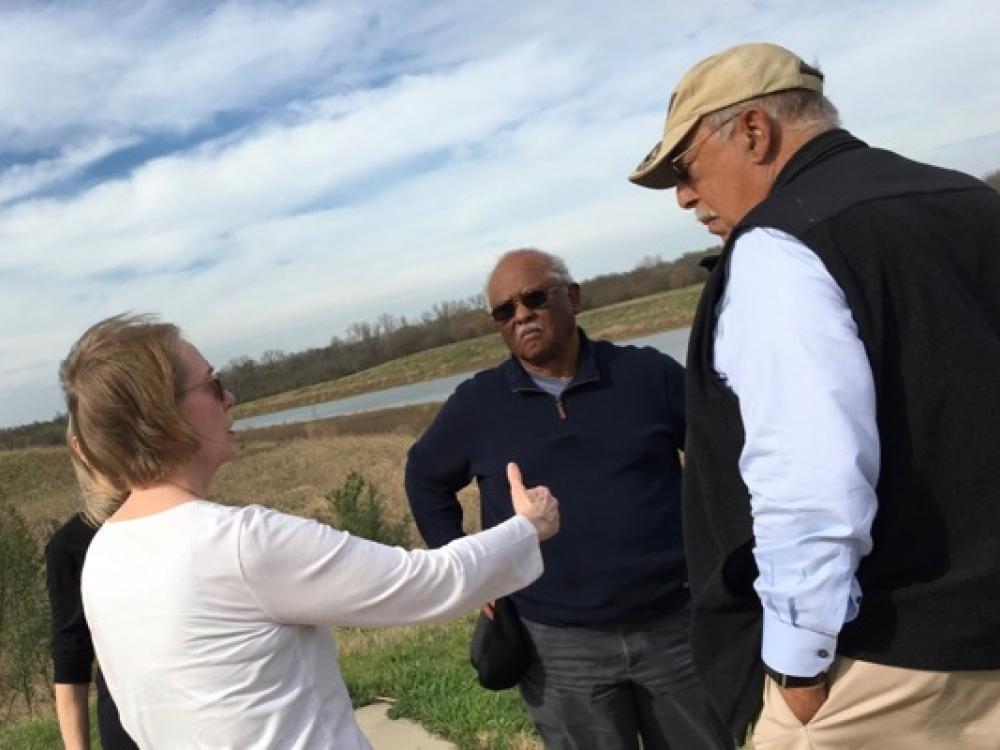 A general who became a national hero in the aftermath of Hurricane Katrina came to Dallas last week to talk about fighting his new foe - polluters.

That campaign opened his eyes to the array of big polluters that afflict the poorest communities in southern Louisiana. His high profile role in the post-Katrina emergency response led to calls for his help from residents across his home state. To heed that call, in 2013, he formed the Green Army, an alliance of civic, community and environmental groups working together for environmental and social change.

“We were at a family event, catching up, and Israel said he’d been in the army with Gen. Honore,” McMillan said.

The conversation sparked the idea for a three-day visit from Honoré, to share his experience fighting environmental justice issues in Louisana.

On Valentine's Day, Honoré joined McMillan and Anderson and some 50 activists from a rainbow array of Dallas groups, headed for three neglected and despoiled communities in southern Dallas.

Members of more than a dozen environmental and community groups, churches, the press and the city’s Office of Environmental Quality and Sustainability boarded the bus for the three-hour expedition, live-streamed on GreenSourceDFW's Facebook page in two parts. (See Part 1, Part 2.) The itinerary included a Superfund site in residential Highland Hills; the former freedman’s town of Joppa, overwhelmed by heavy industry and rail freight; and tiny Sand Branch, an unincorporated community without city or county water.

The eye-opening bus tour revealed the underside of a city vaunted as an exemplar of the “Texas Miracle” of economic recovery.

“The solution to pollution is everybody’s business,” declared Gen. Honore, from the front of the bus. “We have to care for Mother Earth. If we don’t fix pollution, pollution will fix us…We have to hold those companies accountable.” 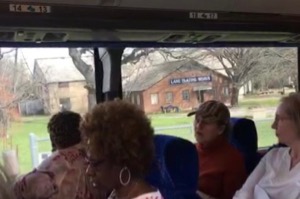 The tour trundled down Bonnie View Road, off Interstate 45 and Loop 12, overlooking rolling, tree-topped hills and the city skyline some 18 miles away.

Behind a chained gate at 5322 Bonnie View stood Lane Plating Works. The now-defunct electroplating company had used highly toxic cadmium and chromium to apply metal coatings to car bumpers and other items at this location for more than 50 years. It was declared an EPA Superfund site In May 2018, after local, federal and state inspections. Inspections, according to research by Aaron Reynaud of Legal Aid of North West Texas, that had gone on for decades.

The site drains downhill to an unnamed creek and a nearby Headstart center. The new Barack Obama Boys’ Leadership Academy stood behind the plant.

“Our group’s job is to inform and educate the community and push for complete cleanup and testing,” said Green.

Further inspection by EPA, before a decision on federal cleanup, is not scheduled until December.

Exiting Loop 12 off Route 310, the bus took a hairpin turn past a Redi-Mix concrete plant to enter Joppa. 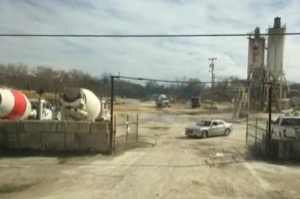 Industrial plants, adjacent to Joppa blow a layer of dust on the neighborhood, turning trees white.

“If the wind was blowing, this would be completely white,” said Temeckia Derrough, who led the community’s fight last spring against two proposed concrete batch plants.

“Union Pacific is adding two bypass tracks,” said Derrough. “There are now 60 trains a day, there will be 80-plus. And more pollution.”

She pointed out Union Pacific’s Miller Yard, acres laden with massive mounds of rock and sand.

“Look at the trees!” someone exclaimed.

Trees by the site were coated white with dust, particulate matter that’s toxic to breathe and linked to numerous health threats.

Derrough mentioned Austin Industries’ nearby concrete batch plant, noting “their air quality permit is about to run out.” 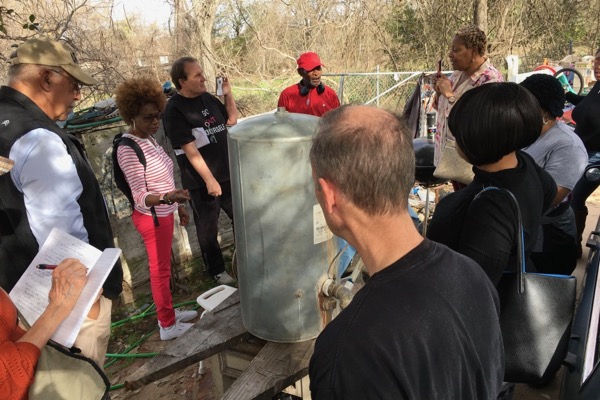 Ricky Bryan, in red hat, shows off his well to Gen. Honoré, left, and Toxic Bus Tour participants in Sand Branch, where residents do not have running water and the ground water was discovered in the 1980s to be contaminated by bacteria,

On a short side trip down 310, former regional EPA EJ director Anderson took the bus microphone.

“Gen. Honore and I have found scenes like this all across America. The land was cheap, the people didn’t have adequate representation.”

The bus crossed a narrow stream and passed a house-sized pile of asbestos shingles at 9527 Route 310. A stone’s throw across a wire fence stood a home. 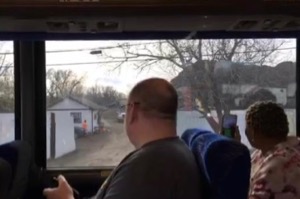 The tour passed Marsha Jackson's home where a mountain of crushed shingles sits on property in front of her home.

“That operator crushes shingles to recycle the asbestos,” said Derrough. “We found out they were doing it without the city’s knowledge – no permit. Marsha Jackson’s house faces that pile. Her bedroom window looks onto it. She’s been there 23 years. The city issued a cease-and-desist order in early December, but it was canceled before Christmas…City Manager Broadnax has come, he’s working on it.”

Anderson explained, “Residents here were originally on wells, but now those are contaminated. You could throw a rock and hit the plant, which has a water line for employee drinking water.”

Testing in the 1980s and early 1990s found bacterial contamination of the groundwater, according to the Guardian. The Mount Zion Community Church nearby had solved their water needs by collecting rainwater to carry inside in jugs.

Across the street, Ricky Bryan was working outside his weathered frame house. He showed visitors that his family, at least, had a working well. Was it safe?

He told Anderson that less than 100 people live there.

Conversation centered on ways to get water to the residents and on past efforts to get County action.

“Their old house plumbing for well water is likely too weak for city water pressure - it would blow out the pipes,” pointed out Terre Sharp of Highland Hills. “How is somebody living on $400 a month Social Security going to afford new pipes? Or pay for water? Or move away?” 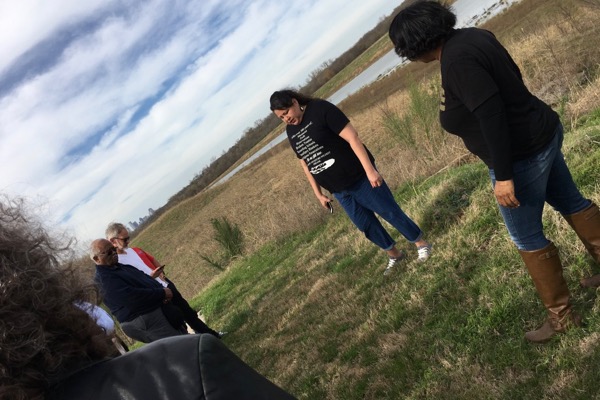 The tour ended outdoors in a Joppa park, with a private workshop for community leaders led by Gen. Honoré.

During the tour, information-gathering for him, he had not commented. He spoke the following night, addressing the environmental crisis facing the U.S. and the world to a crowd of about 180 at Holy Cross Catholic Church on Bonnie View in Dallas.

“This is the Vietnam War of our day,” he declared.

He detailed the deterioration of the nation’s water, air and land, and ongoing threats - and solutions in other countries that elude the U.S. He dismissed political differences.

“I’m in the Green Army because people in the Tea Party called me and asked for help. There’s one issue: pollution.”

“We learn to respect how we can have different political beliefs…We focus on what we have in common.”