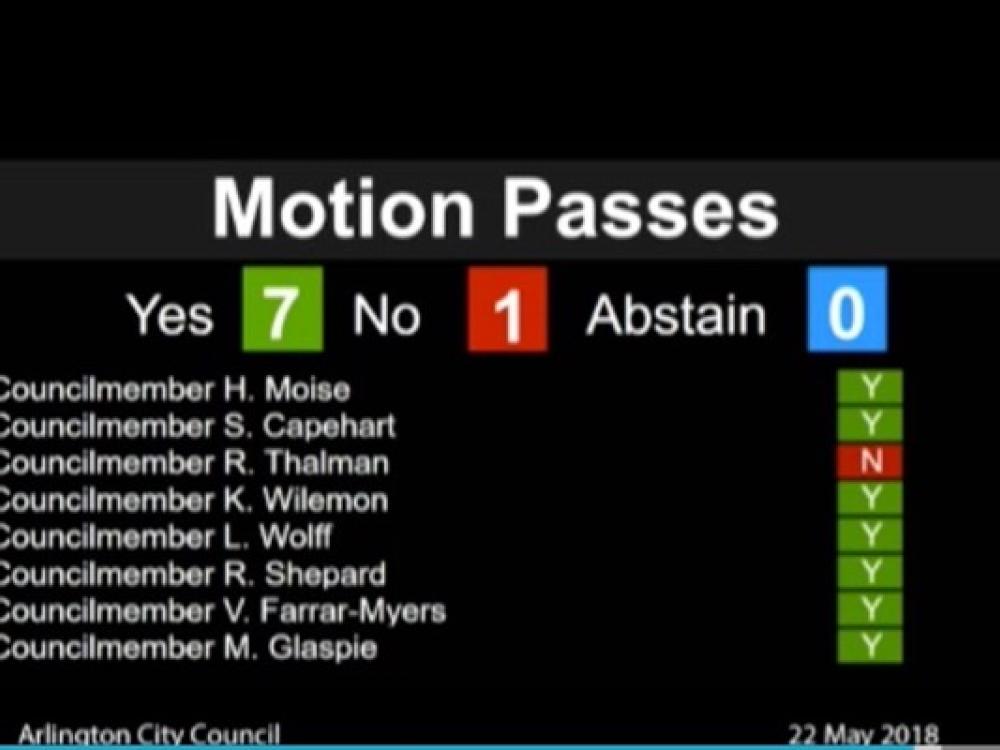 The City Council voted to waive the city's 600-foot drilling setback rule, after denying a nearly identical application in February. Screenshot courtesy of city of Arlington.

On Tuesday night, Total - among the top ten gas drilling companys in the world - struck back.

To the disapointment of more than 80 protestors, the Arlington City Council voted to waive the city’s 600-foot gas drilling setback rule, allowing the France-based company to drill within 324 feet from protected uses at Cornerstone Drilling site in southeast Arlington.

The vote passed 7-1. The one “no” vote was cast by Roxanne Thalman of District 3.

Total's application for 5427 Matlock Road was nearly identical to one that had been denied by the Council in February.

“I’m extremely disappointed like everybody else,” said Ranjana Bhandari, founder of Liveable Arlington, which led a a grassroots campaign against the waiver. “I’m also very mystified. They reversed their own vote and they never said anything about any new information they had.”

The Cornerstone Drill site was established in 2009 and has three existing wells on the site. In January, Total applied to drill three more wells within 319 feet of surrounding homes, schools and businesses. In response, Liveable Arlington rallied 40 protestors and delivered 600 letters against the drilling. The City Council voted 6-2 to deny Total’s request in February

But Total came back a few months later with a nearly identical proposal for the same site. They moved their drill pad just 5 feet and promised to move a playground in the shadow of the well to 600 feet away.

On Tuesday night, 30 people spoke against the setback waiver, with 52 sitting in opposition.

Many speakers, including a pediatrician of 40 years experience, pleaded with the Council to consider the health risks of drilling that had come to light since drilling began in the Barnett Shale 10 years ago.

Another warned against companies that want to bend the rules.

“I think it’s incumbent of this Council to be aware that the camel’s nose is under the tent,” said Peter Bagley, an Arlington attorney. “If you do this now, [Total] will come knocking on your door again.”

One person spoke in favor of the drilling, a member of Cornerstone Baptist Church, which owns the site where the drill pad is located. He said he spoke on behalf of church pastor, its elders and congregation, who “totally” support the expansion of drilling and value the revenue it's brought the church.

During the hearing, a speaker pointed out that the city of Arlington is one of the biggest lessors to gas drillers in the city. Councilman Robert Shepard admitted it was no secret that gas drilling revenue had added $100 million to Arlington’s Tomorrow Foundation Fund.

Before the vote was cast, Shepard, an attorney, asked rhetorically, why were people protesting drilling now after it’s been going on 10 years? Then he tried to reassure the audience about its safety by saying that the TCEQ and the EPA regulate all gas drilling operations. The crowd roared in laughter.

“Our objections fell on deaf ears,” said Bhandari. “It’s a serious worry. I know people who are thinking of moving. They don’t think Arlington can absorb anymore gas drilling.”