The Future of Water in Dallas Ft. Worth 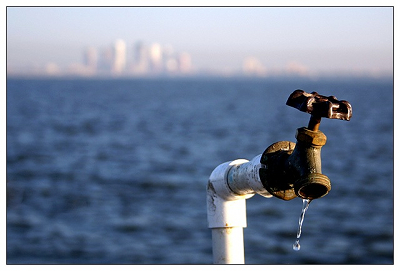 As water leaves the state and residents continue to flood the North Texas region, a grim picture is painted for the future of water supply. However, state organizations and leaders are working to conserve this precious and natural resource.

At least four cities in the North Texas region – Dallas, Fort Worth, Arlington and Irving – have instituted a twice weekly watering schedule for residents. To see a list of North Texas cities and current water programs, visit the Save North Texas Water website.

By 2060, reports estimate the population will have grown to more than 13 million, and that water demands in the area will have increased 86 percent. The North Texas Council reports that twice weekly watering will extend water supply by 10 years, even as the population of North Texas grows by 3 million over the next 20 years.

The State Water Plan, created by The Texas Water Development Board, recommends that North Texas take multiple precautions, including building four additional reservoirs to accommodate for population and water projections. All the recommendations for 16 North Texas counties would cost taxpayers $21.5 billion, $7 billion of which would fund the reservoirs.

There is debate among environmental organizations as to whether more reservoirs are the most effective, environmentally friendly and cost efficient method of water conservation.

Texas Water Matters contends that dams harm the environment, strain the economy and are unnecessary if other conservation methods are employed. The organization suggests that pipeline and reservoir plans can be about five times as costly as conservation programs.

However, organizations like the National Resources Defense Council that are basing projections off global warming trends criticize Texas for lax policies and ineffectual plans.

A report published by the NRDC forecasts long droughts interrupted by short bursts of heavy rainfall. According to the report, this trend will lead to serious water shortage. Rainfall on urban areas leads to flood risks, decreases in groundwater, pollution and greater irrigation demands.  In about 100 years, the report warns that the agricultural sector will require 50 percent more water due to the possible climate change.

The State Water Plan proactively works toward adequate, long-term water supply, but it is costly and will require a great deal of legislative collaboration before it is put into action.

Before the plan – or portions of the plan – is implemented, city officials are urging residents and businesses to think long term.

Tips on saving water both outdoors and indoors will be published next week in Green Source DFW.

Jada Brazell is a freelance writer who also consults for fashion- and art-based businesses on branding. She has written for the Odessa American, edited for the Texas Senate and RadioShack, and contributed to several magazines and newspapers in Central and South Texas.