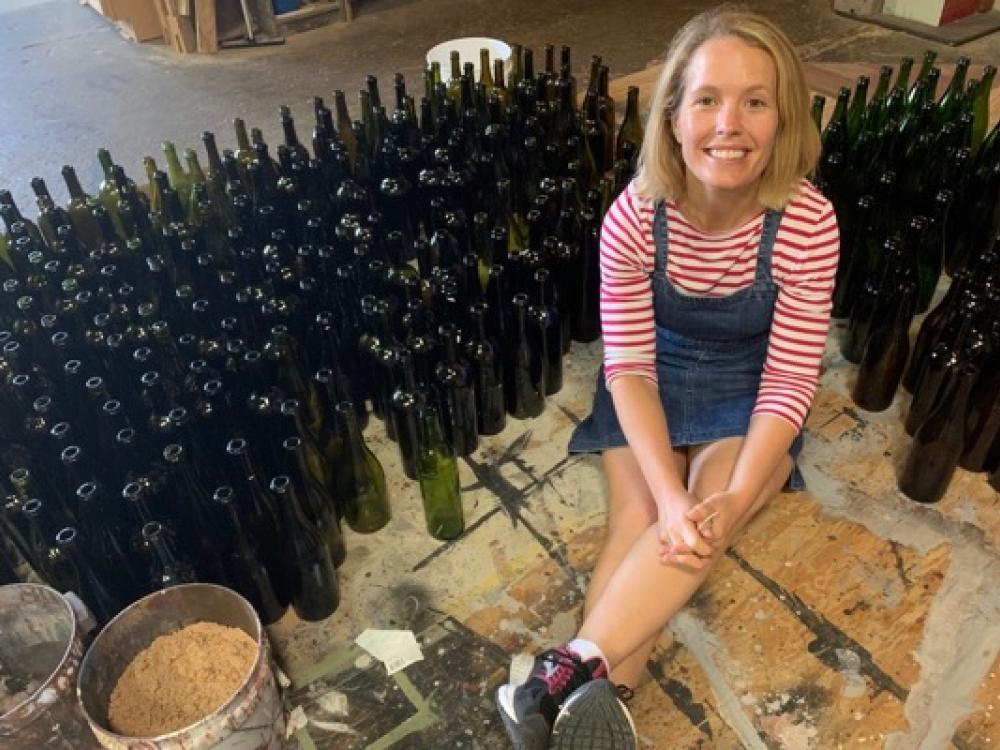 Dana Schultes, executive producer of Stage West in Fort Worth, shows off the recycled bottles used in set decoration for 'Lungs.' Photo courtesy of Stage West.

A longtime Fort Worth theater has been going green, thanks to a treehugger behind the scenes.

Since joining Stage West fifteen years ago, executive producer Dana Schultes admits she has been gently steering the 40-year-old theater in a green direction.

Schultes, who’s been with the theater since 2004, has filled many roles over the years, including development director, cafe manager, programming and marketing manager as well as actor and director. That's all before taking the helm from Stage West founder Jerry Russell in 2016. All the while, she’s been eco-friendly in her personal life.

“I pick up trash around my neighborhood,” said Schultes, who is also an avid recycler. “I grew up with solar panels in the 1980s - my dad was an engineer.”

Schultes said she started lobbying for changes soon after she was hired.

In 2007, when the theater relocated to a new building and opened a cafe, at first they used cheap disposable dinnerware. But that didn’t jibe with Schultes’ sensibilities.

“I think it started with the stir sticks,” she said. “It drives me crazy when things are thrown away.”

Unable to dish out for a full set of china, Schultes suggested cobbling together a mix-and-match set of ceramic plates to replace the disposable kind. At the time, they didn’t have a dishwasher.

“That was hard,” she said. “That meant someone would be spending two to three hours a night keeping up with dishes.”

Once they began renting a commercial dishwasher, everything changed.

Over the years, she said the staff has embraced the eco-friendly spirit.

“I'm proud that it's happening," she said. "Everyone has climbed on board with full enthusiasm."

Today, the theater’s shop reuses materials when it can and properly disposes of paint, metal, etc. Staff takes home recycling.

A few years ago, a self-serve water dispenser was added to eliminate plastic water bottles.

Most recently, single packets of sugar and creamer have been replaced by sugar bowls and creamer carafes. They're testing out paperless scripts.

Someday, Schultes hopes to power the theater, which sits adjacent to Interstate-30, with solar panels.

"People could see it from the highway. It's something that could potentially be inspiring to people."

Starting tomorrow, the venue shows off its green side with a new play that addresses environmental issues. Lungs opens July 25, for a four-week run. The play by Duncan Macmillan revolves around a thirty-something, educated and thoughtful couple who are considering having a baby. They debate whether that’s a good idea given overpopulation, climate change and an uncertain environmental future.

The set is comprised of recycled wine bottles and curtains that were already in stock at Stage West. Theater goers can also enjoy an exhibit of artwork by Becky Wilkes made from trash she’s found around Eagle Mountain Lake.

Schultes said the play brings environmental issues to the forefront in both somber and charming ways.

“It asks what does it mean to bring a child into this world from an environmental standpoint,” she said. “It raises the point that if all of the people who are aware of the problem stop bringing children into the world, there’s an imbalance of people who can fix the problem.” 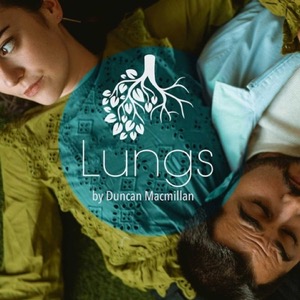 About: In the play by Duncan Macmillan, a thirty-something, educated and thoughtful couple are debating their future. In this time of overpopulation, erratic weather, and political unrest, what exactly are the right reasons to have a baby? Their debate becomes the catalyst for a love story that is both wildly universal and intimately personal.

Cost: Ticket prices range from $31 to $35, with discounts for the preview performances, and for students, seniors, and military. Food service is available 90 minutes prior to performances (reservations are advised). Use the code GREEN to get $5 off ticket.