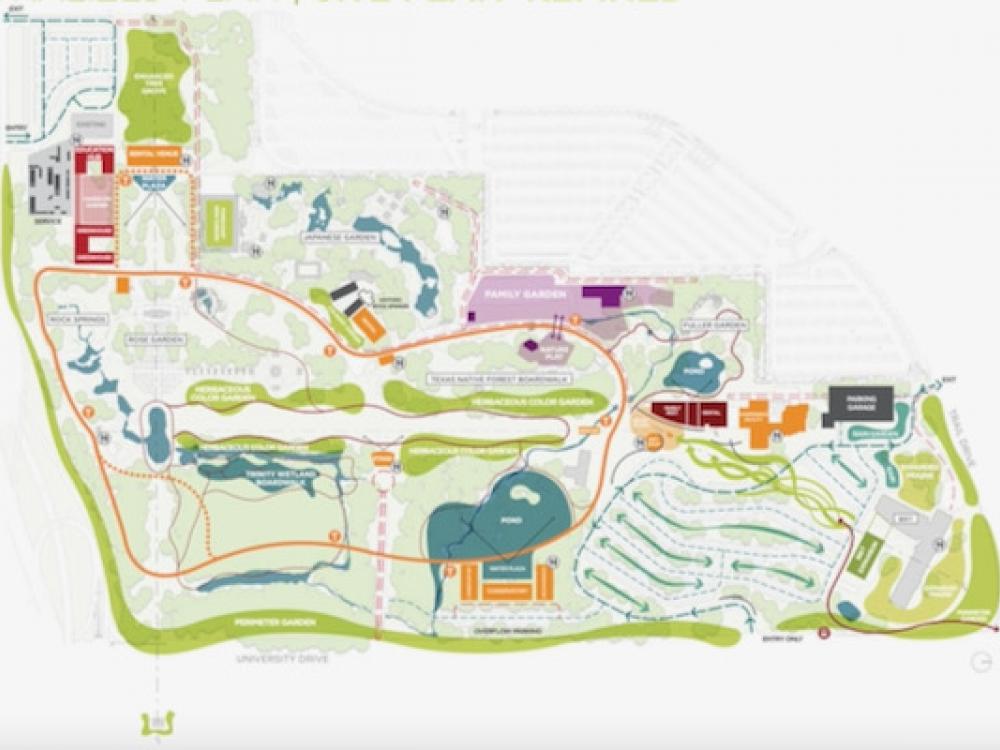 The Fort Worth Botanic Garden's master plan draft was unveiled on May 17. Courtesy of FWBG and Studio Outside.

The plan for how to develop the Fort Worth Botanic Garden has been in the works for months.

Earlier this year, the organization hosted seven public forums across the city to gather feedback on the new comprehensive master plan for the 110-acre city-owned park, the oldest botanic garden in the state.

FWBG, which merged with the Botanical Research Institute of Texas in 2020, unveiled its initial master plan draft at a community event on May 17.

"We had a public meeting and the feedback we got was that everybody liked what they were seeing," said Chris Smith, vice president of marketing and communications for FWBG and the BRIT.

The plan was developed in partnership with the Dallas-based landscape architecture firm Studio Outside, to address facility improvements and infrastructure for the next 20 years and formalize the organization’s priorities in conservation efforts and leadership.

“We fully anticipate that by the summer, there will be more edits to this,” said Andrew Duggan, a principal architect with Studio Outside. “I want to stress that this is a draft, but also, there’s been a lot of thought put into this."

Studio Outside said, first and foremost, its goal is to bring more people in to appreciate the gardens, and they hope to expand visitation and quadruple the number of visitors in the next decade.

In doing so, the firm seeks to foster a more welcoming appearance from a streetside point-of-view.

“We are envisioning a completely redone arrival sequence that helps folks through arrival into the garden in a purposeful and intuitive way that celebrates plants without really having to trip over each other,” Duggan said.

While Studio Outside wants to preserve key areas of the Moncrief Building — the garden’s welcoming center — it hopes to expand the building to allow for more opportunity.

For instance, the conservatory, which currently houses FWBG’s popular Butterflies in the Garden exhibit could become a flexible space that allows for larger indoor events, Duggan said.

Suggestions of significant renovations to the Moncrief Building, however, include larger ticket areas, rental spaces and a formal, but family-friendly restaurant.

The plan also addresses the limited parking issue and would increase parking from 320 spaces to about 900 spaces with an expanded parking lot, as well as a small overflow lot and parking garage.

“This is not going to be a traditional parking lot but would allow for easy circulation and allow for folks to get in and out off of University and be able to find a way to get some spots,” Duggan said. “We also know that university has been a challenge to get in and out of just from a traffic circulation standpoint, so we're also invested in that that is primarily a one-way entrance.”

In addition to changes at the welcoming center, Studio Outside anticipates renovations across the entire 120-acre property, though the garden’s most-enjoyed areas — such as the Japanese Garden and Rose Garden — will mostly remain the same, but slightly improved.

“We’ll do some TLC renovations and repairs to propel them forward to the next chapter of history here,” Duggan said. “But we're not really looking to mess with those at all.”

Some changes from a visitor standpoint could include a tram or shuttle system, food and beverage kiosks, biodiversity education, horticultural experiences, and more event spaces, including a permanent event stage on the lawn, where Concerts in the Garden take place, allowing for extended concert seasons and other performance events.

A culinary teaching kitchen is also potentially on the brink of new experiences at the garden.

“We really want to tailor that Fort Worth experience,” Duggan said. “So, we’re talking about classes that can really show how food grows, how it's harvested, how it’s planted and then really have the opportunity for some great guest chefs to come in and give them instructions and have a unique immersive experience.” 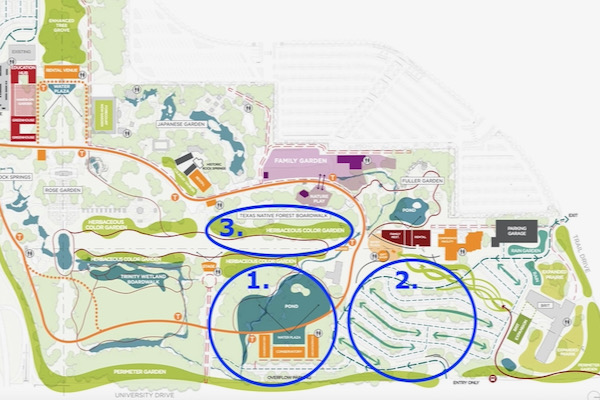 The Fort Worth Master Plan Draft. Rendering courtesy of FWBG and Studio Outside. Notations in blue by GSDFW.

GSDFW had some questions for FWBG's director Bob Byers about some changes to the plan from an environmental standpoint. See his responses below.

1. GSDFW: I’m looking at the area of the plan on the south side of the main entrance off University. It looks like the plan includes a significant cutting of the wooded area. There's a pond and conservatory drawn there in the plan. See circled area no. 1 on the plan above and the current map of the Fort Worth Botanic Garden below. 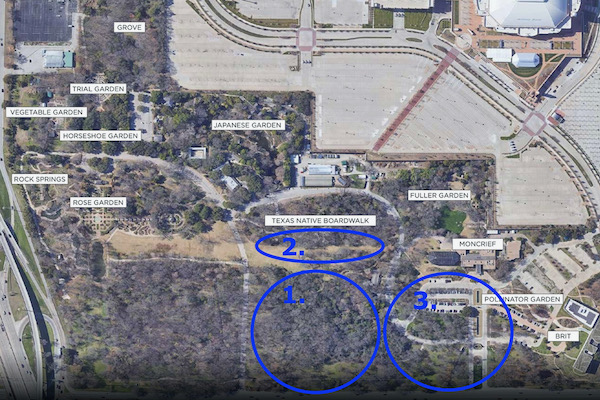 BOB BYERS: There are a few things that are influencing this part of the proposal.

The first is a large number of public requests in most of our input sessions for more water in the Garden. This helps meet that goal and also provides some additional interpretive opportunities with a larger body of water with different dynamics than we’re able to show currently.

Another thing to consider is that while there is a lot of cover here, much of it is invasive trees and shrubs or senescent older trees that are in decline. The invasives are suppressing healthy younger replacement trees, so the character of the area and health of the forest is already changing considerably and those changes are not positive long-term.

This is a draft plan and what you’re seeing now is basically a placeholder for a large water feature. There is still a lot of refinement to come, including more in-depth discussions on how we adjust this and other elements to keep as many of the good specimens as possible. One thing we’ve discussed is leaving islands or peninsulas in the pond that would help us preserve many of the nicer trees and increase shoreline and interpretive interest.

2. GSDFW: Also on the east side of the Boardwalk, looks like more trees cut for a herbaceous color garden. See circled area no. 2 on the FWBG plan and the current map of the Fort Worth Botanic Garden above.

BOB BYERS: The site for the proposed herbaceous borders is the existing vista, so most of it is already open.

We want to increase our displays of shade loving plants, particularly natives, around the boardwalk, which would not require removing a lot of trees even if we plant into the tree line.

This area also has a lot of senescent and storm damaged trees that are declining and dying. Removing some of those, while leaving some deadfall for habitat, will open up the canopy more than enough to allow such plantings to thrive without removing healthy trees.

GSDFW: Do you have an estimate of how many trees must be cut for this plan? Rather than expanding natural space, it seems like the plan is forfeiting trees for parking and venues.

BOB BYERS: We are very conscious of the importance of trees to the Garden, but a key thing the public needs to understand is that while we love the beautiful old trees in the Garden, a lot are not in good health and near the end of their expected lifespans.

We have not yet done an inventory of trees that would be cut in part because things are not fully developed yet, but an important goal we’re working in concert with the master plan on is a canopy management plan. This management plan is one of the primary objectives of our new Director of Living Collections.

A proper inventory and canopy analysis with a management plan will allow us to better manage the trees we have and be proactive about replacing those that need to be removed as invasives, due to poor health, or the limited number that will be removed for construction. The result should a healthier forest with better distribution, diversity and longevity while also allowing us to provide the facilities needed to better serve our guests.

3. GSDFW: Also, in the circled area no. 3, there are arrows overlayed on the trees. Are these directional arrows? Are the trees under the arrows in the section, intended to be part of the plan? See circled area no. 3 on the plan and the current map of the Fort Worth Botanic Garden.

BOB BYERS: The arrows indicate bioswales that will allow eco-sensitive management of runoff and provide additional space for growing trees as well as a broad range of other plants.  This is all preserved/enhanced green space.

The plan also actually restores quite a bit of the current parking east of the Garden Center back into greenspace, so it’s not just removing natural areas but trying to get them in the most advantageous, and visible, locations.

The design team, which has done a lot of projects all over the world, has stated this is one of the greenest parking lots they’ve ever designed.

Finally, this part of the plan is also preliminary and is intended to allow adjustment to save many of the healthy trees in these areas as possible.

I think an important final thought is that everyone at the Botanic Garden and BRIT is dedicated to the preservation of plants for the future of the planet. But as a public facing, education-based institution there’s a need for balance between providing important access to as many ways to interact with plants as possible and preserving the natural resources necessary to do so.  We’re not there yet and have a lot of work to do, but we’re determined to find that balance before the plan is finalized and make sure the Botanic Garden remains one of the leading places in Fort Worth to interact with nature.

Fort Worth Botanic Garden aims to be 'beacon for conservation'

Butterflies settle in at new Fort Worth exhibit