Lois Gibbs, who led the successful 1970s grassroots campaign against the toxic waste dump known as Love Canal, will be part of a three-day conference hosted by Downwinders at Risk Nov. 5-7. 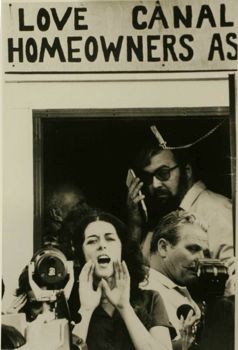 Lois Gibbs, the woman whose campaign to rescue her toxin-laden New York neighborhood jump-started the U.S. environmental movement, comes to North Texas Nov. 5-7. She joins experienced local activists in two days of workshops, training Texans how to better lead action for health, safety and natural resource protection in their communities.

The “Root & Branch Revue 2015” is hosted by Downwinders at Risk, the grassroots group that has worked for clean air in North Texas for 20 years.

While the recent 84th Texas Legislature was working to severely curtail historic city and citizen protections against environmental abuses, activity by grassroots groups have swelled in response. New alliances formed, spin-off groups took on issues, citizens caravanned to the State Capitol to make themselves heard. In one of many far-reaching measures by legislators this term, House Bill 40 revoked key rights of cities to regulate for safe oil and gas operation within their limits. In the budget process, state inspections of drilling sites and pipelines were decimated – after being vaunted as safeguards that made those city protections unnecessary. Funding was denied for 53 of 73 new inspector positions requested by the state regulatory agency itself, the Texas Railroad Commission. In addition, SB 709/ HB 1865 severely restricted citizens’ ability to be heard in the permitting process for industry in their districts, of such environmentally risky operations as chemical plants, cement plants, slaughterhouses, refineries.

Small surprise that the last bastion of public power, the rights to organize, demonstrate, lobby and publicize issues, is getting attention. Attention such as this conference with sessions in “How to Become a More Effective Activist & Organizer.”

Big surprise, though, that Lois Gibbs is on hand for it.

Gibbs, dubbed by Audubon magazine “the Rosa Parks of the environmental movement,” led the successful 1970s peoples’ campaign against the toxic waste dump in her neighborhood of Niagara Falls, New York, famously known as Love Canal.

Residents struggled against opposition at every level, local to federal and eventually won a 1979 judgment for cleanup of the dump and relocation of 833 neighbors from their disease-and birth-defect-plagued neighborhood. Their campaign led to the “Superfund” act of the Environmental Protection Agency that still stands, mandating systems for identification and clean-up of toxic waste sites across the U.S.

The panel that leads off Thursday night tackles “The Future of Fighting Fracking in Texas,” as seen by veterans of national watchdog group Public Citizen and the environmental protection nonprofit Earthworks, as well as Texas “fractivists” and government leaders from four towns in the oil shale.

Tom "Smitty" Smith is one of the veteran Texas activists on hand for a panel discussion on Nov. 5

“She had dialed back her commitment…to (her co-founded) Center for Health, Environment and Justice to address broader...issues” he says. “We invited her not for a keynote speech, but to give two to three workshops …It’s more empowering for people.”

What prompted Downwinders to host the event?

“Being frustrated at no one else doing it,” says Schermbeck. “There are lots of conferences in Texas, all informational…none on how to be more effective at social change.”

“How do you get the best out of your resources to be most effective at causes you believe in?...Without a movement, we wouldn’t have the minimum wage, civil rights,or women’s right to vote.”

“Dallas-Fort Worth is the fourth largest municipal area in the U.S., and the grassroots infrastructure is not as strong as it should be…This will be continuing education for people who are civically involved…we need more of them.”

Why is Texas a critical place for more civic action?

“As Texas goes, so goes the country — our state is a huge actor, population-wise and economically…It’s also the center of the current anti-science, anti-intellectualism that has taken hold of the Republican party…the climate (change) deniers.”

“It’s important to take on the irresponsible approach (that) denies any environmental stewardship…People are tired of the State dragging its feet, its opposition to the EPA, the ‘air pollution is not so important’ attitude…The State is pursuing a policy to nullify federal environmental laws…:”

“We want the federal government to… protect people’s basic rights”

With that in mind, “Root & Branch” includes a Friday noon rally at EPA headquarters and has initiated a meeting with the new EPA Region 6 Administrator, hoping to encourage more forceful EPA action for clean air.

At the 35-year anniversary of Love Canal in 2013, Lois Gibbs was asked what advice she would give to current Love Canal residents, who are experiencing toxic effects horrifically similar to those in the past.

“The lesson we learned here is to turn up the heat,” Gibbs said, quoted in The Buffalo News.

“It was a fight that was won not just locally, but also on the state and federal levels,” the News summed up her response.

“It shows you that democracy works,” she said, “if people get involved.”

Preregistration for the workshop is $35. Admission is $50 day of event. See more at DownwindersAtRisk.org or RootAndBranch2015.org.