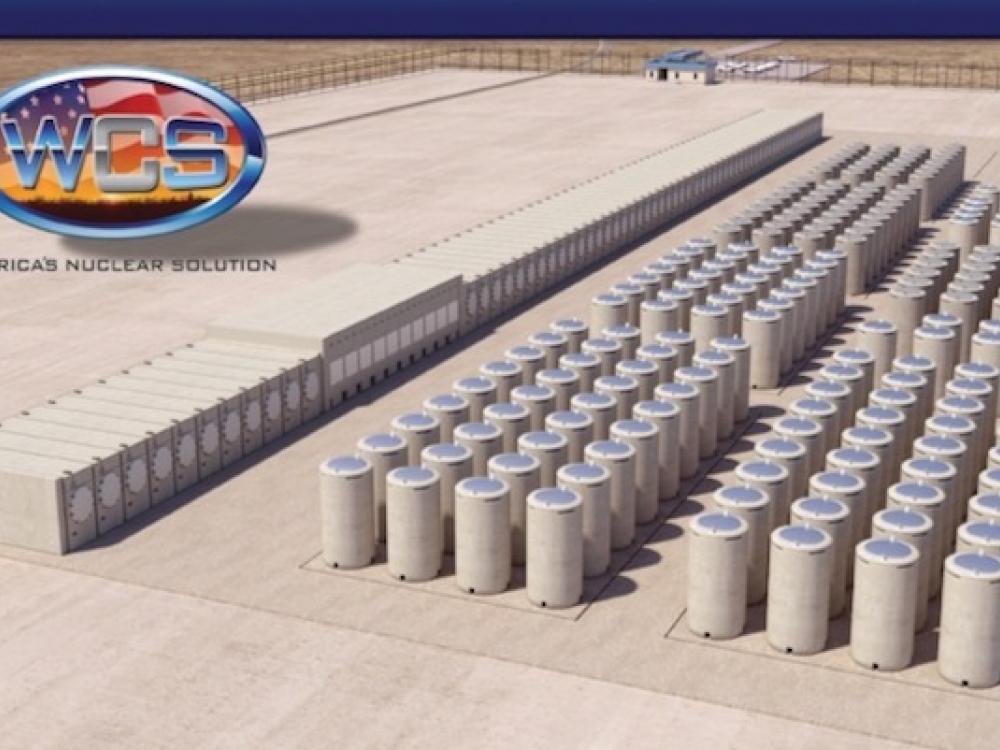 A rendering from Waste Control Specialists shows plans to store highly radioactive waste from nuclear reactors above ground at its West Texas site. Courtesy of WCS.

A national coalition of environmental groups is pushing back against a high-level radioactive waste dump planned in West Texas.

After filing a lawsuit in February, Beyond Nuclear, Don’t Waste Michigan and Sierra Club filed initial briefs at the U.S. Court of Appeals for the District of Columbia Circuit on March 18, challenging the U.S. Nuclear Regulatory Commission’s approval last September for Interim Storage Partners to construct and operate a temporary storage facility for highly radioactive waste at Waste Control Specialists in Andrews County, Texas.

ISP plans to store up to 40,000 metric tons of commercial irradiated nuclear fuel, and highly radioactive Greater-Than-Class-C waste — nearly half the total amount that currently exists in the U.S. Their plan is to store it for 40 years, until a permanent storage site can be located, with an option to extend the license at 20-year intervals.

Karen Hadden, executive director of the Austin-based SEED Coalition, has been battling the planned facility since 2016, when the permit was submitted by IPS, a partnership of Waste Control Specialists and Orano USA, a subsidiary of the France-based global nuclear fuel cycle company.

“The Nuclear Regulatory Commission is ignoring the many serious health and safety risks of hauling deadly nuclear reactor waste across the country and dumping it on Texas,” Hadden told Green Source DFW during the years' long battle against plans for the site.

The City of Fort Worth filed an amicus brief on March 25 in support of the petitioners, citing concerns about the dangers of transportating nuclear waste through the city, home of a large rail transportation center.

To date, the high-level radioactive waste from spent fuel has been stockpiling at the nation’s 95 nuclear reactors at 60 sites, the majority of which are located east of the Miss,issippi River.

The Department of Energy is required by law to locate a permanent underground storage site for high-level radioactive waste. Plans for a permanent disposal site at Yucca Mountain in Nevada have been shelved after fierce political opposition.

“Once it gets there, no one is ever going to want to move this stuff,” said Hadden.

Another cause for concern — ISP's plan to store the canisters above ground on a “parking lot” exposed to extremes of weather.

Specifically, the NWPA prohibits the U.S. Department of Energy from taking title to commercial irradiated nuclear fuel (often euphemistically called spent or used nuclear fuel) at an interim storage site, unless and until a permanent geologic repository is licensed and operating. Despite this legal prohibition, ISP’s license allows for storage of DOE owned waste.

“No federal agency is above the law,” said Mindy Goldstein, director of Emory University’s Turner Environmental Law Clinic in Atlanta, GA, and an attorney for Beyond Nuclear. “On Friday, we filed a brief with the D.C. Circuit Court of Appeals, asking the court to strike down a license issued by the Nuclear Regulatory Commission because it ignored the unambiguous mandates of the Nuclear Waste Policy Act.”

In addition to the violations of the NWPA and APA, this environmental coalition has raised a large number of challenges alleging NRC violations of the National Environmental Policy Act, including inadequate consideration of: transportation risks to and from the CISF; earthquake risks at the CISF due to very nearby oil and natural gas extraction in the Permian Basin; alternatives to the CISF, including Hardened On-Site Storage at nuclear power plants; impacts on threatened species; the risk of extremely long-term, or even de facto permanent, surface storage at the CISF;  and the risk of radiological impacts on the area’s ecology, geology and groundwater, including the adjacent or even underlying Ogallala Aquifer.

This coalition of environmental groups seeks the court to order NRC to re-do the ISP Environmental Impact Statement so that it complies with the legal requirements of NEPA.

“NRC has segmented off the transportation risk issue from the ISP Environmental Impact Statement, a blatant violation of the National Environmental Policy Act,” said Terry Lodge, legal counsel for Don’t Waste Michigan. “The Region of Influence for routine, incident-free shipments is a half-mile on both sides of transport routes, due to hazardous gamma and neutron radiation emissions, while for accidents and attacks that breach the container, it is 50 miles on both sides of the route, due to hazardous radioactive releases,” Lodge said.

“NRC has concealed road, rail, and waterway routes to be used to transport over 3,000 shipments of highly radioactive waste from nuclear power plants across the nation to Texas,” said Michael Keegan, co-chair of Don't Waste Michigan. "These shipments amount to 'Mobile Chernobyls' as potential dirty bombs on wheels. Shipments by barge on the Great Lakes and Hudson River must be excluded. These are for certain mobile X-ray machines that can not be turned off as they pass through countless communities past millions of Americans.”

The States of Texas and New Mexico also oppose the ISP facility.

The same parties opposing the CISF in Texas also oppose Holtec International’s CISF targeted at southeastern New Mexico, just over 40 miles from ISP. NRC will likely approve Holtec’s 173,600 metric ton CISF license by mid-2022. The opposing parties have already filed federal appeals against Holtec's CISF in the D.C., 5th, and 10th Circuit Courts of Appeals. NRC’s approval of the Holtec CISF license would likely prompt the D.C. Circuit Court to regard the case, which has been held in abeyance, as then ripe for active consideration, as well.