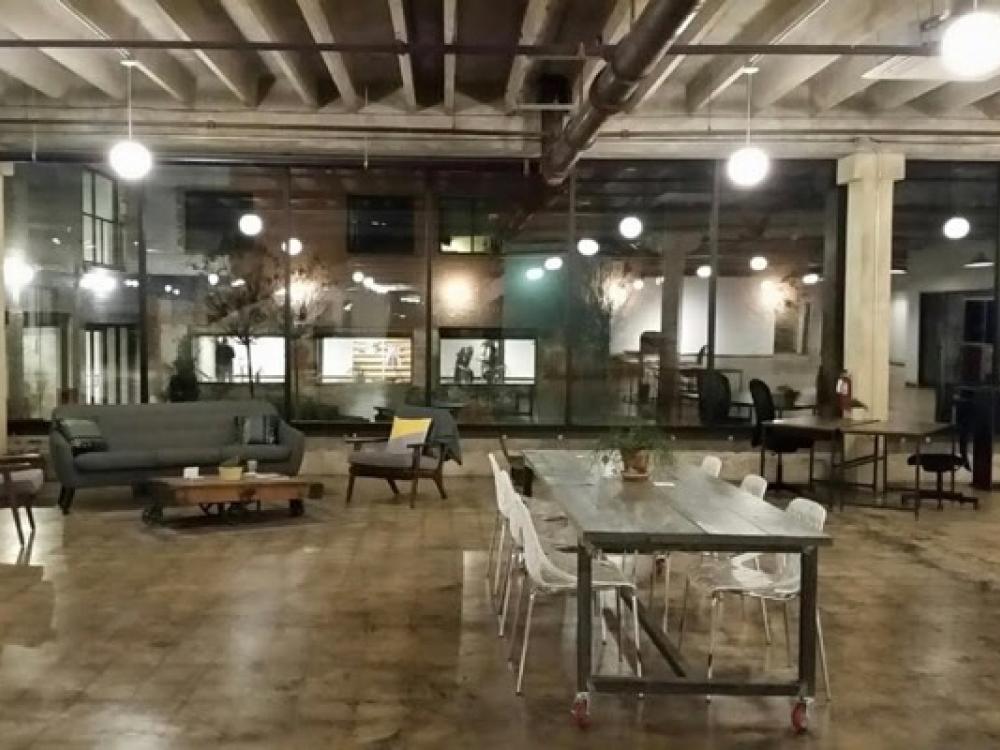 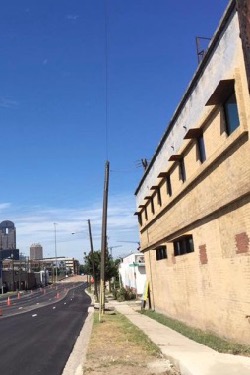 A two-story industrial building a few blocks from the Dallas Farmer’s Market is undergoing a renaissance. The surrounding Cedars District, on the southern edge of downtown Dallas, had its first heyday more than 100 years ago before it was bisected by I-30. But fresh signs of smart growth have sprung up in the past decade, most recently at 1808 S. Good Latimer. The warehouse turned mixed-use, live-work development is the home of GoodWork, poised to become the model for sustainable coworking for North Texas and beyond. 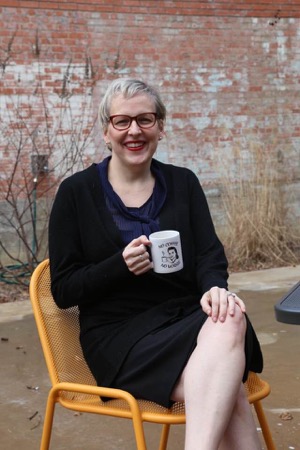 A premier neighborhood in the late 19th century, the Cedars District was once lined with stately Victorian homes for Dallas’ well-to-do Jewish merchant class. (Iconic fashion retailer and Neiman Marcus founder Stanley Marcus was born there.) Today, the creative class is laying its claim and breathing new vitality into this corner of South Dallas with the unfurling of each new development.

Amy King, cofounder of GoodWork, in the building's courtyard. Courtesy of Jennifer Walz.

“Welcome to the Produce District,” said Amy King, co-founder of GoodWork, as she introduced her brainchild to guests at the preview reception for the new social enterprise held last week.

The new district’s name was chosen by King and her crew as a nod to the dozens of produce markets in the area. But “producers” also include small business owners, corporate leaders, cultural creatives, freelancers, nonprofits and anyone else in search of a new way of doing work. With the grand opening of GoodWork, these innovators now have a home base or part-time place to connect with and learn from others. Businesses will gain access to a 24/7 office and meeting space with room to grow.

The emerging world of coworking appeared on my radar seven years ago while I was attending a workshop in San Francisco. The Impact HUB Bay Area embodies some of the best aspects of social impact coworking. Could such a progressive concept ever work in Dallas? 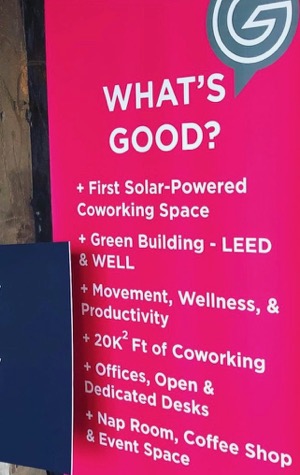 Amy King believed it could and began developing her concept in earnest when she moved to Dallas in 2012. She had discovered the coworking concept while working at the U.S. Green Building Council in D.C., and dreamed of eventually opening her own space. While engaged in brand consulting for Steve Kinder, CEO of LOFTwall and today cofounder of GoodWork, she brought Kinder to the “Global Coworking Unconference” in Austin. There, the idea of launching a space together took root. During this period, King plugged into coworking across the country and became an integral member of these communities, continuing to research and plan what would become GoodWork.

King is a visionary, which makes her a bit of an iconoclast. But her entrepreneurial chops and talent for organizing have enabled her to bring her high-minded vision down to earth, which is essential for enrolling the participants necessary to make such endeavors viable. King is pairing her gift for turning strangers into friends with expertise in green building and organizational development to transform a historical space into the conscious community of GoodWork. 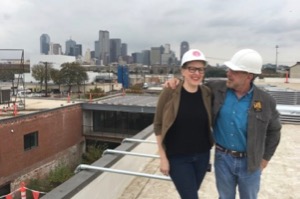 GoodWork cofounder Amy King and Jim Schermbeck, director of Downwinders at Risk, which donated solar panels for the building.

As the primary operating tenant of 1808, GoodWork is the soul of a physical structure designed and renovated by Dallas-based environmental architect Gary Olp, FAIA, LEED Fellow. The building boasts a variety of workspaces and amenities inspired by nature, encouraging movement, wellness, creativity and collaboration.

Solar-powered via Downwinders at Risk’s Sue Pope Fund and a partnership with Sunfinity Solar, the building is also a candidate for LEED Gold certification, with a chance at Platinum given the added benefit of the solar array.

WELL in the Workplace 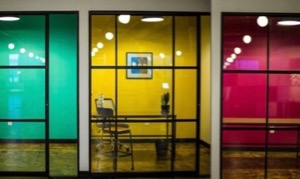 As the GoodWork community takes shape, King hopes to build upon the wellness and sustainability feature with programming in the realm of leadership and business development. Features on the horizon include a nap room, EV charging stations and more sit-stand desks with at-desk fitness opportunities. And, if King and her cohorts have anything to do with it, GoodWork could boast as an added feature a global distinction in WELL certification, a rating system developed for the health and wellbeing of building occupants. 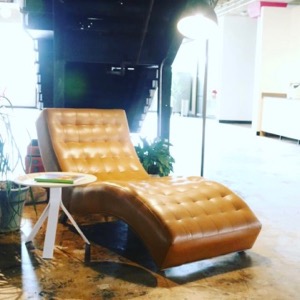 The way WELL projects implemented can vary greatly with different types of businesses. At one downtown office that Loe is working on, employees can workout for free at the building’s fitness center. Meanwhile, GoodWork coworking space encourages fitness by offering regular classes like yoga or area bike tours, and walking meetings through the space. Both workplaces have shower and dressing facilities for when it’s time to get back to work.

“The statistics say that humans spend 90 percent of our time indoors, which means buildings are our habitat,” observed Loe. “And habitat is a good word, as some of the programming seems pretty revolutionary compared to the average static American workplace culture.”

“The statistics say that humans spend 90 percent of our time indoors, which means buildings are our habitat.”

“Creating a healthy environment that supports physical, mental and emotional growth is vital in developing the endurance of strong leaders and the good work that they accomplish,” said GoodWork manager and head catalyst Chelsea Miller. 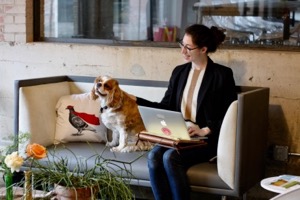 With 35 coworking members signed on, the GoodWork community is already embracing the space's flexibility. As founding member Torre Capistran, owner of Hooked On Code, shared, “We have a dedicated office for when I need quiet to focus, but I love that I can work in the open coworking space too if that’s more conducive to productivity. Having the option to work in a private office or to work amongst the buzz of the GoodWork community is priceless.”

GoodWork manager and head catalyst Chelsea Miller works with help from her pooch. Below, an interior courtyard provides a connection to nature. 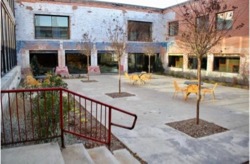 King expects the configuration of working options to be constantly evolving.

“We will continue to solicit regular feedback in order to best serve our community and improve our offerings over time,” noted King. “The proof of concept for this flagship location will be the wellbeing and success of our members.”

"Having the option to work in a private office or to work amongst the buzz of the GoodWork community is priceless.”

GoodWork is a tangible and hopeful reminder that change agents don’t work in a vacuum but in collaboration with those they serve. King and team’s collective endeavor is already making work better for its early adopters, and in their ultimate vision, putting Dallas at the front of the pack in pushing a global movement.

Anna Clark is the Dallas-based author of "Green, American Style: Becoming Earth-Friendly and Reaping the Benefits." She is the founder of EarthPeople Media and the co-founder of the Inclusive Economy Consortium. For more on her writing, visit AnnaMClark.com. Contact her at [email protected]