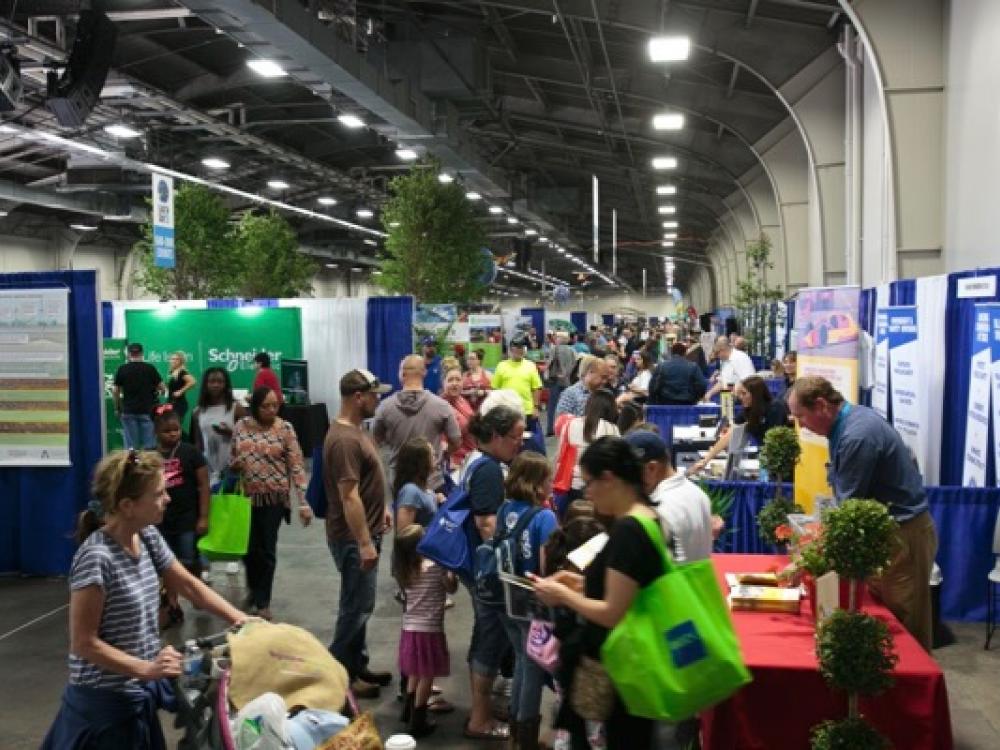 Now in its 8th year, the three-day environmental expo also features five days of conferences and a 10-day film festival.

EarthX changed its name last year from Earth Day Texas to reflect its ambitions to grow. This year, event-goers will experience that growth as the three-day festival now is held in conjunction with a five-day group of conferences and 10-day film festival.

With a mission to connect the global community to create a sustainable world, the Texas-based nonprofit hosts what is likely the world’s largest environmental expo, conference and film festival from April 13-22, 2018, at locations throughout Dallas.

Founded in 2011 by Dallas-based environmentalist and businessman Trammell S. Crow, Earthx, originally began as Earth Day Dallas, an outdoor event spanning five blocks of Flora Street in the Dallas Arts District. It has grown to occupy approximately a half million square feet of indoor and outdoor event space in Dallas’ historic Fair Park. In 2017, the event drew 116,000 attendees, 800 exhibitors and more than 250 speakers. Approximately 1,200 volunteers will be needed to put on the massive event this year. Visit earthx.org to register for the 2018 event and receive free admission.

“While we didn’t come up with the initial idea of a pro-business Earth Day, we ran with it and grew it into the world’s largest gathering of its kind,” said Trammell S. Crow, founder of EarthX. “International environmentalists, elected officials, investors, business leaders, educators and families are coming to Earthx in Dallas for an array of conservation-focused offerings, exhibits, films and conferences, where Earth is our common ground.”

Earthx features five days of conferences from April 18-22. E-Capital Summit will convene mission-driven investors, incubators, accelerators, researchers and breakthrough clean technology innovators from around the world to form partnerships having substantial, positive impacts on profits, people and the planet. EarthxHack, a 24-hour event, is the world's largest environmental hackathon, sitting at the intersection of innovation, technology and the environment. The platform will create groundbreaking solutions by utilizing the brightest technical minds of today focusing on the problems of tomorrow. New for 2018, EarthxSolar will bring together change-makers in the business world and in solar energy. Other conferences, including EarthxOcean, EarthxResponsibleOilandGas, EarthxBridge Summit and EarthxPolicy: Energy Done Right, will encompass educational, municipal and environmental efforts.

Exhibitors of EarthxExpo, taking place at Fair Park April 20-22, include The National Audubon Society, Greenpeace, and The Plastic Soup Foundation, a nonprofit focused on reducing ocean plastic from Amsterdam, NL. EarthX has partnered with Trees for the Future to plant as many trees as possible in five African countries during the expo as well as with The Great Seed Bomb and city of Dallas for the weekend-long Seed Bomb Blowout to help increase vital pollinator habitat here at home. In addition, Oncor will showcase the new Nissan Leaf with examples of EV charging stations, UPS is bringing its interactive education trailer on alternative fuel transportation, and TxDOT’s Don’t Mess with Texas Program offers an interactive virtual reality game about litter prevention.

EarthxExpo attendees can experience a wide range of educational and interactive activities for the whole family during the three-day event. There is plenty to do and see focused on sustainability and green living, from an Outdoor Adventure Zone featuring scuba diving to tree climbing and goat yoga to exploring a Tiny House Village or enjoying the Eco Auto Show, E-Bike track and science education trucks. An Interactive Zone with more than 25 virtual and mixed reality experiences offers immersive content and equipment from Samsung, Google Daydream, Dell, Conservation International and National Geographic, amongst many others.

Prior to the launch of the expo and conferences, EarthxFilm commenced on April 13 and runs through April 22. EarthxFilm uses the power of film and emerging media to raise awareness of global environmental issues. Over 10 days, EarthxFilm will present over 60 features and shorts at screenings and events across the city. EarthxFilm’s educational components include Youth Online Filmmaking Competitions (open now), in-school screenings and hands-on workshops at EarthX. An EarthxFilm Awards Ceremony will be held on the last day of the festival, Sunday, April 22.

On Friday, April 20, EarthxGlobalGala will be a star-studded evening event that honors visionary leaders in environmental education, film and television. The Global Impact Awards will be given during this fascinating, fun and interactive night at the Perot Museum of Science and Technology.

About: Likely, the world's largest environmental expo, the event was founded by Trammel Crow in 2011. Today it features 800 exhibitors and 250 speakers, along with conferences, an awards gala and a 10-day film fest.

Where: Fair Park in Dallas and other venues.