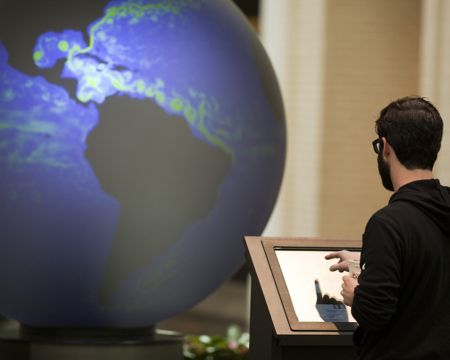 Visitors to NorthPark Center and Earth Day Texas can check out the latest high-tech version of the traditional desk globe this month.

In honor of Earth Day, Earth Day Texas will have their 60-inch OmniGlobe on display at NorthPark Center in Dallas until April 24. Event-goers can also see it, along with a 32-inch version, at Earth Day Texas April 26-27 at Fair Park in Dallas.

The dynamic digital sphere is designed to wow onlookers with 180 animations, showing geophysical and meteorological data, along with illustrations on climate, ecology, demographics and geopolitics.

Indeed, the OmniGlobe means to do just that. 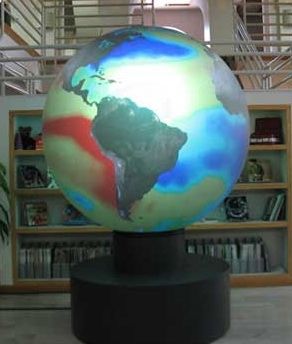 Controlled by a touch-screen digital kiosk, the globe lets users choose the animations they want to view with just a swipe of the finger.

“Trammell S. Crow personally picked out the animations for the OmniGlobe,” said Cain, referring to the Earth Day Texas founder. ”It is hard to say what will be most popular, because there is something for everyone. One of the best parts about this technology is that it's very flexible. We can update it with new animations as the world continues to change around us.”

“The OmniGlobe can display animated and static images that show how the continental plates shifted our world from Pangea to the seven continents we know today,” Cain explains. “It can display the weather patterns that led to Hurricane Katrina, transform into different planets, constellations and even the Death Star. It's very versatile and a lot of fun.”

The OmniGlobe installation is expected to generate excitement at both NorthPark Center and Earth Day Texas, says Cain. 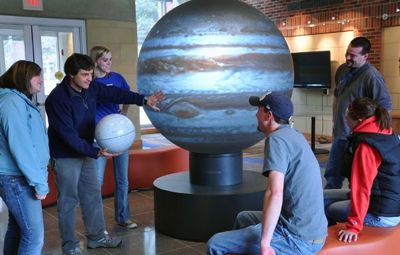 “The OmniGlobe is part of Earth Day Texas’s year-round effort to engage children and adults in understanding the world around us,” said Cain.

Left, students at the University of Montana get a new perspective on the solar system. Courtesy of ARC Science Simulations.

After its stint at NorthPark Center and followed by the two days at Earth Day Texas, OmniGlobe will then do a round at schools and organizations throughout the state to educate and engage people about the world.

Cain says they hope visitors to the OmniGlobe will get a new perspective on the environment.

“For us, success is when someone comes to Earth Day Texas and learns something new, something they can take home and incorporate into their work and personal lives.”