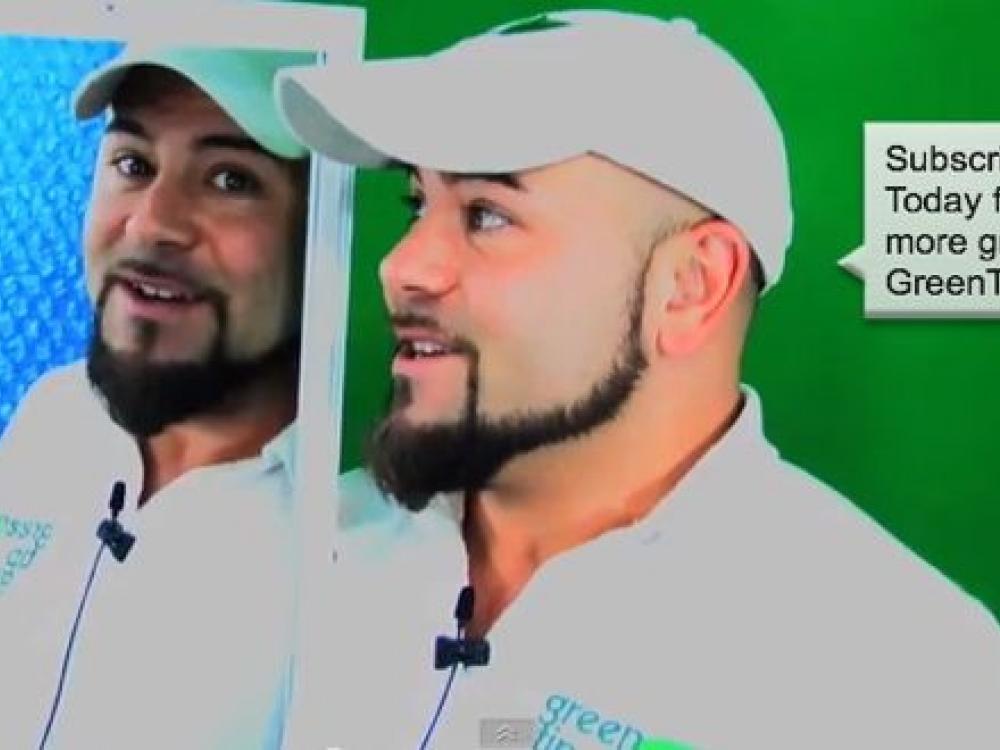 By day, Duncanville resident Jason Winningham sits behind a desk catering to clients at a Dallas commercial real estate office, but after hours, he dons a cap and T-shirt emblazoned with a leaf, transforming into “The Green Tip Guy.”

Winningham took on the role of local sustainability superhero about two and half years ago after he began making eco-friendly changes in his life. He was also learning more about the global environmental challenges and started sharing what he learned with friends and family through email blasts.

“My friend said ‘You should start putting these together and share it with a wider audience.’”

Meanwhile, he joined his company’s green team, which promoted sustainability in the office. Soon he was sharing his weekly green emails with his coworkers and clients as well.

At first, he was posting just environmental facts and statistics.

Then he developed his Green Tip of the Week series. Using a hand-held camera, he filmed, directed and starred in his low-budget videos.

Over the last two years, he’s filmed more than 200 episodes, covering everything from repurposing your coffee grounds to building an underground pet house. He also does mini reviews on eco-friendly products.

“It’s really all about the small changes that we make,” he said. “Like a lot of people, I don't have the money to get solar panels and a wind generator. It’s the little steps that help us make big progress over time.”

So far, he's attracted more than 1,000 Twitter followers and 300 Facebook fans. He said he’s been surprised at how often people don't know about some of the subjects he’s covered, such as diatomaceous earth, which is used as a natural pest repellent.

For subject matter, he follows his own curiosity and has debunked one urban myth.

He’d always cut up the plastic rings that come around six-packs of beverages because they can end up injuring wildlife who get entangled in them.

However, he had some friends tell him that was no longer needed as the rings were now made with a biodegradable material.

He was skeptical so he conducted his own research.

“I took 100 rings and left them out for an entire year in the sun,” he said. “About 2 percent did what they were supposed to.”

Left, Winningham and an Earth Day Texas exhibitor promote the importance of cutting up six-pack rings.

While some of his topics, such as rain barrels and composting, may be familiar to the environmentally savvy, Winningham has covered some very original ground.

For example, he decided to break old stereotypes and tackle a subject that is still taboo in mixed company. He promoted the Mooncup, the reusable cups designed to curb feminine product waste. It was a hit on social media.

“For a few minutes, it created a lot of buzz on Twitter. People said it was refreshing to hear a man talk about it,” he said.

Winningham said he’s come along way since he was just another urban city dweller living in downtown Dallas to becoming a self-described "suburban quasi-farmer" in Duncanvillle, where he grows tomatoes, basil, blueberries and avocados.

“It’s not like I started off in some eco village,” he said. “The [Green Tips] are all about my journey.”

Look for the Green Tip Guy’s Green Tip of the Week on GreenSource DFW.org. Or check out his website GreenTipOfTheWeek.com and his YouTube page, where you can find an archive of his green tips.