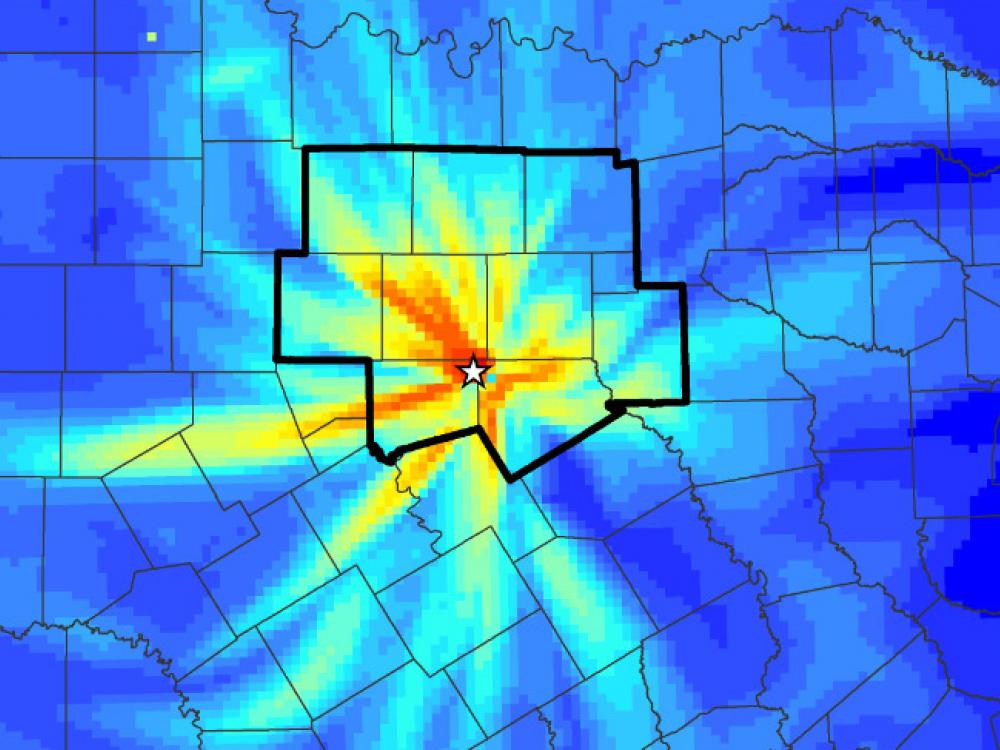 From Downwinders at Risk

Using the school’s banks of supercomputers, engineers at the University of North Texas replicated the massive computer model being used by the Texas Commission on Environmental Quality to write the region’s new clean air plan. They then used the model to test the effects on local ozone when pollution levels were reduced from aging coal plants in East and Southeast Texas, the three cement plants in Midlothian and oil and gas facilities in the Barnett Shale and elsewhere – tests the state agency had not done on its own model in almost a decade.

They found such reductions, mimicking the effects of modern pollution controls, would propel North Texas into compliance with the current smog standard and decrease smog significantly around the region. It’s the first time anyone outside of Austin or the TCEQ has had access or control over a region’s “non-attainment “ modeling.

Read about the Downwinder UNT Study
in Dallas Morning News.

Look at the effects of reductions in pollution from the East Texas Coal Plants, Midlothian cement plants and North Texas Oil and Gas facilities from the study itself:

Then take 30 seconds and please

sign the petition for a real air plan from EPA,

and then another thirty seconds to

send e-mails to the Director and regional chief of EPA asking the same thing.

Your air needs your help. Please. Thanks.

Accompanying the release of the UNT work was another unprecedented effort by Dr. Robert Haley of the Texas Medical Society using EPA “benefit mapping” software to estimate public health benefits of cutting smog levels by at least five parts per billion. Complying with the current standard in DFW would require a decrease of more than 8 parts per billion from 2015 levels.

Haley found a five part per billion decrease would have large medical and economic consequences, including preventing over 75 deaths, 350 Emergency Room Visits, 160 hospital admissions, and 120,000 lost school days in the 10-county DFW nonattainment area annually, totaling over half a billion dollars in medical care costs and lost productivity.

“Together, these studies provide a powerful rebuke to the state’s inaction on dirty air in DFW,” said Jim Schermbeck, Director of Downwinders at Risk, the 21-year old clean air group that financed the UNT effort. “Using the data from these two studies, it’s clear reducing pollution from these major sources, especially the coal plants, would have a large and beneficial impact on North Texas public health, and save the local economy millions of dollars.“

Frustrated by over two decades of official state modeling that has predicted success but delivered five failed air plans in a row, Schermbeck said his group wanted a second opinion going into a new round of planning, as well as an opportunity to look at different control strategies TCEQ refused to examine.

In the past, such an undertaking would have cost millions. But the price of computing has come down to such an extent that even huge, complicated tasks like modeling the DFW airshed can be performed for a fraction of what they once cost.

Downwinders wrote grants for the project and assembled $120,000 in financing from local DFW sources including the Harold Simmons Foundation, Trammell S. Crow, Garrett Boone and the Dallas Foundation.

Dr. Kuruvilla John, Associate Dean of Research and Graduate Studies, Professor of Mechanical and Energy Engineering, College of Engineering at UNT, was chosen because of his accessibility, lower transportation costs and past collaborations with the TCEQ. Dr. John reported to a committee of current and former officials, chaired by former Dallas County Judge Margaret Keliher, and including Dallas County Commissioner Theresa Daniel and Dallas City Councilwoman Sandy Greyson.

Schermbeck noted Dr. John built a duplicate of the Texas Commission on Environmental Quality’s computer model used to design a new DFW clean air plan. All the variables used in the model are the state's, including the meteorology and the projected emissions of pollution from all categories of sources. None of the information used in the model originated with Downwinders at Risk or the UNT engineers. In fact Dr. John benefited from TCEQ’s technical assistance in completing his duplicate and previewed the results to TCEQ officials in September.

In all, UNT ran at least 15 different scenarios through the TCEQ model that examined the impacts of reductions of smog-forming pollution from individual sources, as well as combinations of reductions. Among the most significant findings:

“How would a reduction in NOx emissions from utility electric generators in just the counties closest to the eastern and southern boundaries of the DFW area impact the DFW area?”

As has been noted, UNT found reductions in smog-forming pollution from these coal plants have a profound impact on DFW smog levels. UNT’s study now becomes a source of information about the state’s plan for the EPA when the state itself can’t, or won’t, provide it

6. The results of this study directly contradict statements made in the Texas Commission on Environmental Quality’s most recent DFW air plan. For example,

"…the impact of the suggested NOX controls on East Texas EGUs is not expected to have a substantive impact on Denton Airport South monitor in the DFW area.”

In fact, UNT’s results show removing 90 percent of the coal plants’ NOx would reduce ozone by as much as 4. 5 parts per billion at the Denton monitor and bring the monitor’s annual average down below the current required standard of 75 ppb.

DFW has been in continual violation of the Clean Air Act for almost 25 years because of its chronic smog problem. Despite state and industry claims that air quality is getting substantially better, progress has stagnated over the past five years. In 2010, the regional smog average was 86 ppb. Today, it’s 83.

Critics of the state, such as Schermbeck, note this lack of progress corresponds to anemic air plans proposed by Austin, which never include new controls on any major polluters. Schermbeck says the UNT study provides a technical justification for now including those controls, if not to the state, which he discounts as an “unserious participant,” at least to the EPA and local officials. It’s this unprecedented breaking-up of the state’s monopoly on the technical expertise upon which the entire local air quality planning process relies that Schermbeck thinks is as important as the results themselves.

“Up to now, if the state didn’t want to look at a control measure, it didn’t get looked at,” said Schermbeck. “If the state said a new technology wouldn’t do any good, you just had to take their word for it.  But if a local grassroots group can scrape-up enough funding to provide a viable alternative, there’s no excuse for DFW officials to be completely dependent on the state anymore.”

Downwinders and other clean air advocates are already using both studies to argue on behalf of a Dallas County Commissioners Court resolution coming up for a vote this Tuesday, Oct. 20. Sponsored by Commissioner Daniel, it urges the judge hearing the EFH bankruptcy case to require modern controls on Luminant’s three East Texas coal plants as a condition of their sale.

Schermbeck also predicted the UNT study would have a very large impact on how the current DFW air plan would be drafted, and even its chances of being approved by EPA. “UNT’s use of TCEQ’s own model to quantify the effects of off-the-shelf control technologies provides answers to questions EPA already had about the plan, but which TCEQ seems reluctant to respond. Because there’s another set of hands on the model that can produce those answers, TCEQ has significantly less wiggle room to rationalize why they aren’t requiring the controls their own data shows are effective at reducing smog.”

It’s also likely the UNT results will be used in an effort to tie the East Texas coal plants to the fate of the DFW nonattainment area under the new 70 ppb ozone standard. “It’s unfair and bad public policy for those plants to have such a huge impact on our air quality but be untouched by our area’s anti-pollution measures,” said Schermbeck, whose group successfully petitioned the EPA to bring Ellis County and the Midlothian cement plants into the DFW nonattainment area over a decade ago.

Schermbeck looks at both studies as evidence of a trend toward greater democratization in policy-making because of grassroots access to heretofore prohibitive resources. “Both of these studies show the ability of new technology to empower groups that were previously at the mercy of Big Government or Big Industry. When citizens have new tools, things change.”

More Information on the UNT study can be found at: www.dfwozone study.org.

Jim Schermbeck is the director of Downwinders at Risk, an air quality watchdog group, based in Dallas-Fort Worth. Contact him at [email protected]