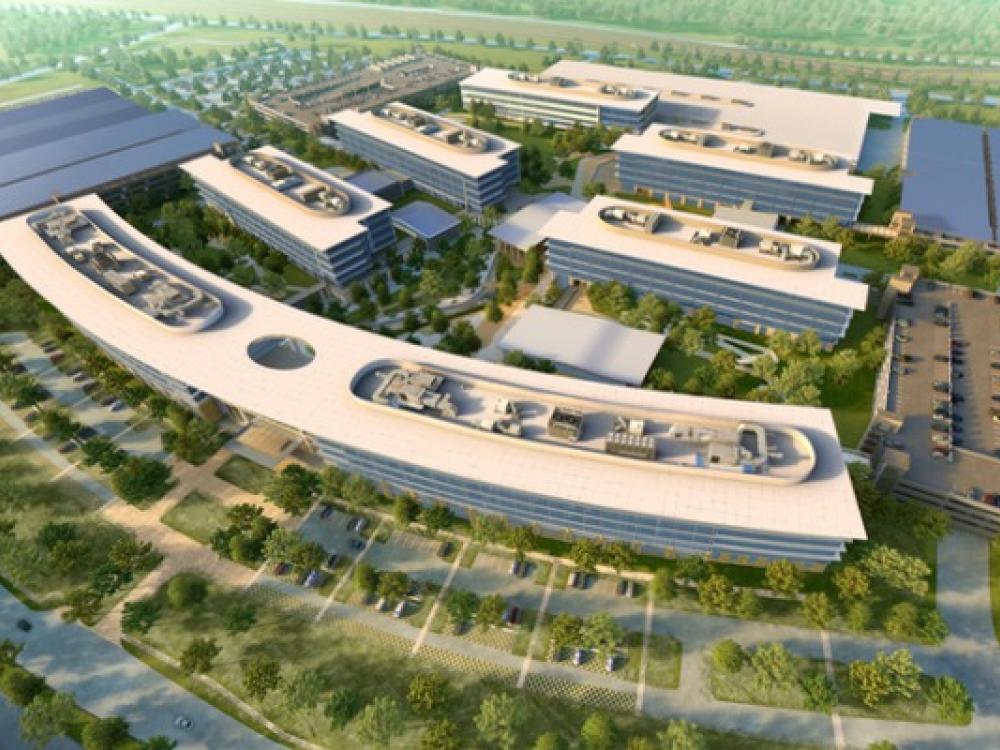 Toyota is installing a 7.75 Megawatt solar installation at its new headquarters in Plano set to be completed in 2017. Courtesy of Toyota.

Toyota’s giant rooftop solar installation in Plano, on target to be the largest non-utility solar array in Texas, will shine a light on a technology that’s growing and well-suited to North Texas, but has been a little slower to catch on here.

So far in Texas, the Hill Country has harnessed the most sun, with Austin and San Antonio’s energy companies building the state’s biggest utility solar projects, and the same two cities serving as home to many companies with their own rooftop solar.

Texas lags behind solar leaders such as California and Arizona, ranking 10th nationally in installed solar capacity installed (though it leads the nation in wind capacity thanks to extensive wind farms West Texas).

However, the Lone Star state is on track to become a solar star over the next five years. It is expected to move into second place among states in solar capacity by 2020, according to the Solar Energy Industries Association. The industry group anticipates that Texas will have installed more than 4,500 megawatts of sun power by that time, up from just 534 megawatts currently. The leap will be fueled mainly by the lower cost of solar power, which has made it competitive with other electricity sources, as well as continued tax incentives for solar development.

Solar advocates also believe states will continue to turn to solar to stabilize the grid against the inevitable rise of fossil fuel-generated electricity. At the moment, though, with prices remaining low for natural gas, solar’s main fossil fuel competitor, this hasn’t been the motivator solar companies had hoped.

Set to be completed by late 2017, the solar installation already is inspiring other manufacturers to consider how solar power can curb carbon emissions and electricity bills, said Butt, who helps oversee sustainability efforts at Toyota. The auto manufacturer is bringing its new North American headquarters and an estimated 4,000 employees to Texas from California.

“There’s been a great buzz from the technical standpoint from other manufacturers who want to know why we’ve done this and how we’ve done this,” Butt said.

Mostly, they want to know why. What Butt tells them is that the solar-topped carports, along with multiple other energy efficiency measures, are a must-do if Toyota is to reach its goal of reducing its carbon impact to zero by 2050.

“There’s been a great buzz from the technical standpoint from other manufacturers who want to know why we’ve done this and how we’ve done this,” Butt said.

Toyota wants its cars, as well as its offices and plants, to be carbon neutral or even better, by that time, to combat climate change and air pollution. To get there, Toyota will have to be creative, Butt said. The company will be using solar power, which is already installed at several other Toyota facilities in the U.S., as well as wind power, where it works. It will make its buildings energy tight and continue to develop cars that run on electricity and/or hydrogen fuel cells, he said.

The new corporate campus in Plano will employ a variety of means and systems to save energy and lessen its impact on the environment. The facility aims to achieve a LEED certification of Platinum, the highest level, by using energy efficient heating and cooling systems, windows and overhangs that deflect thermal heat and native landscaping that reduces water use, Butt said. In addition, construction waste will be mostly recycled.

The solar installations atop the three parking carports will be key to reducing the headquarters’ reliance on the grid, generating about 25 percent of the electricity used by the corporate campus.

The solar rooftops will do triple duty, Butt explained, generating power, shading cars and also protecting them from hail.

The PV panels, produced by SunPower are the most efficient available today, according to the manufacturer. The installations will be positioned at a slight tilt to feed rainwater for irrigation into a central cistern, Butt said, though watering needs will be minimal because of the native plants being used.

All this effort to curb carbon emissions – the solar installation alone is estimated to save 7,122 tons of CO2 annually – has been noticed.

In addition to the manufacturers who’ve inquired about Toyota’s plans, Butt said he has heard from a pharmaceutical company that wanted more information on the solar installation and from environmental NGOs that called to congratulate Toyota for making a big impact with green energy. (The carbon dioxide emissions savings from the solar rooftops will be equivalent to what 1,000 homes would produce in a year.)

Toyota’s plans, along with the enactment of a new Texas law that makes financing commercial solar easier for businesses, are priming North Texas for more commercial solar growth, said Howe, who serves on the board of the non-profit educational Texas Solar Energy Society.

North Texas already has some notable solar installations: Home furnishings retailer IKEA installed a 912 kilowatt system in 2012 atop its store in Frisco, part of that company’s plan to equip all its stores with solar roofs. In late 2014, Federal Express went online with a 1.4 megawatt system at its facility in Lancaster. The FedEx installation is the largest non-utility rooftop solar array in North Texas, until Toyota’s goes online.

Fed Ex flipped the switch on a large solar installation at its facility south of Dallas in 2014. Courtesy of Fed Ex.

The other factor that Howe says is boosting local solar projects is Texas’ recent law allowing PACE financing for solar. PACE (Property Assessed Clean Energy) helps businesses come up with the initial cash outlay for solar installations by allowing them to take out long-term loans that are tied to the property. So if an owner sells the property before a solar roof is paid off, the payments transfer to the new owner. This provides the initial investors with an assurance that they won’t be saddled with payments beyond their ownership of the project.

PACE also can be used for high efficiency HVAC units, greywater systems and other energy-saving technologies.

In the case of solar power, a PACE-financed project might reward its owner with enough of a reduction in electricity costs to cover the expense of adding the PV panels, Howe explained.

And in certain businesses, such as apartment rentals, the PACE program can provide a landlord with additional incentives to install solar, by turning the payments on the project into a tax-deductible operational cost, he said.

Until PACE became available, landlords of multi-family properties had little incentive to improve energy efficiency because tenants typically pay electricity bills. But PACE financing, with its tax benefits, changes that, he said.

The city of Dallas recently approved PACE financing, joining Travis, Williamson, Cameron and Willacy counties, which also have given their local approval (local governments must activate PACE in their area).

PACE alone should accelerate solar adoption in North Texas, Howe said. And with the added demonstration of concern for the environment exhibited by Toyota, solar should get an even bigger boost.

It will bring attention to solar as a clean energy option, something the DFW area hasn’t always been attuned to, Howe said, perhaps because it doesn’t host any coal plants (which have visible greenhouse gas emissions) and has been more focused on wind power, which is available on the grid to commercial and residential customers.

Cities in North Texas, and across the state, have become big wind users. Dallas and Houston top the list of top government users of green power, mainly because of wind power.

Howe, predicts that solar, which has come down in price steadily in recent years, will follow a similar successful path as wind, becoming a major clean energy force in the state.

But with a significant difference. While wind works best at utility scale, with tall towers needed to capture the breezes, solar is more adaptable.

“You can put it on your homes or businesses. It’s a difficult thing to do with wind, you need towers and we don’t have as much wind in this part of the state,” Howe said. “But with solar, you can generate it where you consume it, and that’s got lots of advantages.”