The North Texas Clean Air Network was unanimously approved by Dallas City Council’s Quality of Life Committee to go to the full Council for consideration in December. Images courtesy of DFW ARC.

The North Texas Clean Air Network was unanimously approved by Dallas City Council’s Quality of Life Committee to go to the full Council for consideration Dec. 12. QoL will brief Council on Dec. 5.

This is a big step forward for North Texas CAN’s sponsors, the DFW Air Research Consortium, comprised of some dozen area universities, governments and citizen groups, and its leaders, UT Dallas atmospheric physicist Dr. David Lary and Jim Schermbeck, director of the clean-air group Downwinders at Risk. The grassroots partnership is a finalist for the upcoming Green Source DFW Sustainable Leadership Awards.

Why is an air monitoring network needed in Dallas? Schermbeck laid this out to attentive council members.

“The air we breathe is one of the most overlooked pathways for toxins into the body,” said Schermbeck.

We breathe without any idea what’s in the air, without knowing its contents, unlike food we eat or the city water we drink, he said.

“The federal air monitoring system here wasn’t designed to address public health,” he stated.  “Of the 20 EPA monitors, fewer than 10 are inside the urban area.”

He pointed out that, in Dallas County, there is only one monitor for particulate matter of the most hazardous kind, PM 2.5.

“When people tell you we’re in attainment [with federal standards] for PM 2.5 in Dallas, what they are really telling you is, that the air for 2,000 to 5,000 square feet around the monitor site is in attainment. It doesn’t tell you anything about air quality in West Dallas” or anywhere else, because these particles don’t spread as a gas does.

“Dallas needs many, many hundreds of air monitors,” he said. 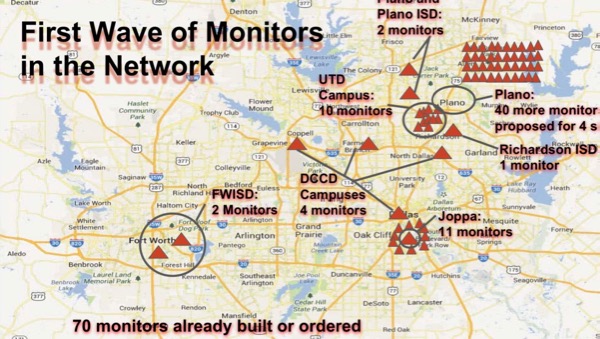 A map provided by the DFW Air Research Consortium shows its plan to add air monitors across the region.

Cities around the world and in the U.S. are investing in air monitoring networks. The briefing room screen displayed an aerial map of Taiwan, downwind from China’s heavy industrial pollution. The map showed thousands of multicolored air monitor symbols and their real-time readings on a smartphone app. Schermbeck said that “unexpected places like Maryland, Kentucky, Minnesota and Kansas as well as Chicago, Seattle, Baltimore and LA, have hundreds and hundreds of monitors.”

Small PM monitors are now “at the intersection of low cost and accuracy,” he added, and can be calibrated close to, if not at EPA standards, though they are not yet EPA-certified.

Health effects of PM are critical to DFW ARC’s focus.

“It’s not only what PM can do to your lungs and heart, strokes, it’s what they can do to the brain that has gotten attention in the past 10 years. Parkinson’s disease, dementia, autism - children born next to freeways are born with higher incidence of autism…” 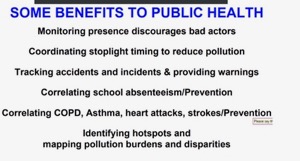 He noted that the city of Plano is in the first wave of the area’s adopters of PM monitoring.

“They received two of our first 10 air monitors free and are buying 40 more.”

“It is a great opportunity to have an internationally recognized research university engaged in this effort,” said Schermbeck.

Lary said the technology that they are sharing is part of a much larger project.

“Any resources requested [from Dallas] are only for hardware to put in place, and they leverage a massive investment. The U. S. Army came to us [UTD], and requested that we assist with [research on] the physical and cognitive effects of pollution, research going on in Dallas, for $500 million.”

“Dallas needs many, many hundreds of air monitors.” - Jim Schermbeck, Downwinders at Risk

“Special Forces requested a similar thing and, in fact, the EPA invited us to present at a conference. The chief scientist commented that what we’re trying to do with these low-cost air monitors, ‘is way beyond anything we can imagine.’”

“We’ve been passionately following this for 30 years, with a lot of sweat, because we strongly believe in the public good.”

“Our consortium has been working with multiple school districts for many years, and with Dallas Community College District.”

“The deliverable we want to give is free, open data from all these low-cost sensors. These will be carefully calibrated pre-deployment, and calibrated in the field by co-location with EPA monitors. We will also be comparing each monitor with its neighbors. This is a system I developed at NASA.”

UTD is putting up the whole data system, and students are involved in this as part of their education, as well as building the sensors.

“So it’s public accessibility, transparency, a lot of collaboration with multiple community groups, governments and citizens,” continued Lary. “All of this can be replicable.”