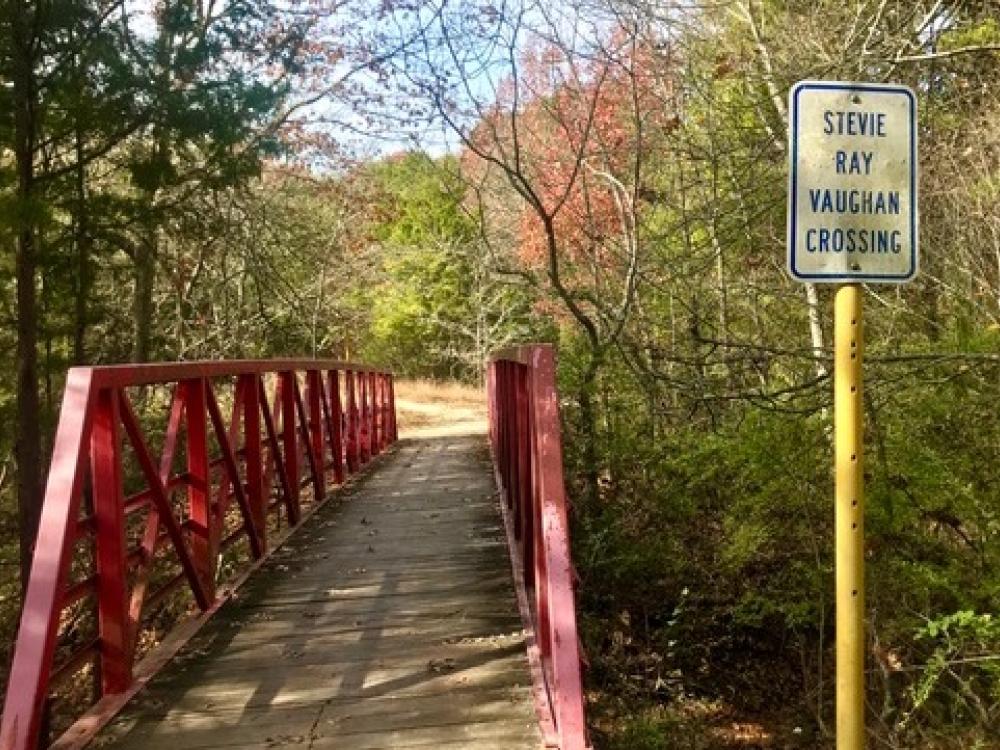 The Stevie Ray Vaughan Crossing bridge at Windmill Hill Preserve was funded by the late musician's mother, Martha. The nature preserve became the mission of Paul Dryer, a fellow musician, after a housing development failed.​ Photo by Amy Martin.

Windmill Hill has never had a windmill that anyone can remember. 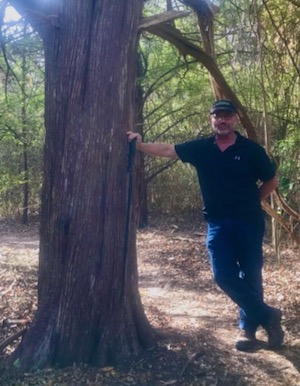 Paul S. Dryer grew up in DeSoto and rode bikes on the local landmark, careening down its steep slopes after farm and ranch operations ceased.

WIndmill Hill Preserve has been the project of DeSoto resident Paul Dryer for more than 30 years. Photo by Amy Martin.

In 1986, he and his wife Lisa bought a house on the hilltop in Windmill Hill Estates and raised two daughters. The television was rarely on. The girls stayed busy exploring the thickly wooded acreage behind their home.

As we stand next to his house on a bright December day, he looks out into a small open field behind it and recalls, his voice breaking with sad frustration.

"The street here was supposed to be cut all the way through. I sat here on my patio and watched beautiful mature pecan trees get pushed over."

It was the 1980s, a time of junk bonds and rampant real estate speculation that came crashing down in the savings and loan fiasco. Impending construction for the planned one-acre estate homes ceased when the developer went bankrupt.

The federally funded Resolution Trust Corporation purchased many failed developments and put them up for auction.

Mary Phinney — administrator of Dallas County Open Space's Trails and Preserves Program from 1988 to 2010 — got wind of the 75 wooded acres. In 1993, the county bought the land and named it Windmill Hill Preserve. 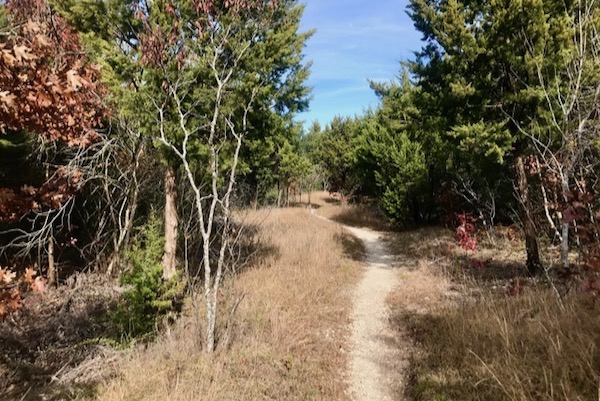 A PRESERVE IS BORN

"Then it kind of ended up as my project," says Dryer.

Somehow out of this rough, raw acreage, long subjected to illegal dumping, he willed a nature preserve into being.

All of it had to go. Working closely with Dallas County and the city of DeSoto, Dryer got to work.

With only faint whispers of old ranch roads and corridors cleared for the failed development's streets, Dryer located the illegal dumps while braving extensive poison ivy. For 30 years, he marshaled community involvement to augment his working over an hour a day on the preserve, aided by his family's efforts.

"It's been a long ride," says Dryer, now 66, a financial services professional with a life-long passion as a musician.

For his decades of effort on behalf of the land, on Tuesday, Jan, 11, the Dallas County Commissioners Court will vote on a proposal to rename it the Paul S. Dryer Nature Preserve.

IN MEMORY OF STEVIE RAY VAUGHAN 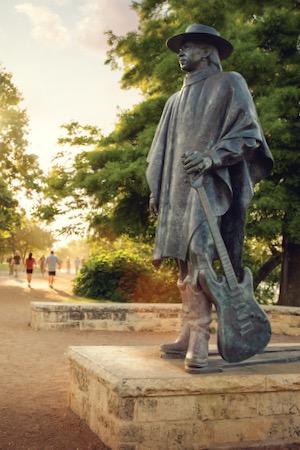 Dryer and I wander the rocky trails that lace Windmill Hill Preserve. Its deeply forested ravines range from gentle to steep, carved through limestone by wet-weather creeks. Close to the water corridors tower green ash, American elm, black walnuts and various red oaks, along with pecans, many planted by the original farmer.

Dallas native Stevie Ray Vaughan has been memoralized in other Texas cities. A statue was installed at Lady Bird Lake in Austin in 1993. In 2020, a Vaughan Brothers Memorial was dedicated in Kiest Park in Oak Cliff, where the brothers grew up. Photo courtesy of Visit Austin.

Bright sunlight filters through the bare tree branches, busy with the flitting of Carolina chickadees and a plethora of sparrows, plus the occasional bright red pop of a northern cardinal. A game trail, a low tunnel carved by raccoons, coyotes and other woodland mammals through profuse Chinese privet, catches our attention.

We arrive at the preserve's core passage: the Stevie Ray Vaughan Trail, or the SRV as it's known, named for the world famous guitar player from Oak Cliff who died in a helicopter crash in 1990. During his days in the Oak Cliff rock scene, Dryer often crossed paths with the legendary blues guitarist and his family. Coincidentally, Phinney, former administrator of Dallas County Open Space's Trails and Preserves Program, is the niece of Vaughan's mother, Martha.

Erosion exacerbated by stormwater sheeting off an adjoining development caused a drainage channel to deepen and turn the SRV impassable. Martha Vaughan donated $10,000 to DeSoto to construct the steel bridge and designate it as the Stevie Ray Vaughan Crossing, which ends the paved ADA section of the SRV.

Sheryl Lynn Bergeson, daughter of DeSoto park board member Marearl Denning, died in an accident a few years before Stevie Ray Vaughan's passage. Joe Cook, Stevie Ray’s uncle, wrote a poem about them. The city installed it on a small monument in the preserve's Duncanville Road parking lot:

I know a quiet place called Windmill Hill
Where nature and the city touch, must have been God's will
Where the wind and its spirits ride hand in hand
And wander over this little stretch of land
Where memories of loved ones now and of past
Tug at your heartstrings, we pray they still last
Come walk our trails where the wind blows free
And remember our friends, Sheryl Lynn and Stevie 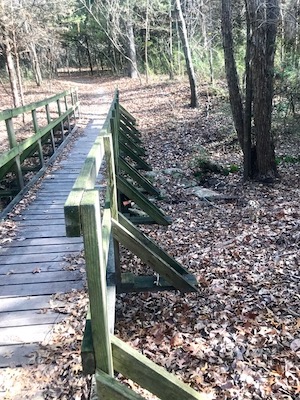 A bridge made by Boy Scouts features shock-absorbing sides for off-road bicycles. Photo by Amy Martin.

Loops upon loops of trails spin off the SRV, each boasting a unique character, all hand-crafted with love by volunteers. Developers of paved paths gain the glory for their creation. For trails such as these, kudos go to the people whose meandering routes showcase how intimately they know the terrain, where the water flows in all types of storms, which trees and plants to spare, and what benefits wildlife the most.

"Give people ownership and let them know that this is their park," says Dryer while walking one of these trails. "Our parks are our commons for those who can't afford the lake lot. If you let people know that they own this and that they have power over it, then they start taking care of it. That's how I keep 99 percent of the trash picked up."

"Give people ownership and let them know that this is their park," says Dryer while walking one of these trails. "Our parks are our commons for those who can't afford the lake lot. If you let people know that they own this and that they have power over it, then they start taking care of it. That's how I keep 99 percent of the trash picked up."

A second drainage crossing of the SRV Trail features an Eagle Scout project wooden bridge. At a neighbor’s urging, Oncor donated and hauled in two massive telephone poles for it and secured the ends with concrete slabs. It features shock-absorbing sides to soften the impact of off-road bicyclists zooming down the adjacent slope who might slide into them. Scouts created erosion-abatement steps on the slope using bags of ready-mix concrete that soften with rain and then meld into place and harden, looking much like rock. 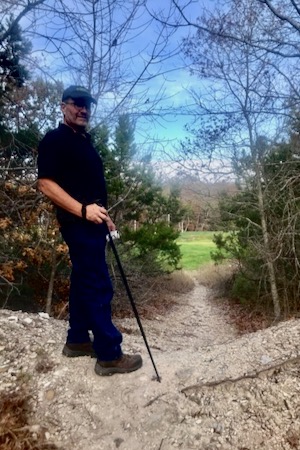 Paul Dryer atop a rock berm installed to prevent incursions from ATVs and motorbikes at Windmill Hill Preserve. Photo by Amy Martin.

Dryer does more than oversee projects by Eagle Scouts at the preserve. He teaches them civic-mindedness.

"They meet city council members and go to the park board to present their projects. Girl Scout troops do the same. Some of the kids were not even aware there were such things as a city council and park board. So I get them involved in city government to see how all this works."

Dryer also enlists help from hikers he comes across.

"When I meet people on the trail, I strike up a conversation and encourage them to bring loppers to keep the trail clear from junipers and privet and pick up trash,” he said. “They will do thaxt. And they'll tell their kids to do that. So it's like a giant pyramid scheme. Just strike up one little conversation with someone, and that can go a long, long way."

"When I meet people on the trail, I strike up a conversation and encourage them to bring loppers to keep the trail clear from junipers and privet and pick up trash.”

But it's not just the volunteers who help, notes Dryer.

"The city of DeSoto has been amazing with equipment and support. It's been a total reclamation."

Dallas County commissioners as well: "John [Wiley] Price has been our biggest advocate for the entire history of this park. He has always had our back, always helped us out. We rely on him. He's done so much for the southern part of the county."

Stopping beneath a massive pecan that survived developer destruction, we muse on the similarities between experiencing nature and live music. Both are a combination of sights, sounds, events and actions, creating moments that can never be replicated. Isn't that the wonder of existence, I ask?

"Yes," he replies, "That's why we're on Earth. I look at this park as kind of an art thing. You put your heart and soul into it. This place owns us. It's not the other way around."

Dallas park to be named for crusader of ‘rewilding’