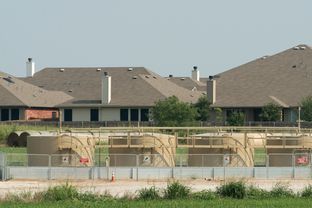 A gas well fracked in March sits less than 400 feet from a home in Denton, which just became Texas' first city to ban fracking. Photo courtesy of Cooper Neill/Texas Tribune.

A North Texas town on Tuesday became the state’s first to ban hydraulic fracturing, setting up a high-profile property rights clash likely to be fought in courtrooms and the Legislature.

Nearly 59 percent of voters in Denton, which sits on the edge of gas-rich Barnett Shale, approved a measure banning hydraulic fracturing, or fracking — the method of oil and gas extraction that has led to a domestic energy boom.

Proponents called the measure a last-ditch effort to address noise and toxic fumes that spew from wells just beyond their backyards, after loopholes and previous zoning decisions rendered changes to the city’s drilling ordinance unenforceable.

The ban’s passage will almost certainly trigger litigation, with energy companies and royalty owners arguing that state drilling regulations trump Denton’s and that the city was confiscating mineral rights, which have long been dominant in Texas law.

Several state lawmakers have promised to fight the ban in Austin.

A city of 123,000 with more than 270 gas wells scattered among its neighborhoods, Denton is one of several cities that have tried to ban fracking, including communities in New York and Colorado. But the prospect of such a ban in Texas — a state built on oil and gas — put Denton in a bright spotlight, rankling industry leaders and the state’s Republican leadership.

"As the senior energy regulator in Texas, I am disappointed that Denton voters fell prey to scare tactics and mischaracterizations of the truth in passing the hydraulic fracturing ban,” Railroad Commissioner David Porter, a Republican, said Tuesday night in a statement. “Bans based on misinformation — instead of science and fact — potentially threaten this energy renaissance and as a result, the well-being of all Texans.”

The Denton measure does not technically prohibit drilling outright; it would apply only to fracking, which involves blasting apart rock with millions of gallons of chemical-laced water hauled in by trucks.  But opponents of the ban say it would make gas beneath the city too difficult to profitably tap – amounting to a drilling ban.

Energy companies pumped big money into effort to defeat the ban. The Denton Record-Chronicle called it the most expensive campaign in the town’s history by far.

A week ahead of the election, the ban’s opponents raised nearly $700,000, mostly from large companies, including Chevron, Occidental Petroleum, EnerVest, XTO Energy and Devon Energy, the Record-Chronicle reported. That was more than 10-times what the ban’s supporters raised with help from Earthworks, a Washington, D.C.-based nonprofit.

McMullen acknowledged that Denton’s victory could be short-lived, with new battles around the corner.

“We know the oil and gas industry is going to sue,” her statement said.