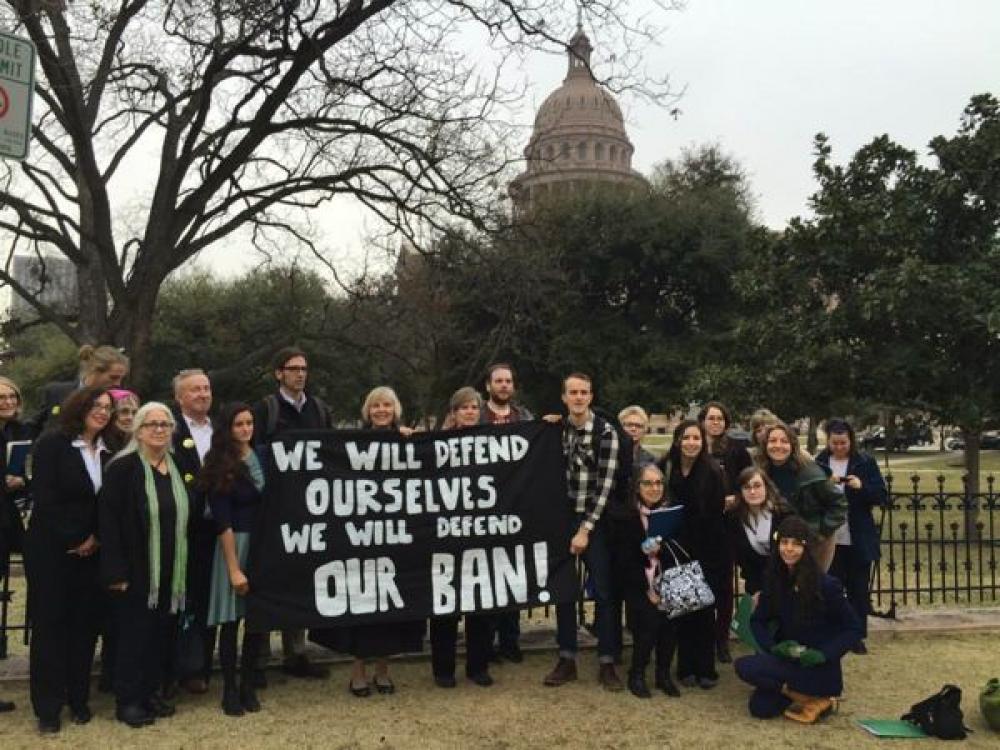 Frack Free Denton lobbyied representativies in Austin earlier this year to save the fracking ban. The group continues to build coalitions to fight fracking. Courtesy of Frack Free Denton.

Since Denton’s fracking ban was given the boot in May, those keeping up with environmental news may be wondering – is the fight over?

Only a few months before in November, Denton made headlines when it became the first Texas town to ban hydraulic fracture oil and gas drilling within city limits. It was among only a handful of cities around the U.S., such as Richmond, California, that took issues of drilling in their urban communities to a public ballot.

Denton’s move was no sudden whim. For four years, residents had worked with City Council and stakeholders to address air and water pollution, noise, traffic, and health and safety hazards posed by fracking operations in the midst of their town of 120,000.

It was a roller-coaster ride from successful citizen action to an unprecedented revocation of municipal rights by the state. Now its leaders are asking, “What’s next?”

“They were drilling less than 250 feet from homes, when the ordinance stipulates a 1,200-foot setback,” says Briggle.

Incidents including a well-head fire and a blowout at close range raised alarm. New homeowners found themselves living on property targeted for drilling, without notice of the prior sale of its drilling rights.

Then DAG learned that 11,000 acres in Denton were platted for oil and gas development, “amounting to 20 percent of the surface area of the city,” Briggs recounts. Operators were interpreting the state’s legal principle of “vested rights” to allow new wells to be “grandfathered” under earlier law.

“Operators contended that they could play by rules in place at the time of the 2004 plat,” disregarding the city’s current ordinance, says Briggle.

In response, citizens mounted an initiative for a vote to ban fracking entirely.

You saw the headlines. November 5, 2014, “Denton Bans Fracking” – by a 59 percent majority. In less than 24 hours:  “Energy Industry, Texas Sue Denton over Fracking.”

And then May 18, 2015: “New Texas Law Makes Fracking Bans Illegal.” State House Bill 40, now law, “expressly pre-empts” local regulation of oil and gas operations. Its provisions, say attorneys who scrutinized the law during the legislative process, may obstruct or halt enforcement of numerous regulations and thwart new ones by 60 or more cities around the state.

Denton City Council revoked the fracking ban on June 16, rather than try to enforce a ban now made illegal, or defend against lawsuits funded by the deeper pockets of the Texas General Land Office and the Texas Oil and Gas Association.

Opposition to fracking has not stopped, however.

What was it like for Briggle, going from helping pass the ban to its overturn by HB 40?

“Quite a comedown. It was a stark contrast from grassroots empowerment, to disenfranchisement by [legislative] politics,” he says. “But it’s not the end of the road.”

Adam Briggle following his release from Denton jail after being arrested at a demonstration at a drilling site last month. Courtesy of Frack Free Denton.

DAG has redirected its work to five fronts:

First, “We’re working to build coalitions across Texas to repeal HB 40,” says Briggle. McMullen stepped down as DAG president to pursue this effort.

The group will also encourage efforts “to elect better leaders.”

“A spinoff group may develop to help with that,” Briggles anticipates. 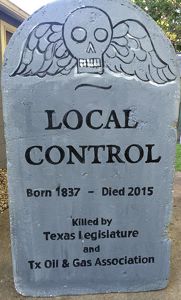 Thirdly, public education efforts will continue to be a priority.

Fourth, the group “will work on the existing 2013 ordinance.” With the ban gone, the prior ordinance is now in effect.

Lastly, related groups such as Frack Free Denton will continue to engage in civil disobedience and direct action. Arrested at recent demonstration at a drilling site, the group’s volunteer coordinator was quoted on Democracy Now, “Officers apologized for arresting us.  They said they had to…but they supported the ban.”

Cathy McMullen is now working with other cities in the state’s shale regions to form a grassroots coalition. She says “voters are upset by a repeal of a democratic vote. It’s government saying, we don’t like the majority’s rule.”

“HB 40 doesn’t have to do with political party… some ultra-conservative Tea Party people were outraged. Even people who support fracking are upset at the bill. Fracking isn’t the issue anymore – it’s government overreach.”

“We’ve stepped into a bigger battle.”

WATCH THE WFAA NEWS STORY ABOUT A 92-YEAR-OLD PROTESTER ARRESTED RECENTLY AT A DENTON FRACKING SITE.