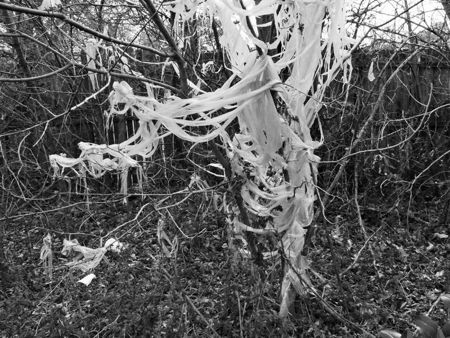 'Puppet Master' by Ken O'Toole is part of his photographic series 'Cultural Ghosts.'

O'Toole will be speaking Feb. 24 at Mountain View College.

Plastic bags found by the roadside and cardboard boxes headed for the dumpster are the mediums through which Ken O’Toole delivers his message.

The 60-year-old Fort Worth artist says the meaning of his work is both spiritual and environmental. 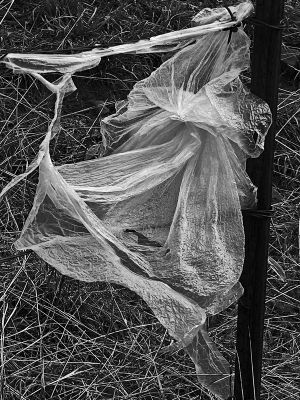 “The message, if any, is that creativity is about thought and transformation. I cannot in good conscience just make something without thinking about using what I already have, which can be transformed into something beautiful.”

O’Toole is speaking at Mountain View College in Dallas on Monday, Feb. 24, at 12:30 p.m. as part of the college’s Sustainability Speaker Series.

O'Toole says he's always doodled and played with color and text, but has only been creating ‘art’ since 2004. Environmental issues became a part of his work soon after.

It started with a series called Cultural Ghosts, a monograph of photos exploring the unintended beauty of refuse on the nation’s highways that he began in late 2006. 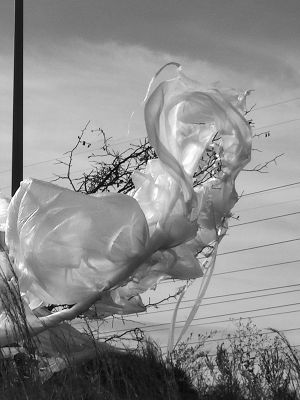 “I was driving and had to do a double take on what I thought was someone or someone's skeleton hanging in a tree. When I circled back I realized it was a huge shredded plastic tarp twisted and hanging in the trees,” said O’Toole. “After that I couldn't 'not' see them. They were everywhere. "

The result is a collection of black-and-white photographs featuring plastic shopping bags, plastic tarps, dry cleaners bags, etc that get tangled in the brush, trees and fences along the roadsides.

He said the ‘ghosts’ screamed at him for attention.

"I realized it wasn't just about the landscape and aesthetics. It was about humanity and whether we would survive our own mistakes or not."

O’Toole says he sees people in the plastic, but admits he also sees faces in the patterns of a textured wall treatment, battles in the clouds and onlookers peering from the nap of shag carpet.

“To me, abstract expressionism and action paintings are just another form of representational art. It is just the way my brain is wired. It's like my life is one continuous Rorschach test. And of course there are no wrong answers – or are there?” he jokes. 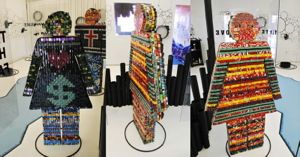 His work Quintina and her counterpart CuBert were created as part of a site specific installation in Dallas celebrating the opening of the Margaret Hunt Hill Bridge designed by Salvatore Calatrava.

“They are both life-sized

interpretations of the universal icons for male and female. Each is made from reclaimed cardboard and hundreds of pieces of folded recycled material like pizza boxes, soda and beer cartons and cracker boxes,” he explains. “The structure of each sculpture is five layers thick in order to give them sufficient weight to stand unaided. So since, the female was so festive in her apparel in addition to being five layers thick, I called her Quintina. However, each sculpture has its own individual mosaic incorporated into their design.”

CuBert sports a question mark on one side and a cruciform on the other. 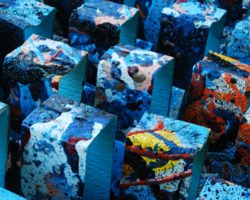 “He is asking the eternal question,” said O’Toole. “So, in tandem they speak of how we are spiritual beings on a journey through this physical realm. We are made of matter, but are much, much more than that.”

As for his plans for more environmental art, he says he is working with similar recycled material, making other smaller structures such as cruciforms, pyramids and even some 3-D canvases.

Above, detail of 'Aftershock.'

"My UnderWorks series incorporates folded paper painted in the same palette as the canvas to give the illusion of the painting coming toward the viewer.”

O'Toole's work will be on display during Fort Worth Gallery Night, March 29, at Rebecca Low's Gallery. See Ken O'Toole's website.

Rita Cook is an award-winning journalist who writes or has written for the Dallas Morning News, Focus Daily News, Waxahachie Daily Light, Dreamscapes Travel Magazine, Porthole, Core Media, Fort Worth Star Telegram and many other publications in Los Angeles, Dallas and Chicago. With five books published, her latest release is “A Brief History of Fort Worth” published by History Press. Contact her at rcook13@earthlink.net.