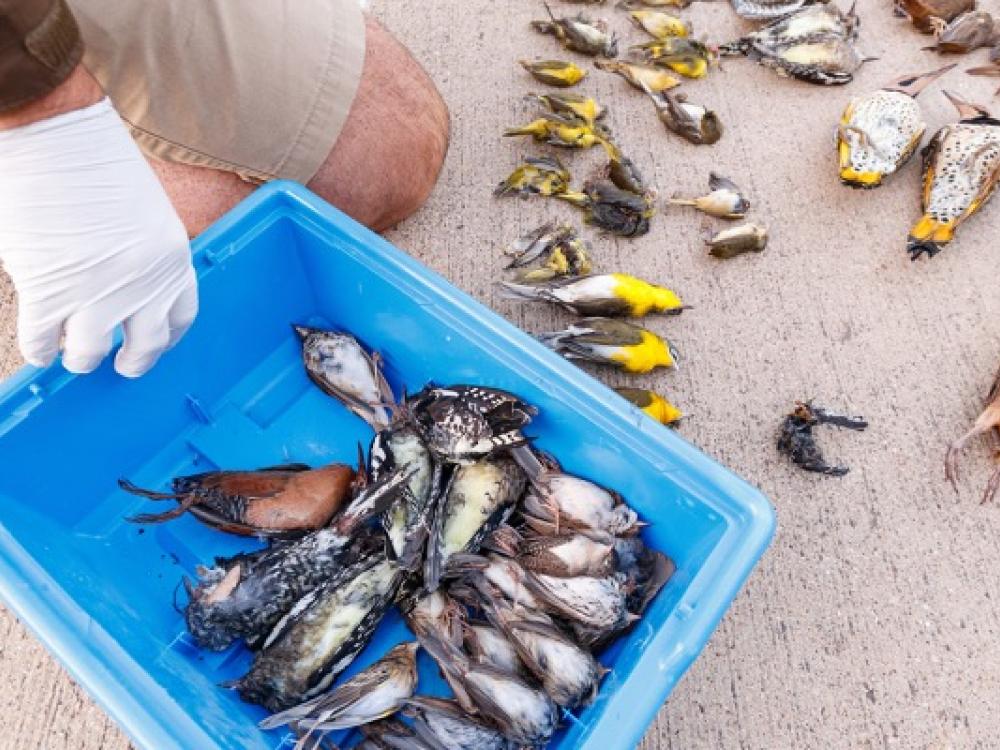 Volunteers for Lights Out Texas collected 233 birds that appear to have been killed by colliding into buildings in downtown Dallas during spring migration. Photo by Sean Fitzgerald.

Volunteers recently completed a count of dead birds in downtown Dallas, but it’s too soon to tell if a new statewide light pollution campaign has kept fewer migratory birds from running into buildings.

Coordinated by a partnership between the Cornell Lab of Ornithology and the Texas Conservation Alliance, and promoted by former First Lady Laura Bush, Lights Out Texas is a public awareness campaign that enlists business leaders, organizations and residents to turn off or dim nonessential lighting at night during peak bird migration months to mitigate one of the major threats facing declining bird populations — building collisions.

“The Lights Out Texas campaign is an education awareness and action campaign focused on turning out lights at night during spring and fall migration to help protect the billions of migratory birds flying over Texas annually,” says Julia Wang of the Cornell Lab of Ornithology.

Having kicked off the campaign last year, their goal is to increase statewide participation in the program at all levels — business, municipal and community levels — to reduce migratory bird mortality. Additionally, they are coordinating local volunteer efforts to collect and report data about bird collisions in cities. 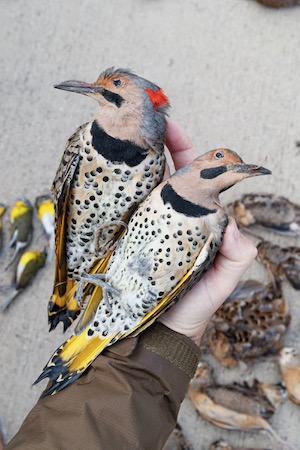 A pair of northern flickers were among the carcasses found this spring in downtown Dallas. Below them are the remains of American woodcocks and yellow-breasted chats. Photo by Sean Fitzgerald.

Humans love bright city lights but it can cause problems for birds, even death, as birds are attracted to artificial lighting.

Wang says migratory birds tend to take flight mostly at night, when it’s cooler, and use starlight among other clues to keep on track. Modern artificial lighting disrupts the birds’ natural tracking abilities and attracts them to the buildings and structures where bright lighting is concentrated. Birds have difficulty seeing glass, and therefore windows present a deadly obstacle for their high velocity.

In Dallas, one of seven Texas cities participating in the campaign, volunteers found 457 dead birds last fall and 233 this spring. In addition, over the two migration seasons, they found 71 birds who had survivied a collision but needing rehabilitation.

Wang points out that this represents only one year of migration data for the nascent campaign and each bird may represent many more that were not found. She says the count is just the beginning in the data gathering process, which will eventually show the effectiveness the Lights Out campaign will have on the species that enter the U.S. from South and Central America each spring and then head back south of the border in the fall.

The campaign began in 2017 with Houston Audubon, and then expanded with the involvement of the Cornell Lab of Ornithology at the start of last year.

She said their goal this spring was to expand from a prototype to a statewide campaign.

“And we're very happy to say that we managed to do so and saw more businesses participating across the state as well as more proclamations or other statements from cities and city sustainability offices that indicated their support for Lights Out Texas.”

Wang says seven cities and one county, Travis County, have so far made proclamations to support the campaign in Texas: Arlington, Cedar Hill, Dallas, Dripping Springs, Fort Worth, Galveston and Houston. Fort Worth has additionally made a pledge for fall 2021, and Dripping Springs made its pledge in perpetuity for both the spring and fall season. Wang says she expects all the cities will continue to participate in the coming years.

“We're hoping that cities renew their commitment in protecting birds using the Lights Out Texas guidelines through this fall and moving forward as well. So we're currently working on outreach for that. But this last spring, we also saw 36 businesses confirm participation in turning out lights across the state,” Wang says.

Among the 36 businesses that participated were Chase Bank Tower, Reunion Tower and the Trammell Crow Center – all in Dallas. In Fort Worth, the Pier 1 Building, Wells Fargo Tower, and Bank of America Plaza all went dark. Elsewhere in the state, the Marfa Public Library, ConocoPhillips, Sundt Construction and Phillips 66 all turned off lights for the birds. 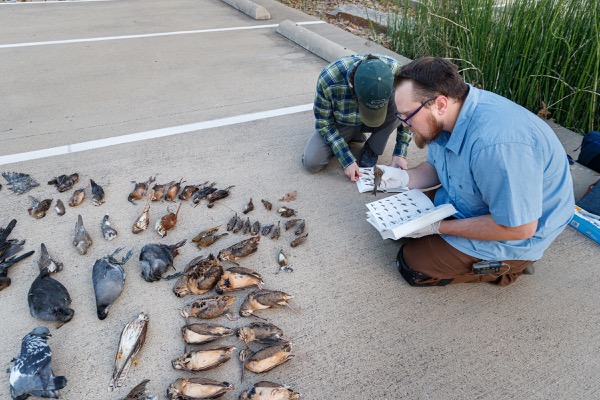 Ben Jones, executive director for the Texas Conservation Alliance, says Dallas is behind only Chicago and Houston as the riskiest cities for migratory birds. The species that volunteers found among the spring and fall casualties in the city reinforce what past research has revealed. Rails, woodcocks and a variety of sparrows ranked high among the 73 species known to be affected by building collisions. Researchers estimate up to one billion birds in the U.S. are killed every year by the phenomenon.

Jones says Texas is a key state in addressing the problem. A casual glance at a map shows that a great portion of the central flyway path from Canada and all across the country down to Mexico and Central America funnels right through Texas. For the billions of migratory birds that make the twice-yearly trek, large, brightly lit urban areas are like a mine field to cross.

“One thing people don't recognize that should be a source of pride for us is that Texas plays a really critical role in the health of the nation's bird populations,” Jones says. “We anchor the central flyway, and an estimated two billion birds fly over Texas, every year. To know what they go through and what they achieve every year — extraordinary feats — just kind of makes you want to be in their corner and really help them out where you can, especially with simple action.”

The campaign therefore calls for all cities, businesses, organizations and residents to turn off nonessential lighting and to take measures to prevent undue wasted light from 11 p.m. to 6 a.m. during Texas’ peak migration months. The spring migration peak takes place from March to mid-June, and the fall period is from mid-August through the end of November.

Wang says turning off lights, closing curtains and making sure that essential lights are shielded so that they don’t cast their light toward the sky are all helpful actions, as is controlling security lights with a motion detector. Bright light near vegetation is especially attractive to birds. She also says that every business, church or residence that goes dark has a huge effect on mitigating light pollution.

“Essentially, every light counts, and we hope that everyone is able to participate in Lights Out Texas, because it takes a community to make this work,” she says.