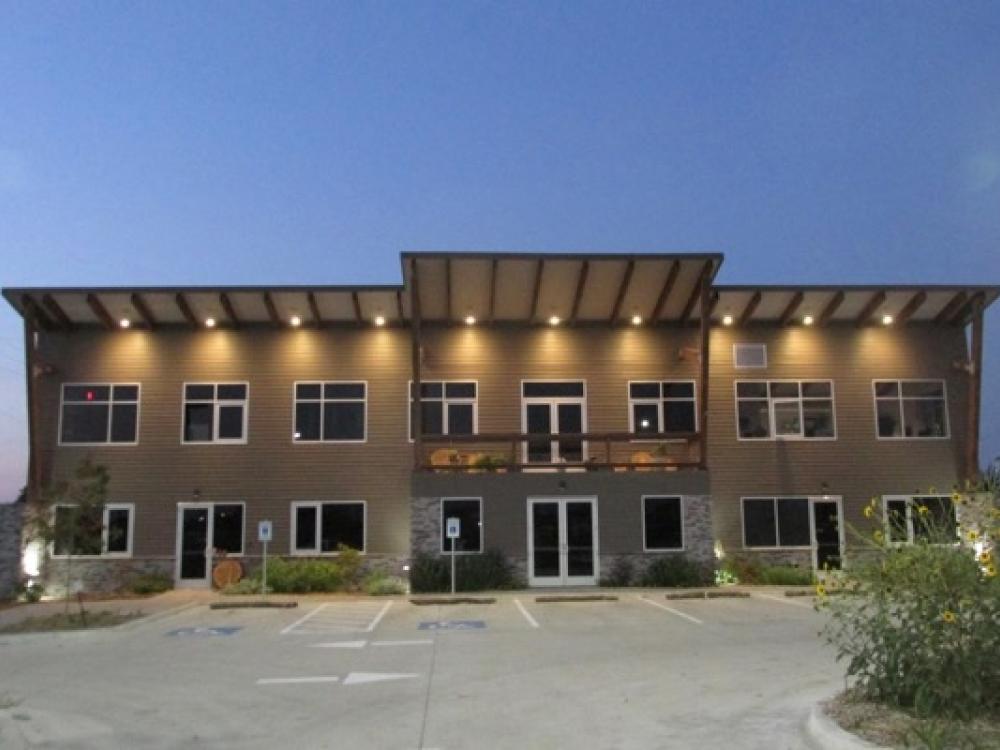 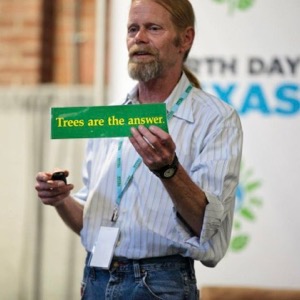 Leave it to a tree enthusiast to build one of the greenest office spaces in North Texas. The new headquarters for Arborilogical Services in Wylie was tailored to treehuggers says Steve Houser, owner of the 37 year-old tree maintenance company.

“Our intent was designed to be as green as we could get but not be ugly and it had to include wood, since we are a group of arborists,” said Houser, who is a longtime tree advocate as well as a founding member of the Texas Historic Tree Coalition.

Built in 2017, with landscaping and a few odds and ends still underway, the nearly 5,000 square-foot building generates most of its own power on site. With rooftop solar panels, rainwater collection tanks and a geothermal air conditioning system, the building includes a long list of sustainable features that make the office space a model of attractive eco-friendly design. 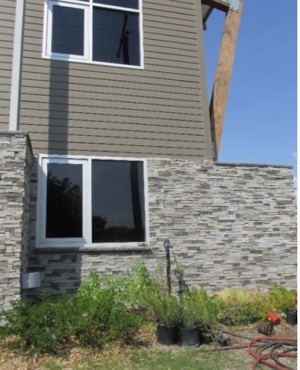 The two-story facility has the appearance of a building built of wood and stonework, but the walls are actually made of recycled concrete that’s been crafted to look like conventional construction materials. Layers of recycled content with a concrete core form the highly insulated outer walls to create an exterior that reduces the energy needs for keeping indoor temperatures warm in winter and cool in summer.

The siding and stone are made from recycled concrete.

Additionally, the building taps into the constant underground temperatures of the earth to create a comfortable climate inside.

“A geothermal system was installed to heat and cool the building at a very minimal cost,” said Houser. “There were 18 wells installed at a depth of 300 feet. The liquid pumped from the wells and through the lines comes into the building at approximately 68 degrees year-round. It only requires a small amount of energy to provide air conditioning and heating. Air conditioning is among the largest expenses for electricity in most commercial buildings.”

A wholly unorthodox feature, says Houser - the windows open up to let fresh air flow inside when the weather is pleasant, unlike most commercial buildings 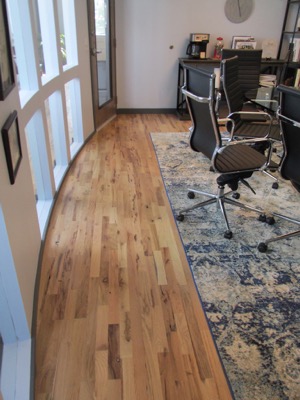 “All windows are commercial grade, energy efficient and plentiful, with strategic placement to reduce the need for artificial lighting and to help reduce the stress of working in an office,” he says. “The south wall also includes an overhang that allows for more sunlight in the winter months yet limits the amount of sunlight in the summer months for additional energy savings.”

Additionally, Houser had the exposed areas of the roof painted white to reflect sunlight that would otherwise turn into heat on typical, dark-colored rooftops and raise the surrounding temperatures outdoors in what’s known as the heat-island effect. The heat-island effect contributes to climate change.

The windows open up to let fresh air flow inside when the weather is pleasant, which Houser says is a wholly unorthodox feature among commercial buildings.

LED lighting illuminates the building with minimal power consumption. To save energy and water resources, tankless water heaters were installed.

“They run on natural gas and only heat water when there is a demand,” Houser says. “Eco-friendly solar shades were purchased for the windows to help reduce energy costs and provide more privacy at night.”

Making efficient use of the building’s footprint on the land, the rooftop also slopes at the optimum angle for sunlight to reach 236 90-watt solar panels, which generate just under 65 kilowatts of power. The output is more electricity than the office space needs, so Houser sells the excess power back to the power company, thus earning his business a monthly income from its renewable-energy investment. In just the first five months of the panels being up and running, he’s already seen a significant savings in energy costs. 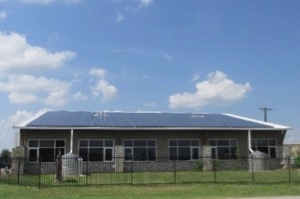 “We did not get the solar panels installed and running until early August of last year. The bottom line is that we spent $1,532 in energy costs for five months or about $306 per month,” Houser says. “The average electricity cost for a 5,000-square-foot building is around $1,417 per month. In other words, we save around $1,100 per month in energy costs.

As to reducing the company’s CO2 emissions, Houser says the panels have produced enough clean energy in just half a year of use to be the equivalent of offsetting 31,000 miles of travel by car.

“The earnings will not be as great in the winter months but the savings are substantial. The actual savings is forecasted to be much higher with income generated from excess green power that we do not use. The projected income and savings will increase as the cost of energy increases over time,” Houser adds.

The solar array does not yet have battery storage, so the building draws power from the grid at night. The solar panels therefore supply power during the workday when the demand is greatest. 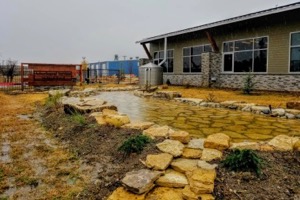 Houser designed the landscaping around the building to conserve water using drought-tolerant native trees, shrubs and grasses. Two 1,600-gallon metal water tanks collect rainwater from the roof and supply supplemental moisture to the landscaping during the dry, summer months. When the tanks fill up during a downpour, the overflow is channeled to a retention pond on site where the water can pool up until it seeps down into the soil and replenishes the area’s ground water supply.

Houser also wanted the new building to enhance the experience of passersbys. So, the view from the street showcases the building’s green features, and the parking lot is in the back.

“It is much more attractive to see the building, rainwater tanks, cool landscaping and retention pond versus more parking lots,” Houser says. “It took a little more land to do it, but it adds greatly to the aesthetic appeal of the street.”

“It is much more attractive to see the building, rainwater tanks, cool landscaping and retention pond versus more parking lots.” 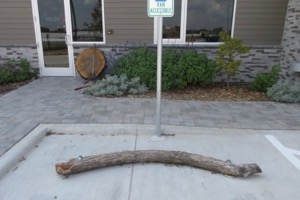 Inside the building, the lower level opens into a spacious lobby where a polished concrete floor makes attractive use of the building’s foundation without short-lived, disposable carpeting or the need for additional flooring materials.

“The upper level flooring is made of number three-grade lumber, which is considered a poor grade for flooring and is often discarded, but has a great deal of character,” Houser says. 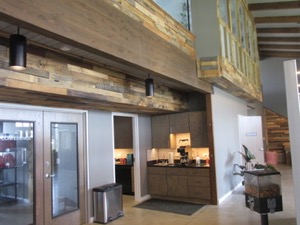 Throughout the interior, stained wood frames the lobby, windows and doorways.

“As a tree care business, it was also important to include quite a bit of wood as a primary material in the design. The use of wood was emphasized with unique and creative wood accents in various parts of the building,” Houser says. “All office desks are made from bamboo, a very sustainable, or recyclable, material. For health-related reasons, all desks raise and lower to allow working in a standing or sitting position.”

Even the parking lot features a nod to the tenants' occupation.

“Instead of parking bollards, we used bois-d’arc logs as bumpers as a form of recycling and to extend the character of the building to the parking lot area.”

Although some additional planning and costs were required to create the environmentally sound office space, Houser says the results are justified by both the energy savings and the beauty of the building both inside and out.

Departure from conventional construction practices often throws city inspectors for a loop, but Houser says Wylie officials understood his vision from the start.

“I served on the board of advisors for Vision North Texas since shortly after its inception and had the opportunity to work with many governmental officials throughout the region over the years. Fortunately, some of the officials were from Wylie and were educated about the importance of better urban planning and responsible land use,” Houser says. “The Wylie City Hall has quite a few green features. In discussing our plans with city officials, they were very receptive due in part to their involvement with Vision North Texas. At one point, I noted that our new office will be greener than their new City Hall and they frowned at first, then they laughed.” 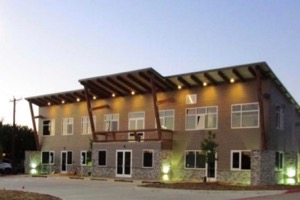 Not all of Houser’s vision made it into the new building design though; because concrete smothers neighboring vegetation and creates a storm water runoff problem, Houser had hoped to make the parking lot as eco-friendly as the rest of the building but was told that his plan wouldn’t work.

“We wanted to use permeable concrete because it reduces storm water runoff, helps to recharge ground water, and tree and plant roots grow better under it versus standard concrete. Our engineers would not approve it and other permeable surfaces such as pavers, do not hold up well on clay soils. Very begrudgingly, we used standard concrete. However, we plan to add a few more parking spaces using pavers or another semi permeable surface and designate them for light weight vehicles or bikes.”

The building serves as office space for the staff of Arborilogical Services, and Houser credits his employees for sharing his goal of creating an eco-friendly building designed with both sustainability and aesthetics is mind. As for the results, he’s especially proud of a couple of features which he’s happy to show off to groups of interested people who’d like to tour the facility.

“The overall building is a source of pride due to all the many green features. However, the rainwater tank and retention pond, and the logs in place of parking bollards, stand out as being unique,” Houser says. “Almost every decision a business makes can help our environment if we think and look outside the box. We are all responsible for kind of world we leave our children and we always try do our part to be good stewards and leave the world a little better place.”