Dallas pipeline protestor to be honored at Peacemaker awards 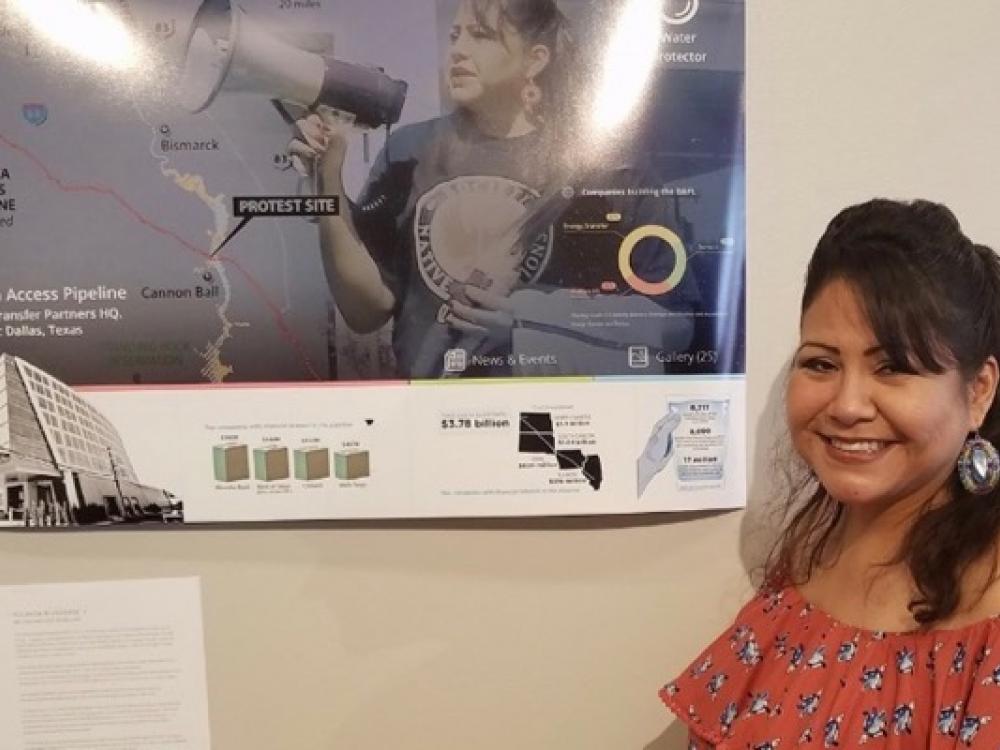 A North Texas woman known as a warrior against corporate polluters and a voice for indigenous people will be among the honorees at the 2017 Peacemaker Awards Banquet hosted by the Dallas Peace and Justice Center next week. 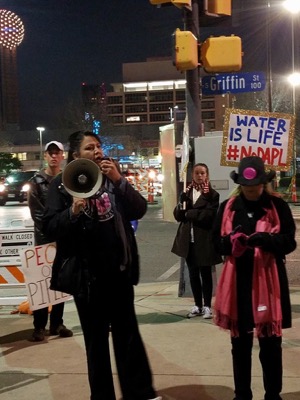 Dallas-based activist Yolonda Blue Horse will receive the Justice Seeker of the Year award at the event, set for Thursday, Nov. 30 at 7 p.m. at the DoubleTree by Hilton Hotel in North Dallas.

Blue Horse was thrust into activism in 2000 after the murder of her two-year-old daughter compelled her to take up a five-year search to find her daughter’s killer as local law enforcement faltered. Eventually, she found herself defending other victims for whom the legal system had failed, ultimately serving on the board of directors for the homicide victim memorial in Euless.

A member of the Lakota People and of the Rosebud Sioux Tribe, Blue Horse’s efforts later evolved into a campaign for indigenous rights. In recent years, she cofounded the Society of Native Nations in Texas, an organization that works to preserve the spirituality and culture of indigenous people.

In 2013 prior to the media attention gained by the pipeline conflict at Standing Rock Indian Reservation, she met with members of the Rosebud Reservation who were traveling through Dallas and arranged to have them speak on a local radio program about their protest of the Dakota Access Pipeline that could potentially pollute tribal lands. The experience made Blue Horse aware of the destruction the pipeline would cause to Native American communities and led her to stand up for the people she saw as victims of corporate greed and corrupt politics.

“That was my first awareness about what these pipelines can do to the land and how this huge oil company was just going to try to lay the pipeline down through tribal land,” says Blue Horse. “This is my own reservation where I’m enrolled at and where my mother’s family is from. That was my first introduction.”

“That was my first awareness about what these pipelines can do to the land and how this huge oil company was just going to try to lay the pipeline down through tribal land,” says Blue Horse. 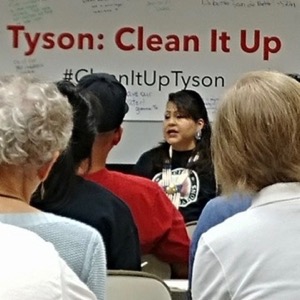 Blue Horse says that when the conflict at Standing Rock escalated in 2016, she learned that the company building the pipeline, Energy Transfer Partners, was headquartered in Dallas. She and members of the Society of Native Nations then set out to make their position known to CEO Kelcy Warren.

“We held over 15 rallies in a span of four or five months, from protests to rallies, prayer vigils, to divestment actions, right in front of the [ETP] headquarters,” Blue Horse says.

Blue Horse and other environmental defenders have simultaneously taken on the fracking industry as a whole and also the Trans-Pecos Pipeline south of Marfa, Texas.

“We had an encampment down there, and a lot of our mentoring came from Standing Rock,” she says. “We were there for three to four months, trying to stop the last building of the Trans-Pecos Pipeline from going under the Rio Grande,” Blue Horse says.

The bulk of Blue Horse’s work involves speaking at events and demonstrations, helping her audience to understand the toll taken on environmental quality and human health by faulty oil pipelines and the fracking activities.

“We held over 15 rallies in a span of four or five months, from protests to rallies, prayer vigils, to divestment actions, right in front of the [ETP] headquarters,” Blue Horse says. 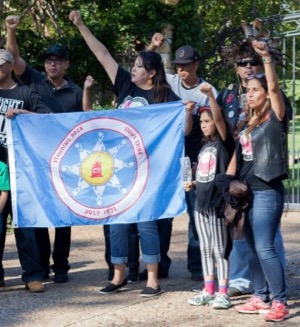 Yolonda Blue Horse led a march in September to the home of Kelcy Warren, CEO of Energy Transfer Partners, the Dallas company that built the Dakota Access Pipeline.

“A lot of people are not educated on how these industries can pollute our resources and how involved the oil companies are with our own government, donating thousands and millions of dollars to what are supposed to be our representatives – but they’re not.”

Blue Horse says her work and the efforts of the Society of Native Nations are for the benefit of all people. Therefore, her speaking engagements are aimed at a diverse audience.

In her vision of how we can meet the energy needs of society and protect the earth, current energy production methods are phased out as the nation gradually shifts to renewable energy technology.

“It’s going to begin with us talking, because talking raises awareness. Hopefully, the fossil fuel era is coming to an end. I’ve read recent reports that even Saudi Arabia is trying to get away from its oil investments, and it’s going to take us talking here in the United States to get more people standing up and being aware of who we’re putting into office,” Blue Horse says. “It’ll take generations to come before we change our way of thinking about the resources that we’re pulling from the earth and how we’re polluting the earth and how these massive oil companies are affecting climate change.

“Being native persons, we are the stewards of the land and it’s our responsibility to take care of the land. Our culture and our spirituality depend on the resources that these oil companies take for granted. The water, the earth, the rocks – all of Mother Earth is our church – the church of indigenous people.”

Whenever she sees a shift in in the minds of her audience by the end of her presentations, Blue Horse says she feels that she’s accomplished her goal.

“Our victories come from educating people, intriguing a group of people to listen to someone share how important clean water is and someone else share the facts exactly what these fracking sites are doing,” Blue Horse says. “These victories come in little bits and pieces. But once we educate people, and they listen, that’s a victory for all of us because that one person will go back and tell five more of their friends what they’ve experienced and how important it is.”

Rita Beving, an organizer for the Dallas Peace and Justice Center awards, says Blue Horse “is a stalwart for environmental and social justice.”

“She has worked tirelessly for what she believes in and for the protection of others and our natural resources, both here in Texas and across the heartland of the United States,” Beving says.

Blue Horse says she feels honored to receive the center’s 2017 Peacemaker Award. She’s quick to extend gratitude for her colleagues in the Society of Native Nations and local nonprofits when asked about the formal recognition of her work.

“She has worked tirelessly for what she believes in and for the protection of others and our natural resources, both here in Texas and across the heartland of the United States,” Beving says.

“I’ve had some wonderful mentors from the environmental groups in the Dallas area, and they have all been there to support native people in their fight to protect this earth. I can never thank them enough,” she says.

Tickets for the banquet may be purchased online through the center’s website and cost $75 each. Part of the proceeds from the event support the Dallas Peace and Justice Center, a nonprofit 501(c)3 organization that works on issues of peace and social justice.

Where: DoubleTree by Hilton Hotel in North Dallas, 4099 Valley View Lane in Dallas.

Standing Rock film screening in Dallas to include panel

Energy Transfer Partners protest to be held in Dallas on Friday