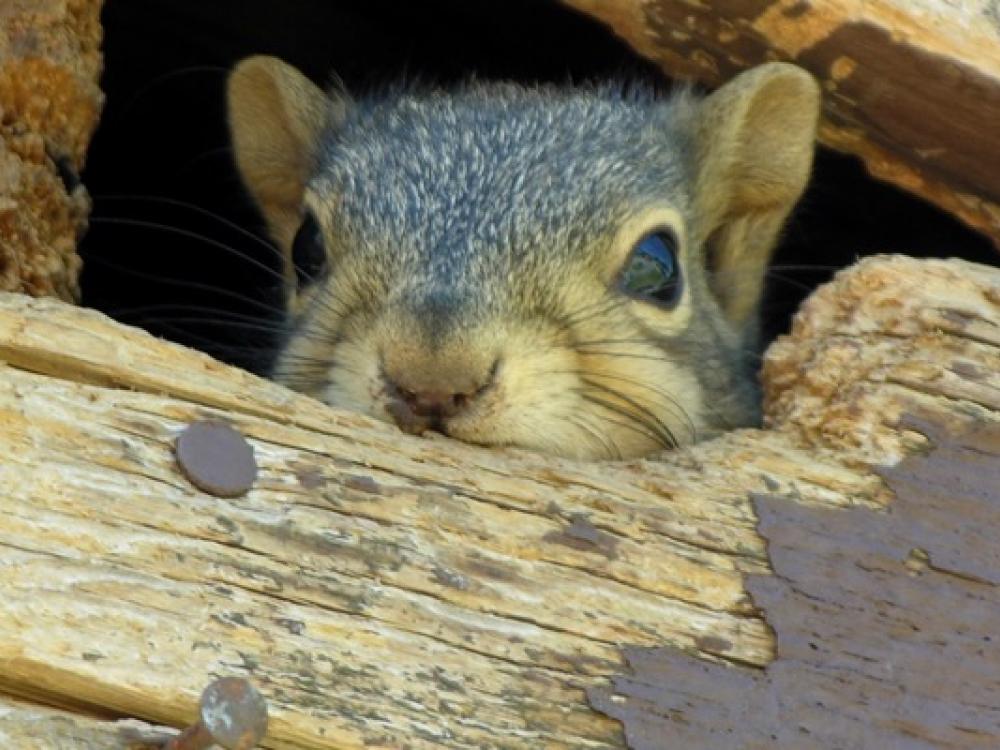 Squirrels and raccoons are the most common critters to make their way into homes. Photos courtesy of Bonnie Bradshaw.

Saving animals is addictive. We rarely are privy to the full impact we have on the world. With wildlife rescue and rehabilitation, it’s right there in front of you — until you’re hopefully able to release back to the wild. To hold an animal that would be dead if not for your efforts is rewarding to the extreme and exhausting as well.

That’s what Bonnie Bradshaw learned as she got into the field, moving from public relations, to Texas Master Naturalist and wildlife volunteer, to owner of 911Wildlife, a highly successful Dallas-based company that solves urban wildlife issues humanely. All because she got distracted at work.

“It was a busy day, the usual mundane stuff and I look outside at the window, and there was a mockingbird singing its little lungs out. No one else in the room was even aware of it. I thought ‘I’ve got to get out of here’,” said Bradshaw.

Showing that what brings you joy will indicate what your avocation should be, Bradshaw recalled her East Dallas family’s epic two-month summer vacations exploring natural places. They’d camp and hike and follow park rangers around, absorbing all the knowledge.

Invigorated by the Texas Master Naturalist training — “Summer camp for grown-ups” — Bradshaw became an enthusiastic volunteer and student, at times working in a professional mode. She took an intro to wildlife rehabilitation — “It was kind of a whim”— and began assisting a licensed rehabilitator. Then came a bucket of baby possums pulled out by a chimney cleaner on a day when the usual rehab was full, and off she went.

“It kind of takes over your life. As every wildlife rehabilitator will tell you, it’s a bottomless pit,” said Bradshaw. 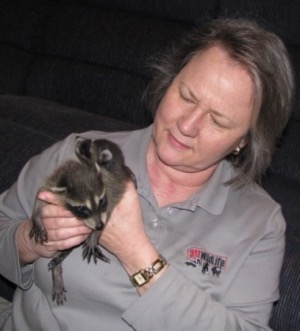 Bradshaw soon learned the supply of orphaned wildlife was endless, most of it caused by pest-control companies. They’d trap adults, but abandon the litter in the attic, leaving customers to endure pathetic cries or the stench of decaying bodies. Or the technician would take the litter, call wildlife volunteers and threaten to drown the babies unless rescuers stepped in – pocketing big profits and leaving rehabbers with the major expenses of animal food, caging, medicine and vet bills.

These pest-control companies routinely tell customers the wildlife will be handled humanely by trap and release, when actually the animals are killed, either directly or indirectly.

“The biggest misconception out there is that trapping and relocating wildlife is a humane thing to do. That’s a fantasy. All of the radio collar scientific studies have shown that when animals are trapped and relocated they usually live a maximum of two weeks,” said Bradshaw.

“They’re completely disoriented, no idea where to find food or shelter. And if they do, animals are territorial. Released animals are seen as an invader and competitor by the other animals in that territory. They die in territorial battles or get hit on the road trying to find their way back to their territory.”

Nor does trap and release fix the problem. Wildlife does not live in urban areas because they're pushed from their natural habitat by development. They chose to live in cities for their abundant food and shelter. Bradshaw stated there are 50 times more raccoons, possums and squirrels per acre in even highly urban areas than rural ones.

“A rural raccoon would have a litter or three or four. In the city, they have litters of six or seven because food is so plentiful. That’s why there’s an endless supply of them,” said Bradshaw. “When you trap one, it puts up a flashing vacancy sign. Animals are always looking for undefended territory. Another will take its place in a day.”

Rehabber to the rescue 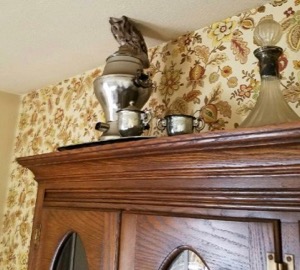 After years on the wildlife rehabilitation front line, Bradshaw had another quirky epiphany. A plain brown envelope with no return address arrived. Inside was a Humane Society of the United States article on a new program for setting up rehabilitators in wildlife control companies.

An owl who had flown through an open door was returned outside by 911Wildlife in Dallas.

“Because we can do it right. We’re the ones who care about these animals. The article described how Brad Yates of Toronto transformed his pest-control enterprise into a truly humane company and gave step-by-step instructions.“ 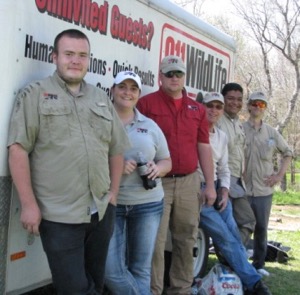 “He perfected these techniques of humanely evicting animals from human structures so that the juveniles stayed with the mother. They stayed in the territory that she was familiar with,” said Bradshaw. “Animals have multiple den sites: under a deck or shed, in a hole along a creek bank, in the hollow of a tree. They rotate to avoid predators who might stake them out..”

“It’s exploded since then. 911Wildlife can solve anyone’s wildlife problem much faster than a trapper can for less money and can solve it permanently.“

911Wildlife now has outlets in Austin, Denton, Fort Worth, Houston and San Antonio. In 2012, GreenSourceDFW named Bradshaw “Entrepreneur of the Year” for saving more than 21,000 wildlife in its first six years. 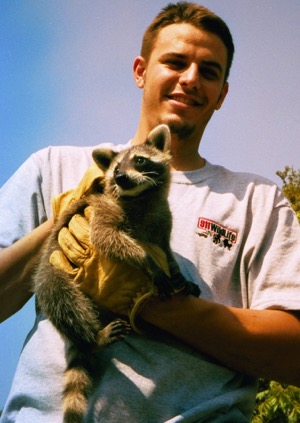 The entire property is inspected to determine how wildlife is entering. The company installs a one-way door where the animal can leave the attic, chimney or foundation, but not get back in. 911Wildlife will establish such an outlet anytime, but if a litter is present they won’t activate the door until babies ambulatory. Then the company returns and seals the hole, giving the work a 10-year guarantee.

Education about how not to attract wildlife in the first place must accompany the humane sealing of entry points.

“The best way to fix any wildlife problem is to eliminate the food source and access to den sites. That’s what we at 911 Wildlife do,” said Bradshaw. “Got armadillos? Use nematodes in the yard to reduce the grubs they’re digging to get. A big source of food for coyotes are rodents attracted by fallen seed from bird feeders. So only put out a day’s worth of seed or bring the feeders in at night. And don’t leave cat food out. It’s irresistible to everyone.”

The 911Wildlife Facebook page is full of helpful information and videos perfect for sharing. 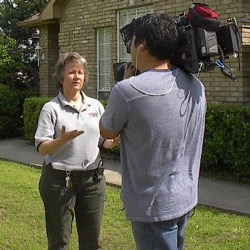 “It is a tremendous hurdle to get people to understand it’s a package deal, that if you have large trees and older homes, you will have wildlife,” said Bradshaw.

Bradshaw stressed that urbanites live peacefully with wildlife most of the time. 911Wildlife customers are often shocked to realize just how much wildlife is around them. An estimated 150 coyotes live around White Rock Lake, for instance. Citizen-scientist studies from iNaturalist and others now statistically prove and monitor these populations.

“My goal is to prevent the animals from being orphaned in the first place by making people aware there’s another option to trapping and killing wildlife,” said Bradshaw. “We must prevent native wildlife from being orphaned, injured, relocated or euthanized. The key is to offer humane, effective solutions for homeowners and property managers."