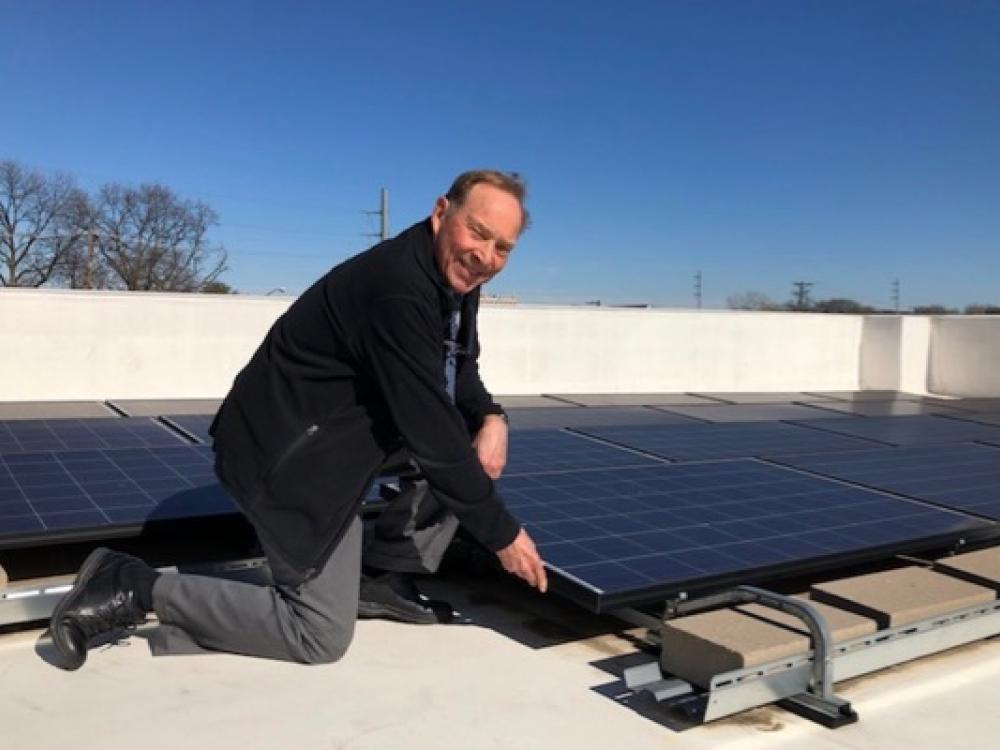 A Dallas ophthalmologist is not only an expert on vision, he’s something of a visionary.

As patients stream through Dr. John Haley’s Garland eye clinic for the treatment of cataracts, macular degeneration, glaucoma and other sight ailments, little do they realize that over their heads is a wonder of modern engineering that Haley rightly predicted would save money and energy.

It all started back in 1999 when he and his wife, Margie Haley, a local environmental activist, had some concerns about power outages that were forecasted for Y2K. They decided to add solar panels to their home. What began as a modest 2,000 watt system has been increased to 5,000 watts as of today. Their electricity-generating panels are augmented by four vintage Grummond solar water heating panels that Dr. Haley bought second-hand in Fort Worth over 20 years ago.

“They’re old but they still work,” he admits with a smile. 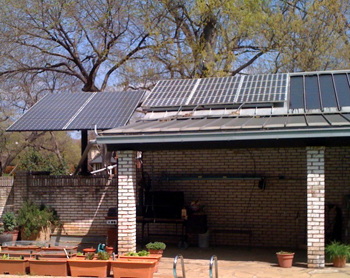 The Haleys live in a sprawling ranch home in Dallas that was designed with minimal insulation and was not very energy wise, which was typical of residences built in the 1970s. The couple increased the home’s efficiency as much as possible before installing their solar array but it wasn’t enough to make much of a dent. But now, their 15-panel photovoltaic system has resulted in a utility bill that is a fourth to a third that of their neighbors at around $300 per month.

“Most of the houses around us pay over $1,000 per month just for electricity,” says Haley.

The couple also added a battery backup system since their home is near White Rock Lake and prone to power outages. It is designed to automatically change from city power to the batteries any time that the current falls below a certain level. The batteries have come in handy on several occasions and are so quick to switch over that the family barely notices the lights flicker. They also keep a generator on hand for extended outages. 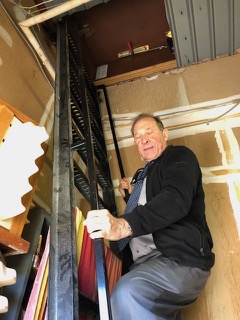 John Haley climbs the ladder to his office roof.

A few years after their home solar installation, the roof on Haley’s 18,000-square-foot office building on Forest Lane in Garland began to leak and it was determined that it needed to be replaced. Local green architect Gary Olp designed a new “cool roof” that combined a six-inch thick layer of foam insulation with a waterproof white reflective membrane. Supreme Roofing installed the new covering, which should last over 50 years. That alone resulted in tremendous energy savings. Haley, along with his partners, also upgraded their rooftop air conditioners to more efficient models.

But Haley wanted more. He and Margie were so pleased with the results from their home solar array that three years ago, he convinced his business partners to invest in solar panels for the office. Though the system initially cost over $30,000, the partners received several rebates including sizeable tax credits, an energy credit from the City of Garland and depreciation, which helped to drop the costs. Haley estimates that the system will have paid for itself in energy savings in just four and a half years. With the added bonus from the insulated roof, the office saves more than 70 percent on their energy bills.

Optician Roger Corley, one of the tenants in the building, reported that he has been pleasantly surprised by how much they have saved with the solar panels,

“Even with all of our electronics, it really makes our costs considerably lower," said Corley. "In our lab, we have a lot of 220 amp equipment and machinery. The vision lab sucks a lot of energy. I love the savings. It’s exciting to be a part of something that is doing some real good for the environment.”

"I love the savings. It’s exciting to be a part of something that is doing some real good for the environment.” -Robert Corley, optician

Haley and his partners are also on a Net Metering agreement with Garland Power and Light, which means that on sunny days when they produce excess power, that energy flows back into the power grid and creates an energy credit for them. They on days when they need more power than they produce, they can use those credits to save on their energy bills.

The whole system can be tracked on Haley’s phone or laptop with a simple-to-use app that displays current energy output, comparisons with the last three years and other useful stats.

“We’ve been very pleased with our system at the office,” says Haley, and he encourages others to follow suit. 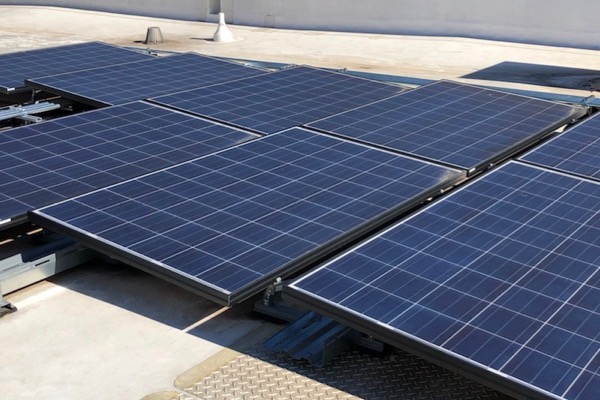 Solar panels have dramatically increased in energy generation and decreased in cost in the last few decades.

Solar panels have been around for over 100 years but they have improved dramatically in the past few decades. Local solar energy expert and member of the North Texas Renewable Energy Group Dan Lepinski provided an update.

“In the 1950s, a typical solar panel generated 20 watts - enough to power a small appliance light bulb," said Lepinski. "Today, the largest panels generate more than 400 watts, are twice as efficient, and at a fraction of the cost in dollars per watt.”

Lepinski said when it comes to efficiency, solar exceeds other forms of energy production when you consider the energy used in production. Plus it’s a much cleaner technology than fossil fuels.

“People complain solar panel efficiency is too low at 20-24 percent. Present-day automobile gasoline engine efficiency is 25-35 percent ... and this doesn't include the energy required to drill the oil wells, then pump the petroleum to the surface, transport it, refine it, distribute it, and dispense it at gas stations.” 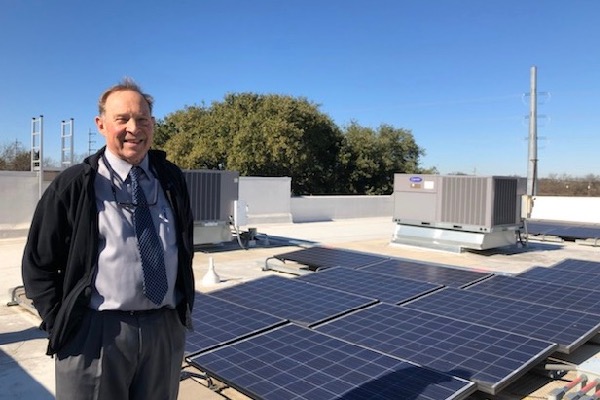 Dr. John Haley gives a tour of his solar panels in Garland.

The City of Garland has been an area leader in green technologies with their LEED municipal buildings and yearly green festival, but Haley would like to see even more local businesses take the solar leap.

“I just don’t understand why everyone doesn’t do this. It’s really a no-brainer,” Haley said.

He has been told that his office has the largest solar array in town, other than on schools or municipal buildings and hopes to share his story to encourage other companies to install their own systems.

Garland Mayor Scott LeMay was encouraging when he commented on the increase in photovoltaic panels on area rooftops as rising energy costs and concern for the environment have raised awareness in recent years.

“The City of Garland and Garland Power and Light have tried to respond to those concerns with not only energy conservation tips but also green energy choices," said LeMay. "These initiatives help our customers make the best choices within our system and also help us to diversify our energy offerings.”

Hopefully more business owners will soon have the same farsightedness as Haley and his partners and invest in solar panels for their own energy production. It’s a bright idea whose time has come.