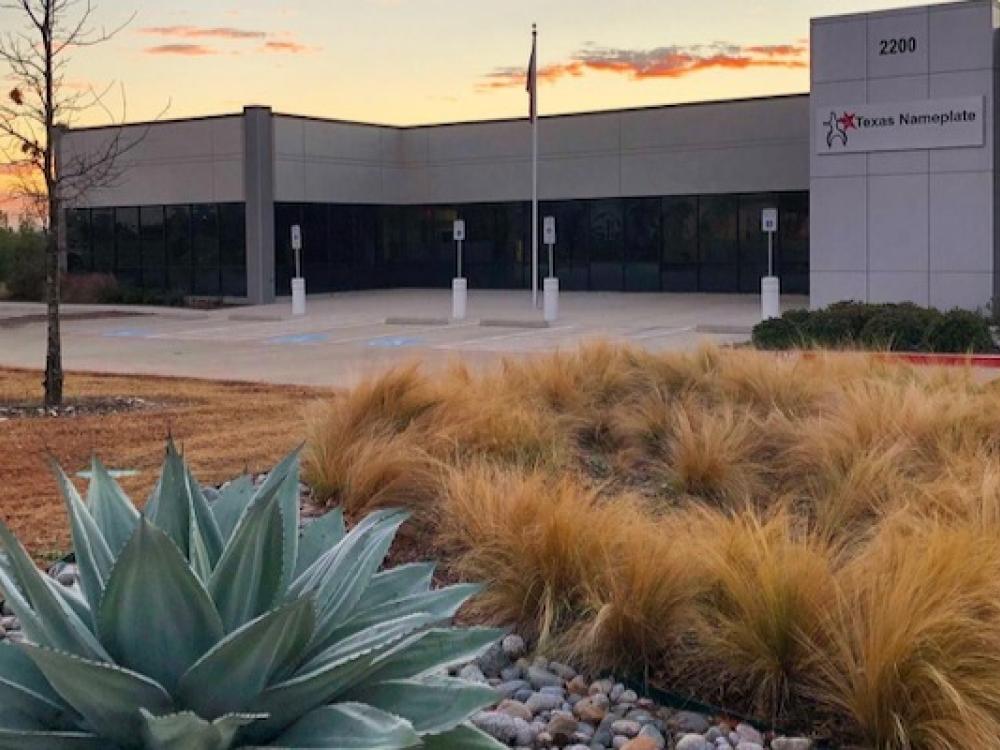 Not often do admitted polluters get hailed as an innovator for the planet. But rarely does a company turn around its record and become a leader in reducing its ecological footprint to the extent that Texas Nameplate Company has. Last week, the 74-year-old Dallas County company was honored with the 2020 Corporate Trailblazer Award at the Green Source DFW Sustainable Leadership Awards held on Zoom. 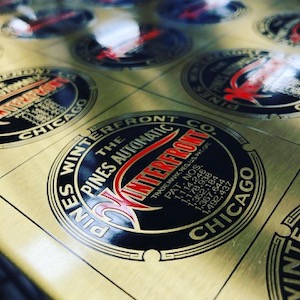 Texas Nameplate Company produces etched metal nameplates for auto engines, appliances, lawn equipment and other products. For decades, the company was a polluter of both land and air and a chronic violator of clean water standards enforced by the city of Dallas.

Back in the 1970s and 1980s, Texas Namplate CEO Dale Crownover said his lawyers knew all too well how to defend the company in court and counted the fines and legal fees they racked up as simply the cost of doing business. But then one day in 1985, as jurors were being selected for a clean water violation case against his company, Crownover had an experience that pricked his conscience and pushed this follower of the Bible to repent for his sins against people and the planet.

“The prosecutor in the case told the jurors that were selected, ‘This man right here,’ pointing at me, ‘he is more interested in making money for Texas Nameplate than he is trying to provide safe water for all you people who are here to brush your teeth with.’ And that got me. That hit home - that really hit home. And it just really bothered me,” Crowneover recalls. “That was my come to Jesus moment.”

Never one who enjoyed being on the wrong side of right, Crownover started a complex and lengthy process of cleaning his company up. He went beyond complying with existing codes and environmental law, ultimately consolidating incremental steps into a state-of-the-art facility that recently began operation in Lancaster. Today his doors are open to everyone, including competitors in his industry, to see how he’s done it so that all manufacturers can take the eco-friendly measures back to their companies and reduce their footprint on the planet too.

“I was at the age that I didn't like being in trouble all the time. So, I thought I would try to turn the tables and be an advocate of the environment and start trying to be a role model,” Crownover says. 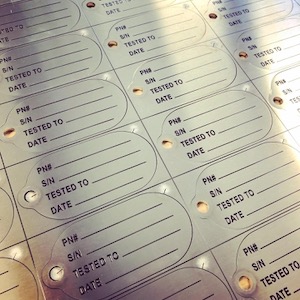 Texas Nameplate Company ships out about 15,000 metal nameplates a day. Courtesy of TNC.

The transition was no small accomplishment for an industry that Crownover says falls under the EPA’s highest designation due to its potentially hazardous processes that require using extremely dangerous chemicals. TNC makes identification nameplates, which involves an acid etching process, painting and cleaning, which altogether result in a great deal of waste that has to be dumped somewhere. The processes also emit volatile organic compounds that produce ozone when they get into the air, and water pollution from washing away the acids from the nameplates.

“We make metal nameplates that you see like on hot water heaters, air conditioners, water valves or gas valves, lawn mowers, microwaves, vented hoods, [heavy duty] trucks and trailers, F-16 fighter jets from Lockheed - product identification tags you don't think much about,” says Crownover. “But every day you see some type of a nameplate with a serial number, a model number, and we ship out about 15,000 plates per day. We generate a lot of bad stuff, so we’re under the microscope, and rightfully so.”

Chief among Texas Nameplate’s accomplishments was implementing a way to reuse the acids needed for the etching process. In the old days, says Crownover, it was common practice among companies to dispose of spent acid by just dumping it on their premises. A few companies might have had it hauled off to a facility, but those facilities were hard to come by. Texas Nameplate found a way to rejuvenate the acid it used and reduced its spent acid disposal by 70 percent, which also means that the company is consuming fewer industrial resources. 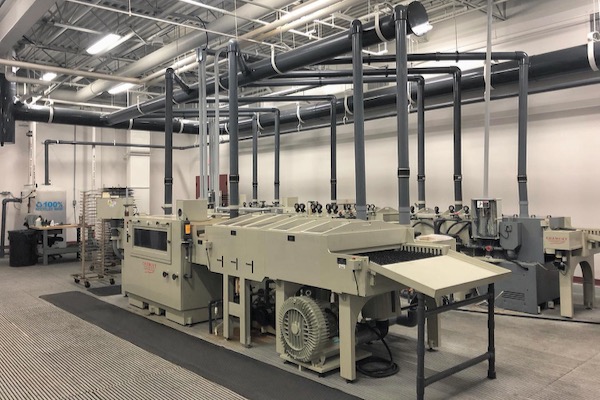 Another resource the company relied on was water, and using water to clean off the acids was what kept putting the company on Dallas’ list of clean water violators. So TNC undertook the massive expenditures on investments necessary to clean its effluent onsite and reuse the water indefinitely, which again reduced the company’s consumption of resources. It was that move that changed the company’s reputation in the city from water polluter to water protector.

“We really turned it around,” Crownover says. “We were recognized by the City of Dallas with the Blue Thumb award. We became a role model in Dallas for how to pretreat the water.” 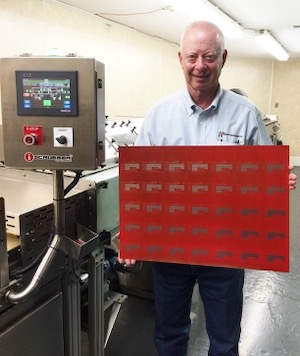 Dale Crownover with the iScrubber, Texas Nameplate Company's substrate cleaning system with a pending patent. It eliminated the use of rags and reduced their use of solvents by 98 percent, nearly eliminating VOCs through a closed system. It also reduced labor costs by 70 percent. Photo courtesy of TNC.

As the nameplates are also painted, Texas Nameplate was a large contributor to Dallas area air pollution, a result of volatile organic compounds in paint and solvents mixing with the air and other contaminants and forming ozone pollution. Tackling the VOC problem, TNC invented equipment for the industry that it was also able to patent, eliminating 95 percent of emissions and making the final processes for the nameplates far more efficient. But Crownover says, the company was already compliant with VOC regulations. The measures it implemented to minimize its pollution were more about seeing how far the company could go to protect worker health and the planet.

At this point in TNC’s turnaround, Crownover says that when there was a chance to do nothing and still comply with the law or do something and make everything all the better, he chose to make things better, as was the case when the state said the three laser cutting machines the company recently began to use didn’t produce enough emissions to warrant additional pollution control measures.

“So all we got to do in a brand new building is just knock out an eight-inch hole [in the ceiling] and put a pipe out. Is that what you're saying?” Crownover recalls from his conversation with state regulators. “Yeah, this machine is not going to put that much out that you need to do that, [was their reply]. We turned around and spent $50,000 on three, big, upright filtration systems and we filter every bit of it. We didn’t have to do that, but it’s the right thing to do.” 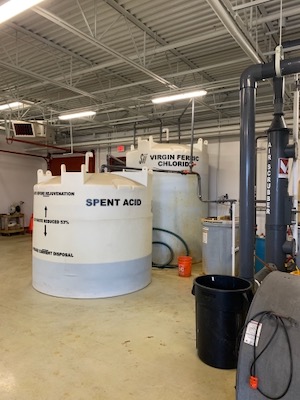 Chemicals are stored in a separate building and piped into the production process as needed. Courtesy of TNC.

Crowover says his test for worker and environmental pollution is whether or not he can bring his granddaughter to the company and feel secure about her health and safety. It’s for this reason that the new Lancaster-based facility, which opened in 2017, stores all chemicals in a separate, protected building and pipes them into the production process as needed rather than having huge stores of chemicals in the same building with the approximately 30 workers employed by TNC.

The measure reduces chemical exposure and the potential for accidents and environmental contamination, adding to the company’s ISO-14000 certification. The ISO standard is a set of internationally accepted protocols developed by the International Organization for Standardization and monitored by third-party certification agencies. TNC exceeds most companies’ ISO-9000 certification, because in addition to customer and worker health and safety, TNC prioritizes environmental protection. 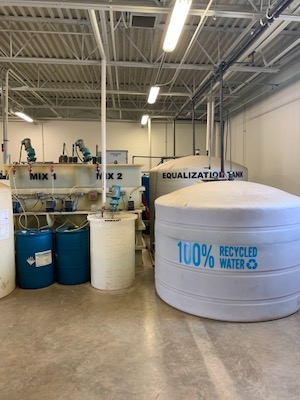 Texas Nameplate Company regularly hosts tours of their facility and shares best practices with other companies. Courtesy of TNC.

Crownover says he’s trying to leave no stone unturned in looking for ways to reduce the company’s consumption of resources. TNC is also a paper-free company, handling everything from customer orders and invoicing to product tracking, blueprints and work orders digitally. They save several dozen trees annually. That move to go paper-free prepared TNC for an easier transition to the current pandemic response. A digitally based process has enabled the remote work that’s kept the company going even while workers socially distance from each other.

Despite several environmental practices the company has adopted that cost more than the monetary return they offer, Crownover says he entices other companies and even competitors to follow his lead because there are cost savings to realize through operating a manufacturing business more safely and more efficiently. To prove his assertion, he regularly hosts tours of the new Lancaster facility and openly shares details on how he’s turned TNC from planet polluter to planet protection pioneer.

As a result of the company’s innovation, Crownover says several competitors have formed supply-chain partnerships with TNC, choosing to make the company their supplier in bringing a more cost-effective nameplate to their clients. Such arrangements help competitor companies avoid reinventing the wheel, so to speak, at their own manufacturing facilities while securing a source for a more environmentally sound product. 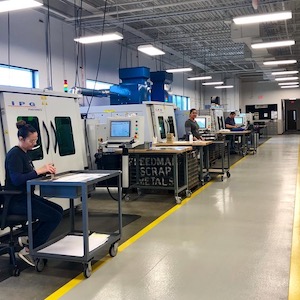 Longtime Sierra Club member and Dallas-area environmental leader Kirk Miller nominated Texas Nameplate Company for Green Source’s award after he heard a presentation by Crownover and was impressed with what he knew to be a heartfelt commitment to doing business the right way. While many companies try to greenwash their harmful practices, TNC was forthright about their record and transparent in their transition of becoming a cleaner industry.

“I’m a member of Dallas Sierra Club and I met Dale Crownover when he spoke at one of our meetings a couple of years ago,” Miller says. “And I was impressed by what his company has done to clean up the environment. And he told us that his company had polluted the environment. And they decided to stop polluting and try to be environmentally responsible. And so his story was about the turnaround that Texas Nameplate Company did. And it's quite remarkable.

“During his presentation at that meeting, and also during the follow up questions afterwards, I could see that Mr. Crownover was very sincere. He's a down-to-earth person. And he’s just very authentic. And I really admired that. They not only reduced their pollution, but they also made an ongoing commitment to continually improve their processes in order to reduce pollution on an ongoing basis. And that's something I have not seen, especially in the Dallas area.” 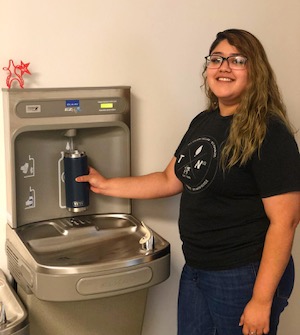 A drinking water filter for employees installed in 2019. The company has also gone paperless. Photo courtesy of TNC.

Crownover, now in his 70s, inherited the business from his father when he was 35. His two sons are now in line to take the business over from him. An outdoorsman who farms 300 acres near Italy, Texas, Crownover says what has come to matter more to him than the company’s bottom line and the numerous awards TNC has received is how he will be remembered when he passes away. As a man of faith with a deep respect for the Bible, he says how he treats his fellow man and how he’s sought to make a living in a way that still protects the planet and our natural resources constitute the legacy he hopes to leave behind.

“What I really enjoy talking about now is being a role model for the environment,” he says. “It's all biblical. If you do the right thing, you have a pretty good chance that the right thing will come back to you. And it does.”

Fort Worth distillery near Sundance Square is going solar